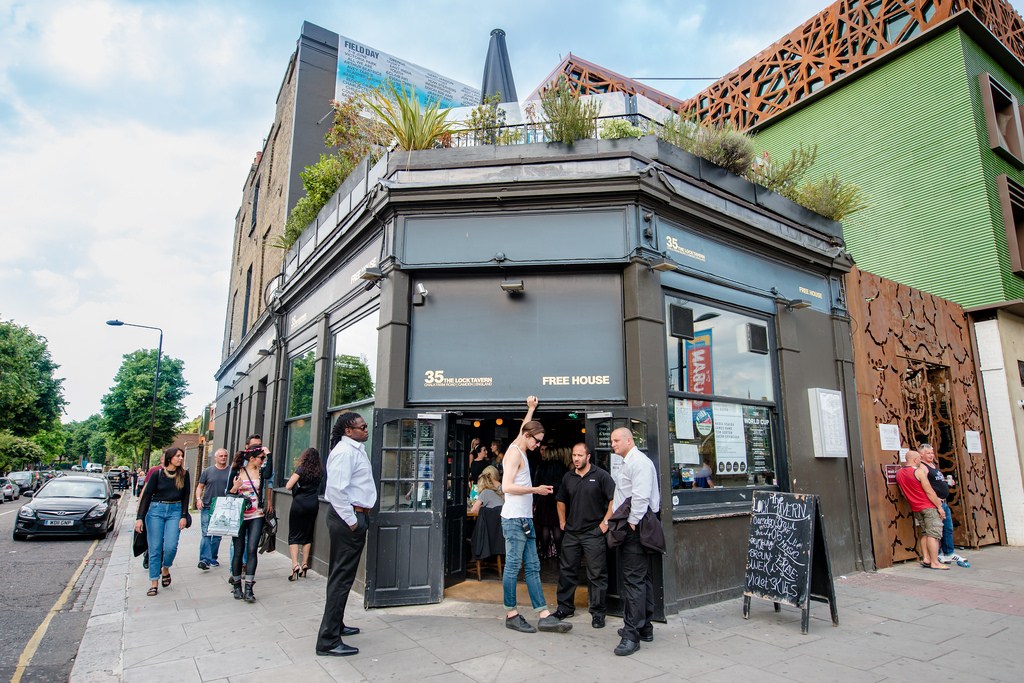 Manchester-born Tim Chadwick moved here forty years ago. So he knows a thing or two about the area's boozers past and present

In the early 1990s the Good Mixer pub in Camden Town was a quiet, back street pub mostly frequented by residents of nearby Arlington House. I was not one, but liked to play pool there; and, as it had two tables, you could always get a game.

Then a strange thing happened. It started to attract young people in droves, until by the end of 1993 you couldn’t get near it for Japanese tourists.

The reason for this dramatic overnight transformation was simple. Blur had started using it. Why? Because it had two pool tables and you could always get a game. (Well, you could till their fans showed up.)

For Britpop in 1993/4 Camden Town was ground zero: it changed the character of both the pubs and the market, and the gave them a character you can still see today. But what were the boozers like before all this?

In the early 1980s the Enterprise in Chalk Farm, now a well known music venue, was a hang out for the Rajneessh movement. Better known as “the Orange People”, they all wore coloured robes (and later red, maroon and pink clothes, at least until the middle of that decade). They also bought their Indian guru 27 Rolls-Royces. When the press asked about this, the followers merely replied: “We’d like to buy him 365, one for each day of the year.” The all-orange atmosphere could, it’s worth mentioning, be a bit oppressive.

The Enterprise was run by a Thatcherite landlord who changed the pub sign to that of a man selling ice creams to Eskimos. Music didn’t feature, but it did boast weekly pool competitions and a lock-in on Sunday afternoons when pubs were meant to close. Then, at some point in the 1990s, someone decided the upstairs meeting room could be used for live bands. And the rest, so they say, is history.

The Belmont in Belmont Street (later Bar Tok, and currently Joe’s Bar) was a musicians’ hang out because there was a recording studio directly opposite. The only tunes in the pub came from what the landlord fancied, but on different occasions I glimpsed Siouxsie and the Banshees, Mick Jones, Jimmy Nail and Lemmy in there, the latter glued to the fruit machine and a bottle of Jack Daniel’s all night.

What is now the Barfly was the original site of the Monarch. No live music either, but they did have a DJ on Saturday night (and quite a few fights). The new Monarch, when it launched in 2008 its current Chalk Farm Road spot, bagged a name DJ on opening night: Amy Winehouse, who inevitably made the papers the next day.

The Lock Tavern was boarded up until it reopened as a ‘rave pub’ a decade ago, then in 2011 it upped the music element and – sacrilege – unveiled a neon sign. A fag butt’s chuck away, the Hawley may now be notorious hangout, but in the 1970s and 80s nearby Dingwalls club was better known and hipper, and the Hawley was for those who couldn’t afford, or had been thrown out the club; a sort of ante-room.

Round the corner is the Fiddler’s Elbow, which in the 1980s was called Mother Shipton. For London buses it was a well-known stopping point and appeared on the 24 route Routemaster bus stop indicators. It also gave its name to Shipton House block of flats next door. (Incidentally, next door is St Silas the Martyr Church, probably the only Anglo-Papalist pile in the UK and one that attracted the likes of T.S. Eliot and Beryl Bainbridge, who had her funeral there even though she was a catholic convert.)

That many of these pubs have managed to stay open is quite a feat when dozens of others close and are demolished, or converted into apartments.

Only round the corner, for example, is Queen’s Crescent which used to have four pubs on its half-mile long stretch; yet of the Mamelon Tower, Dreghorn Castle, Sir Robert Peel and Queens/Monkeychews only the Peel survives.

And as for the nearby Admiral Napier (on Warden Road, near Talacre)? Well, that place was crazed in the mid-80s; drug deals there were hardly concealed and people openly smoked spliffs, all just a couple of hundred years from Holmes Road police station. Inevitably they closed it.

Fast forward to 2015 and nowadays I drink in the Southampton, the Boston and – before it too shut, at least for a few months – the Dartmouth Arms.

Got a memory about a pub in Camden or Kentish Town? Share it below or email us on info@kentishtowner.co.uk