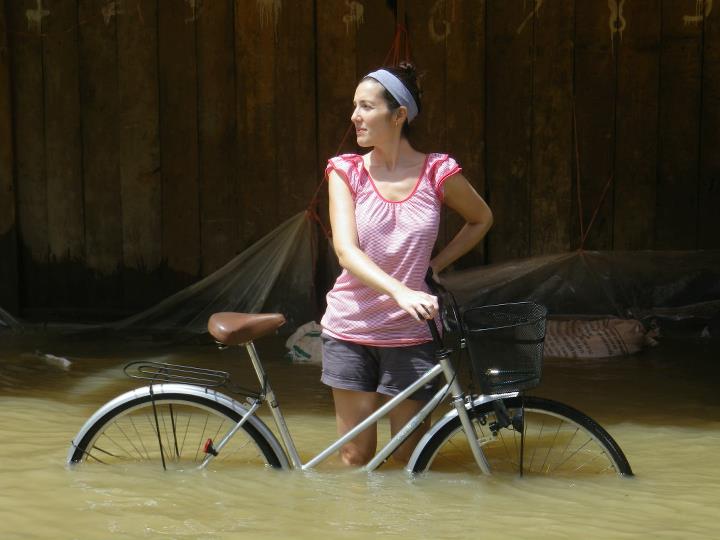 Ever fancied trading in the home comforts of north London for something a little more adventurous? Miranda Glasser did exactly that

When I arrived in Cambodia back in 2011 for a six month stint teaching English, little did I know that I’d not be returning to London for another three years. Furthermore, I never dreamt I’d come back with two years’ journalistic experience under my belt, a couple of Cambodian cats and a baby bump. Oh – and, strangest of all, as co-owner of an English language school.

My husband Richard and I had decided to swap our enjoyable but hectic life in Camden (me working in television, him in education) for a decidedly slower pace of life in the small town that is Siem Reap: think legendary Angkor Wat temples, a plethora of 50 cent beer bars, and endless clouds of red dust.

We quickly adapted to our new lifestyle in the tropics. My daily commute on the 274 bus was replaced by bumpy tuk tuk rides and, later, wobbly bicycle ones. A true London girl born and bred within the sound of the Bow bells – or more accurately the roar of Marylebone traffic – I had never mastered the art of riding a bike, and it was only through necessity, at the ripe old age of thirty-five, and with much laughter from the Buddhist monks who watched me practise, that I achieved this.

Boozy late-night trips to Woody Grill on Camden Road – arguably the best kebabs in NW1 – were substituted with bobor, a kind of rice porridge, or chocolate and banana pancakes from one of the many stalls round the aptly-named Pub St, aka Backpacker Central.

While I missed the green open spaces of Primrose Hill and Regent’s Park, I stumbled across other ways of taking the air, namely alfresco aerobics by the Siem Reap River – often the only barang (foreigner) amongst the silver-haired Cambodian ladies, the men still in their work suits and swathes of excitable children. I even ran a half-marathon around the temples of Angkor, an unforgettable, if not quite torturous, experience.

In the name of journalism I tried out zip-wiring through Angkor Archaeological Park, sustaining a blackened toe in the process, hot air ballooning (and surviving the balloon crashing on a busy road), as well as culinary delights such as scorpion salad and fried tarantula. I learnt to deal with pothole-filled roads, floods where the water comes up to your thigh, and power cuts. But with all this fearlessness I still never managed to conquer my phobia of cockroaches, my unwanted office companions at The Phnom Penh Post. And, as mentioned above, my husband and I bought an English school, attended Cambodian weddings and tried to master the tricky Khmer language.

Eventually though, with a baby on the way it was time for our South East Asian adventure to end, and we returned to Camden. Now, as I wander around my old patch, enjoying the dust-free air and unbroken pavements (or indeed any pavement at all) I reflect on how fast the last three years flew by, and recall the many reservations I had about going in the first place.

Prior to leaving, I, the eternal planner, had no end of concerns about why now wasn’t the “right time”. How could we just up and leave our successful careers, families and friends behind? What if we couldn’t find work? How would I cope without my creature comforts? Wasn’t malaria rife in Cambodia (it isn’t, not in Siem Reap anyway).

It turns out it’s all doable. The careers will still be there when you get back (in some cases, even enhanced – my husband can now put School Principal on his CV, something that never would have happened that fast in London). As clichéd as it sounds, new opportunities really do open up when you move abroad, particularly in South East Asia where development is happening at a rate of knots and business and creative skills are highly prized. Siem Reap is a town where entrepreneurship is rife: bankers can become restaurateurs, graphic designers can become photographers, and TV producers and primary school teachers can even become language school owners.

Friends and family will come and visit. If not, Skype, FaceTime and Whats App will help bridge that gap. And let’s face it there’s nothing more exciting than opening a Christmas package from home, even if it does take five weeks to get there and the Terry’s Chocolate Orange is melted beyond all recognition.

Let’s not forget that shops do exist overseas. And if you can’t get what you want, see above for care packages, or if you’re really organised think ahead and take your must-have item (peppermint tea, in my case) with you. We made the happy discovery that Bangkok, a short forty-five minute flight away, held a wonderland of anglophile treasures such as M&S, Tescos and H&M, where all our western shopping needs could be satisfied.

So all in all, would I recommend a move overseas to the restless Londoner seeking sunnier climes, a change of pace or simply a break from the norm? Absolutely. As John Lennon once warbled, life is what happens to you while you’re busy making other plans. So, it’s new year: what are you waiting for?

6 thoughts on “My life-changing experience swapping Camden for Cambodia”