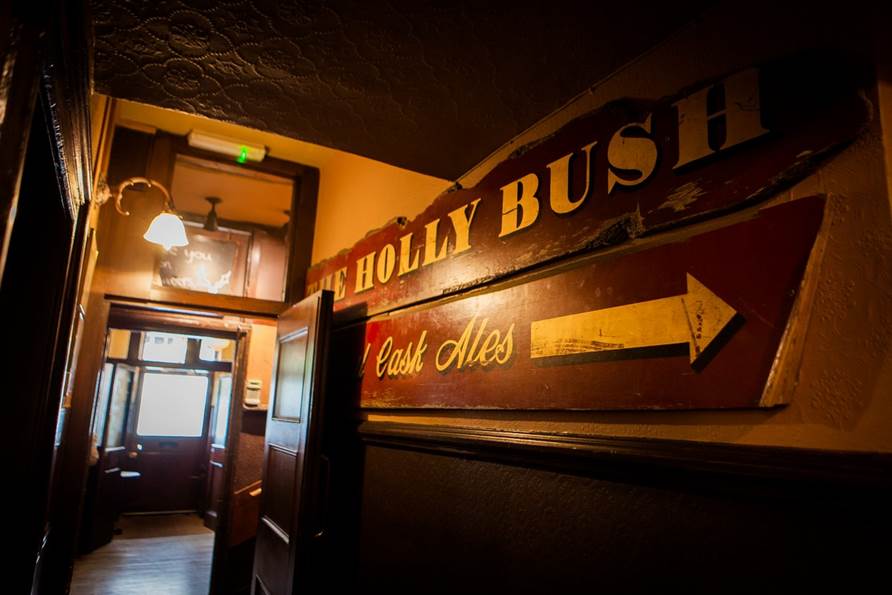 Most north Londoners will venture up to NW3 on an irregular basis. For some, it’s a part of the weekend routine, along with a long walk on the Heath, coffee in a retro caff like the Coffee Cup or tasty roast. For others, it’s a rarer treat: a movie at the Everyman, a play at a pub theatre.

But this week is when the high street really twinkles and the ancient pubs are at their most enticing. It’s sad, of course, that so many excellent old boozers have disappeared – Ye Old White Bear being a particular favourite – but there are still enough watering holes to make for a fun afternoon or evening.

So without further ado begin your exploration at Flask Walk, which handily sidles right up to the tube. This cobbled, car-free passage feels like being on holiday whatever the season, but especially so right now. It has vintage shops, posh boutiques, a fantastic flower outlet, little cafes with outside seating, and best of all, a musty second-hand bookshop with maze-like corridors and thousands of paperbacks you may never have realised you needed. On weekends, a colourful antiques market takes over outside, too (for an NW5 version, head to Queen’s Crescent).

The overall effect is more than a whiff of The Lanes in Brighton – but all just half an hour’s mooch up the hill. Or maybe you’re lucky enough to live even nearer.

Find out more about video ads for your business
Sitting proud on the prettiest corner is The Flask, which was named after the containers used to bottle water from the fresh springs that ran down from Hampstead Heath. Built in 1869, the original public bar and lounge at the front have been preserved, with a hand-painted screen by Belgian artist Jan van Beers depicting classic Victorian subjects, and elegantly separating the two spaces. But best of all in December? Not one but two real fires. Very toasty.

If conditions aren’t too arctic outside, and you’re prepared to wrap up warm – perhaps aided by a hot toddy from the bar – it’s well worth braving the elements to sit at a pavement table with a pint of ale. Here you can soak up the festive atmosphere and watch the passing cast of wealthy emo kids, kooky teenage girls, Japanese tourists, and genteel Hampstead folk go about their present-buying sorties under twinkling lights.

After a couple of jars, head up the hill to the seasonally-named Holly Bush (22 Holly Steps), Hampstead’s most atmospheric boozer, for another. Dating back more than two centuries, the pub is engrained in the area’s history – and feels that way the moment you walk in the door. There are ornate etched glass panels, authentic wooden floors, nostalgia lining the walls, and roaring fires in the main dining room – although be warned, the entire place is often booked up at weekends. Back downhill (a bit) take a tipsy left into New End, where The Duke of Hamilton (Nos 22-25) has been serving locals for over three hundred years, as well as making its way into the Best Beer Guide for two decades. This hostelry has a mighty following, a little like the Pineapple in Kentish Town, and an excellent reputation for real ale. One of the last proper watering holes still standing in Hampstead village, it was also where the late Oliver Reed was seen carousing back in the day.

Fancy something a bit hipper, even in well-heeled old NW3? Stagger into the Horseshoe on Heath Street, which has just reopened with a very minimal interior after a lengthy refit. Never heard of it? Why, it’s the sister (and original) pub of the Camden Town Brewery, so you’re in safe hands. Try a mighty 6.2% India Hell’s lager to warm those cockles – and also see you to The Stag, a 15 minute walk (perhaps past upmarket food pub the Wells on Wells Street) down past Hampstead Heath overground. At this time of year its boisterous summer beer garden gives way to cosy flickering flames and candles in its dark interior. And it does a damn fine negroni should you need something stronger.

Five more to try in NW3

The Roebuck
Right opposite the hospital on Pond Street is this buzzy bar with real fire.
King William IV
Once an essential gay pub, now rather characterless, but still the only surviving pub on the main high street.
Garden Gate
This well-placed boozer (next to the Overground) is candle-lit in winter and always throbbing with visitors.
Freemasons Arms
Beautiful building with bland interior, but right next to East Heath and so handy for an urgent brandy coffee en route, should it be needed.
The Magdala
Boasting an impressive history, this Heath-side haunt opposite the Overground has just been bought by owner of The Stag and reopens in late Jan.