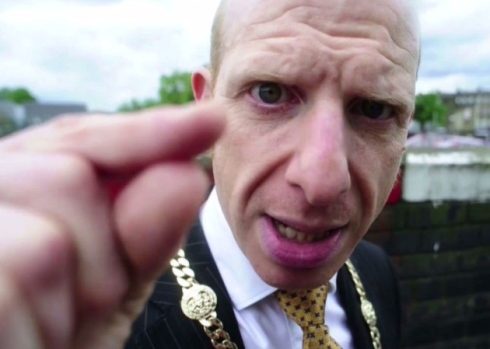 And so we thought it high time we all lighten up a little. With that in mind, check out this sketch from one Graham Loose, the new self-styled Mayor of Kentish Town. The title? How To Keep The Middle Class Out Of Your Area. Ahem.

If you enjoyed that, it may come as no surprise that Loose is the creation of an experienced comedian and actor, Steve Furst. Most famous for starring in the Orange mobile phone cinema adverts, he has also been in TV shows like Little Britain.

So what was the catalyst for the mayor? “I’ve been creating comedy characters like my showbiz alter ego, Lenny Beige, for many years,” he says. “I also had an ‘urban voice’ act, having grown up in north London, before Ali G came along and the idea was shelved.”

Recently reading about the “crack smoking” Mayor of Toronto, Furst dreamt up an urban London mayor “to counterbalance the posh of Boris. He’s ostensibly a local civil servant drunk on power but with a good heart, a few unorthodox policies, and is crazy. The main joy is no wig or make-up, just a suit and chain bought on eBay. And thus Graham Loose was born.”

And the mayor is Kentish Town-based as it’s an area Furst still knows very well. “I used to go to gigs there from the early 80s, and now my kids go to school in the postcode. It’s still rough round the edges. Kentish Town, for Graham Loose, keeps it real.”

Already, online channel Comedy Central are impressed, having commissioned five chucklesome shorts, all of which are worth a gander below. More are to follow.

This is box title
To watch the other four sketches, head to the Comedy Central here.

Should the Mayor have his own TV show? Add your thoughts below…