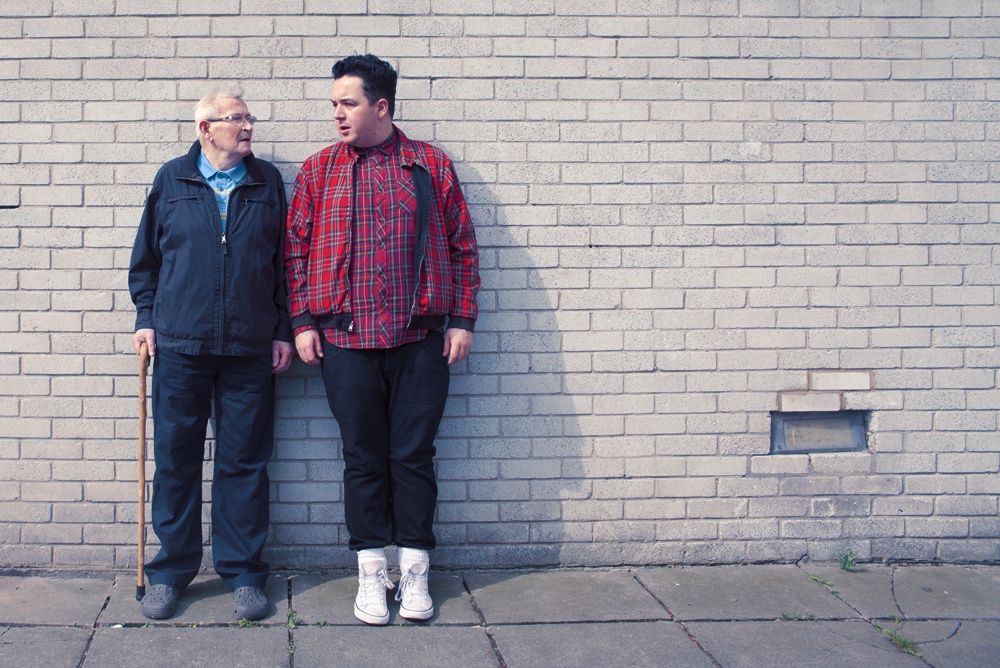 I am the first grandchild of my family, and was brought up by my Irish grandparents on the Ludham council estate in Gospel Oak. As a child I spent hours listening to Grandad’s jokes, reading his post and holding his hand on long walks across Hampstead Heath.

Grandad is now 77 years old and I continue to listen to the same jokes, read his post and hold his hand on short walks to the chemist to collect his weekly dose of 122 tablets.

One thing I’ve noticed is how the public pretend my grandad is invisible. People push past him on the bus and he is ignored when he tries to strike up conversation. Our society is obsessed with youth.

The art world has a similar penchant for new, young things and is built on cliques and clichés. With this in mind I began to wonder if I could get people to notice older people and attempt to turn an unlikely candidate into a successful artist. And Liam Gallagher is my Grandad was born!

Liam Gallagher has been many things in his time: a farmer, a miner, a labourer and a gardener – but never an artist. His mother died giving birth to him meaning he was sold to the nearest farm and starved. He ran away from home and came to the UK in 1951 with no money, he was greeted with signs that read “No Blacks, No Irish, No Dogs”.

I want to give my grandad a voice, enabling him with the skills to make biographical performance and art whilst questioning the idea of who or what an artist is or can be. In short, I want Grandad to be the next Tracey Emin.

The project however won’t be plain sailing. Grandad is unable to read or write, leave his council house for very long, nor does he care who Charles Saatchi is. The art world will need to adapt to working with an older person – not the other way around.

Liam Gallagher thinks this project is a good idea, he thinks it’ll be fun to “act the goat” whilst spending time with his first born grandchild. When asked what he thought an artist was, my grandad responded “an arsehole” – evidently the apple doesn’t fall far from the tree. Liam would like to stress that some of the money will have to be spent on lemonade. M&S Lemonade is his favourite.

To do all this we are going to need equipment, materials and the help of professional artists to facilate my grandad’s new practice. We will invite noted artists to collaborate with him and give him skills, pay for studio time, the production of his work, the creation of an artist’s website and an online presence.

I need to raise a minimum of £5,800 to fund the creation of a sound tour in 2015 in the UK, Ireland and USA but I hope it won’t stop there. I’d love to do more – a concept album, a gallery show, photographic and video works, installation – the works. The more money we can raise the more work Grandad will be able to make. Watch this film of us chatting in Gospel Oak:

This is box title
Can Scottee really turn his Grandad into an internationally renowned artist? Will the public dig deep enough to make this happen? Is the art world ready to accept a 77 year old novice? You can help him out by heading here.