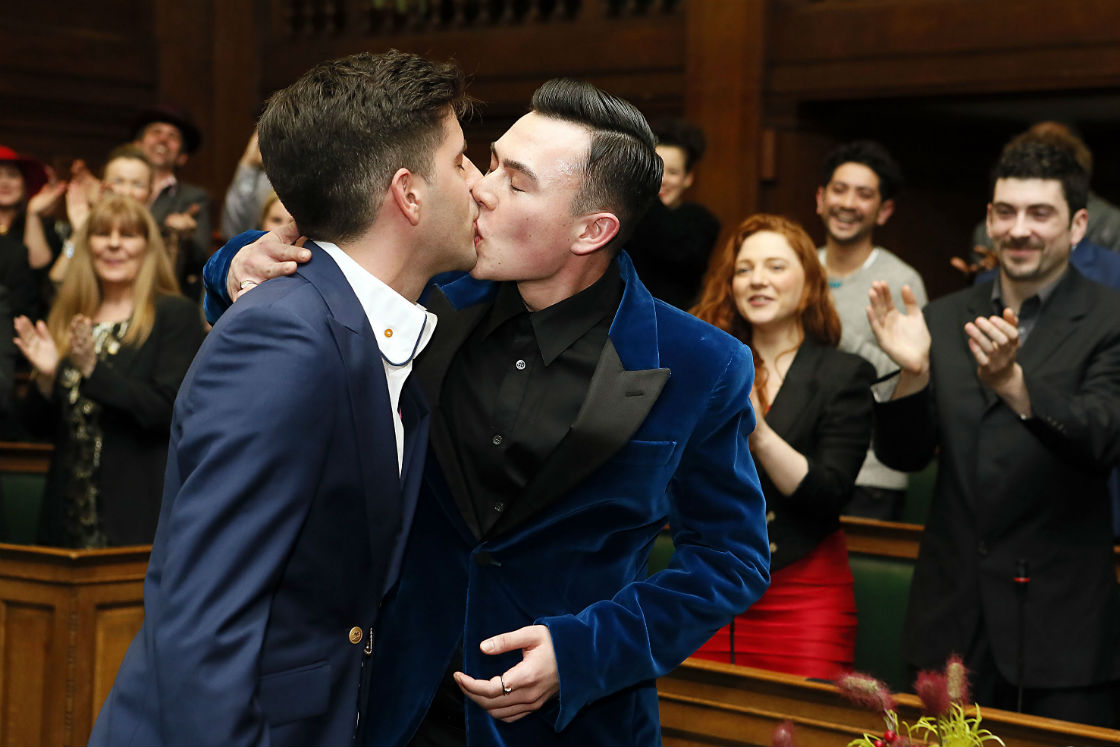 We did it! Local boys Sean and Sinclair celebrate being the UK’s first same-sex marriage

History was made at the weekend. But did you know they were a couple from Kentish Town?

Nice that Kentish Town-based couple Sinclair Treadway, 20, and Sean Adl-Tabatabai, 32, were the very first in the country to exchange vows at Camden Town Hall (12.01 am, Saturday morning, to put a finer point on it).

Over a hundred guests looked on – no doubt many with a moist eye or two – including Sinclair’s parents who had flown from Los Angeles for the occasion. Meanwhile underrated art-pop collective The Irrepressibles (who we’re big fans of here) performed their song Two Men in Love.

So who are the boys in question? Well, Sean has lived in the borough for ten years and has his own TV production company, having previously worked at MTV on Hawley Crescent. He met his beau, Sinclair, in Los Angeles at the Beverly Hills Hotel last year while on a business trip.

Although Sinclair had never been to London before, since being whisked across the pond he’s “loving living in Kentish Town” – although rumour has it that they ultimately plan on eventually relocating to America. “But it’s incredible,” says Sean, “to think that the man I fell in love with last August I’m now going to spend the rest of my life with.”

“It’s all happened so quickly it’s hard to take it in,” adds Sean, “but I’m just so thrilled and amazed that our wedding is so important, not just to us – but to the rest of England and Wales.”

Agreed. And none other than the hirsute Mayor of Camden himself, Jonathan Simpson (whom we interviewed here) conducted the ceremony, alongside one of Camden’s registrars.

An excerpt from the Mayor’s speech

It’s a great pleasure to welcome you here tonight to Camden Town Hall on this hugely important and historic occasion – the first same sex marriage in England and Wales and indeed the marriage of Sean and Sinclair.

Sean and Sinclair have taken the brave step to have the first same-sex marriage in our country – and have significant media interest in what is normally an event to share with family and friends.

It is a genuine honour to be here as Mayor of Camden to share tonight with you all and take part in the proceedings. I am the first openly gay Mayor our Borough has had – something that I personally am very proud of. Camden has a long and proud history in campaigning on human rights – with Ghandi studying here and indeed the international anti-Apartheid movement basing itself locally for decades. This history is what makes Camden the most culturally diverse and socially cohesive parts of London.

On reflecting upon tonight, it’s astonishing to think how far LGBT rights have moved in this country. Just 47 years ago, homosexual relationships in the UK could end in imprisonment or a life of psychiatric care. This was a reality – with many such as Alan Turing choosing to sadly take their lives rather than live in fear of persecution.

Since then we have slowly but surely seen a change in laws and attitudes around LGBT rights. We’ve had some major hurdles, such as Section 28, and some victories like the adoption of civil partnerships. We’ve seen more people openly come out – from politicians, Olympic athletes, authors and actors all declaring their sexuality proudly. We’ve seen same-sex couples adopt and we’ve seen gay rights largely become an issue that the main political parties agree upon.

Tonight is another huge step in civil rights for our country. But tonight cannot be seen as the final step. We cannot leave this wonderful celebration and think that our job is done. Throughout the UK many young LGBT teenagers face daily bullying and harassment. Gay love remains a criminal offence in 40 of the 53 Commonwealth states – and indeed recently some countries have tried to adopt legislation where LGBT people could face the death penalty for being open. The situation in many countries is gravely serious.

So tonight we celebrate not only the love of a couple and a historic milestone in England and Wales – but I hope that through Sean and Sinclair, and the many other loving couples who will no doubt be following in their footsteps well into the future, Camden and other parts of the UK will act as a beacon of hope, so that we can all live in a more tolerant and loving world.

Read all about another local gay couple, Ashley and Jack, who married on Saturday, here.