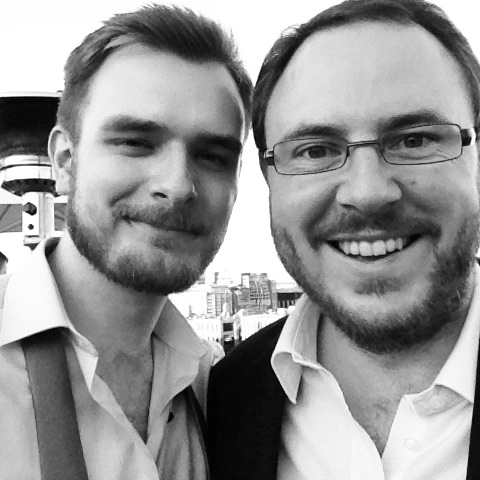 They were the first couple to register their marriage in Camden. Here Ashley talks us through what happened next

When the switchboard opened, I was the very first person in Camden to register. In fact, I kept phoning and phoning all morning until I got through.

As we were the first, we had the option of getting married at midnight, but preferred a daytime wedding. A little more sociable for our guests, shall we say.

I’m 25 and my partner Jack is 34. We met through friends about eight years ago, and live in Primrose Hill with our basset hound June. I have my own social enterprise called OpenPathways which provides IT and civil sector development support, while Jack runs Citrus Saturday for UCL, a global charitable activity.

As the older partner, you might think it was Jack who proposed to me; but actually it was the other way round. During a picnic in Regent’s Park on a lovely sunny day one Easter, I popped the question. Jack said “YES!” straight away. But we decided to wait for a full same-sex marriage, rather than a civil partnership, as we knew it would come eventually; and so now are both really looking forward to being one of the first to celebrate this new equality.

Find out more about video ads for your business
When Jack first came to London to study at UCL, he lived in a halls of residence which overlooked the Town Hall steps, and he says he would often see couples getting married there on a Saturday. Being able to do the same this this weekend is a wonderful reflection of how equal rights for gay people in the UK have progressed, and we both look forward to seeing similar advances made overseas.

We originally planned a small wedding, but when we decided to be one of the first couples to tie the knot, we realised it was a bigger celebration than just us, so are now hosting around a hundred guests. Having worked and lived in Camden for so many years, it really feels like home: such a welcoming and accepting borough, there was no question we’d get married anywhere else than the Town Hall.

Why chose the very first day that same-sex marriage becomes legal? Well, it’s purely because I work and volunteer with Camden LGBT Forum. The director Nigel Harris is my best man – and was usher at the very first civil partnership in Camden – so we had spoken about doing it for a while. All the trustees will be present, as well as the Mayor of Camden, Jonathan Simpson, who is going to be master of ceremonies. I’ve been involved in LGBT rights for the last six years and it just felt right to seize the opportunity to celebrate this huge milestone with our friends, family, colleagues and forum members.

And celebration it will be. There’s a “rainbow reception” at the Town Hall, with champagne and cocktails, balloons, banners and a cool photo booth. After that we’re off to the Somers Town Coffee House on Charlton Street for a buffet and Pimm’s; and then we’ve got their new underground cocktail bar all to ourselves till 2am to get thoroughly pickled.

And you know what? We’ll report back with some pics afterwards. Fingers crossed for those rumoured blue skies.

Are you a gay couple getting hitched this year? Tell us about it: info@kentishtowner.co.uk

4 thoughts on “Same-sex weddings: meet Ashley and Jack, tying the knot this Saturday”

4 thoughts on “Same-sex weddings: meet Ashley and Jack, tying the knot this Saturday”