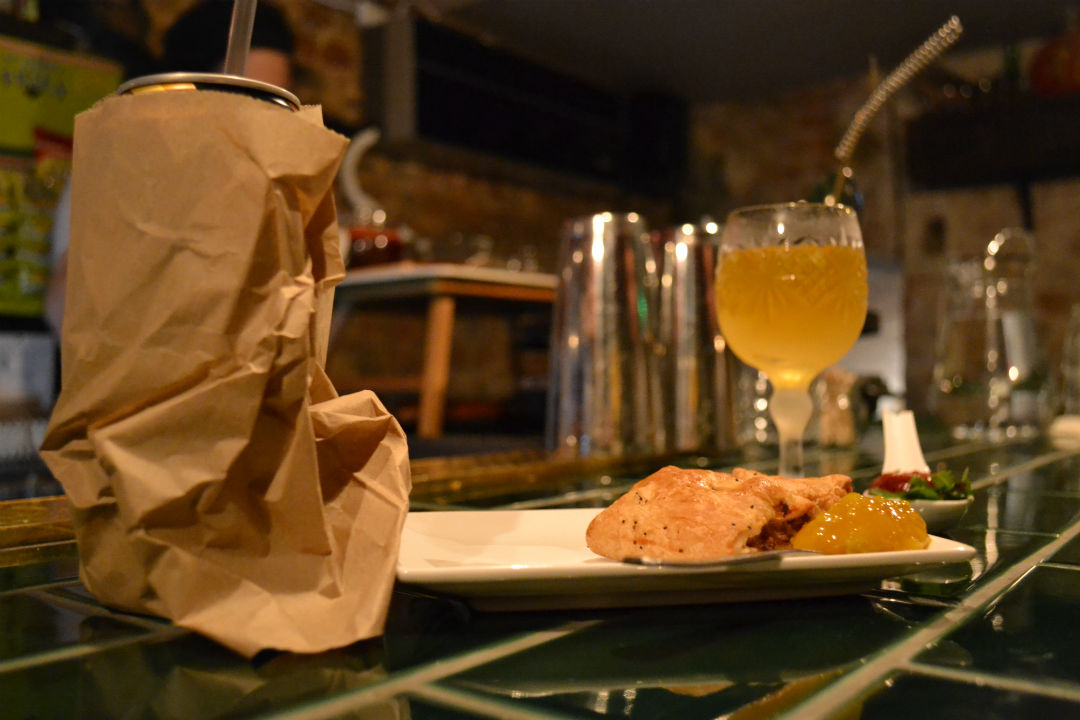 We predict the tiny basement bar is about to be Kentish Town's biggest subterranean hit since Chicken Shop. Just don't all go there at once

The entrance is more art installation than cocktail bar. Slip through a purposefully low-key 1960s-style door next to the Mamma Mia caff on Kentish Town Road. A Chinese laundry-inspired corridor, graffitied by local artist Jeba, is lined with washing hanging from the ceiling.

Downstairs, the candle-lit interior holds instant appeal: restored flagstone floors, a shiny green-tiled bar, a lively assortment of furniture from Victoriana to retro 1950s. And an adorable scruffy-haired Jack Russell, Otto, complete with cravat, rubs his back on the rug or paws new arrivals enthusiastically.

Knowhere Special, which has finally opened its doors, is the vision of a Kentishtowner couple, Ash Clarke and Helen Gay. They have just moved back to the area after living in east London and travelling the world with their jobs, as mixologists and bar consultants.

“We want this place to be an extension of who we are,” says Helen. “It’s not a theme bar. It’s really like our living room. People should be able feel that they can flop in the corner as part of the furniture.”

Helen first found the basement space six years ago, but then accepted a job offer which took her away from Kentish Town. And it was while looking for a “pop-up” bar last summer that she and Ash, who’ve only been together a year, fell in love with it.

The project became all-consuming, and the pair set about transforming the disused cafe store-room over a period of six months, while also rummaging flea markets and antique fairs for the eclectic range of pieces that fill the interior.

It’s a highly atmospheric cluster of rooms. Together with Shebeen next door, the whole subterranean space was once Victorian police cells. They were built in 1862 underneath the cop shop itself (now Kentish Canteen) to house Y Division, conveniently located next to the Assembly House, then a notorious drinking haunt. Now? Well, they make delightfully cosy stone-arched snugs off the main room (see pic, left). Natch.

So what’s the schtick? You can pop by for a beer, of course, or carafe of wine, but the real point is the cocktail list which befits the pair’s experience working in some of London’s edgiest bars. They readily describe in detail the complicated flavour reductions and processes involved – which range from old-fashioned “grandma techniques” to modern-day Heston-style molecular experiments in taste, texture and colour. Ingredients are bought or sourced locally: meat from Meat NW5, coffee from Bean About Town, for example.

Cocktail names might be quirky but don’t let it put you off: I had to try “The Park Bench” (see main pic above), after all the stories I’ve written on the subject. Served in a Strongbow can and paper bag, it’s made by reducing a two litre bottle of cider to just 200mls, its essence added to apple brandy, poire william eau de vie and fizz. The result? Clean-tasting and invigorating. You could describe it as a deconstructed and then reconstructed cider, “but don’t let that put you off,” says Helen, laughing. “It’s not meant to be pretentious. We came up with the idea after a few drinks.” And to underline this, it’s served with a home-made sausage roll and some piccalilli.

Next up, served in a china mug, is the snappily-titled “Look, There’s Something Punchy Over There…” One to share (reflected in its price-tag) it’s packed with layers of flavours that do the samba across the tastebuds: dark rum, cachaca, rhubarb liqueur and pineapple juice. Each cocktail comes with an edible “surprise”: this one includes a quite more-ish caramelised banana, and a naked flame that has to be extinguished imaginatively (we’ll say no more than that). So it’s perhaps a good talking point for a date – rather than one to share with your co-editor, as I did. Cosy.

Best of all, however? We liked the simplicity of the “Grow Your Own Martini”. Served in a charity shop chic vessel and exuding a dirty martini vibe, it fuses pink peppercorn vodka, cucumber and vermouth, with a dash of “house syrup” (they create this themselves too, of course). Crisp and not too sweet, it suited our negroni-loving tastebuds down to a tee. Unusually, it’s served with a teaspoon of beetroot “yolk” which explodes on the tongue. But again, we won’t say more than that. It really is one to experience yourself.

If this all sounds a little bit “out there”, don’t panic, you can order regular cocktails too; but it’s well worth trying one of their inventions. They’ve worked hard at it. And the ambition shows in its own relaxed way; this is one hell of an intriguing new addition to what we might soon be calling cocktail quarter.