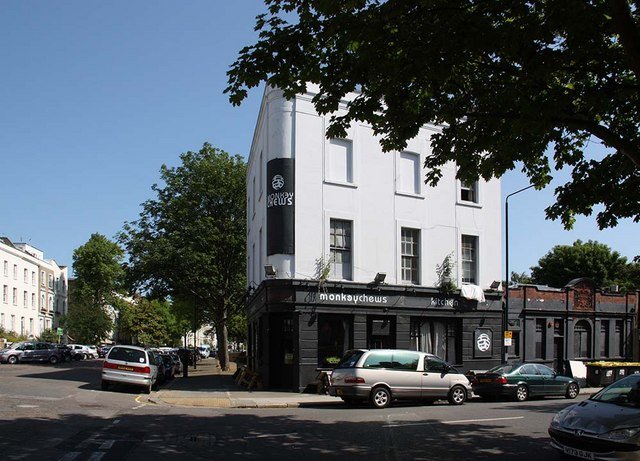 If you’re over the age of – oooh – 21 you’ll remember the infamous Queen’s Crescent dive bar (slogan “seek and ye shall find”) that would, of course, be so at home in the current Kentish Town West scene. But alas, it was a tad ahead of if its time – while being so perfectly noughties too – and shut in early 2011 to become blandly-named apartment block Cloverleaf House. But let’s remember the plush velvet booths, old cinema seats, tatty sofas, quaffable cocktails, grumpy bar staff – and, randomly, oysters from Billingsgate in the slightly eerie back dining room. Presiding over the joint was owner Nicole, who’d talk to you when she was in a good mood, and pretend she didn’t recognise you if she wasn’t. While the party continued nightly downstairs, in the crumbling top room, live music and acoustic nights packed the kidz in.

This teeny-tiny glass-fronted bar opened back in the once-isolated lower reaches of Kentish Town Road in around 2004 (opposite what is now, of course, the smash hit Arancini Brothers). There were decent libations – probably then fashionable things like Cosmos and Sea Breezes – and occasionally a lively room of curious Kentishtowners. The bartender-owner was a friendly bloke from Surrey called Elliot, and more daring punters were encouraged to frolic on a random double bed downstairs. How deliciously noughties! As for now? It’s a site occupied by new sushi joint Aisuru.

Nowadays it’s most definitely a shadow of its former hedonistic self, but this Chalk Farm Road joint was the sybaritic after hours place a decade ago. Genuinely wild, by midnight the back room was crammed with a brilliantly up-for-it mix of ages and types (a young Amy Winehouse frequently held court around one of its candle-lit tables). And by 5am, punters would be dancing on any available surface, entertained by a rotating coterie of rockabilly musicians. The party ended in 2011 when Marathon lost a High Court appeal to sell booze beyond midnight at weekends.

An early sign of gentrification on the corner of Royal College Street and Camden Road, the Mac Bar (now weary chain Grand Union) was a pioneering DJ Bar-cum-gallery so beloved of the mid/late 90s. Occupying a former Irish boozer, it was all the more fashionable tucked away from a Britpop-obsessed central Camden Town. And this was long before the Overground – then the crumby, broken-down Silverlink – gave areas any kind of cred.

Despite popular lore that “this site has always failed”, the corner now occupied by buzzy Pizza East and its subterranean sibling Chicken Shop also did very well during its lengthy reign as The Highgate. When Highgate Studios opened and transformed a drab cluster of former carpet, clothing and wallpaper warehouses into a vibrant media hub, the street-facing units seemed ideal for an on-site bar. Food was of the decent gastro-pub vogue, and when enjoyed downstairs, made for a proper posh dining experience; while upstairs boasted rich carpets, ironic lampshade and quiet corners for clandestine office trysts.

Which dens of iniquity do you remember with fondness?