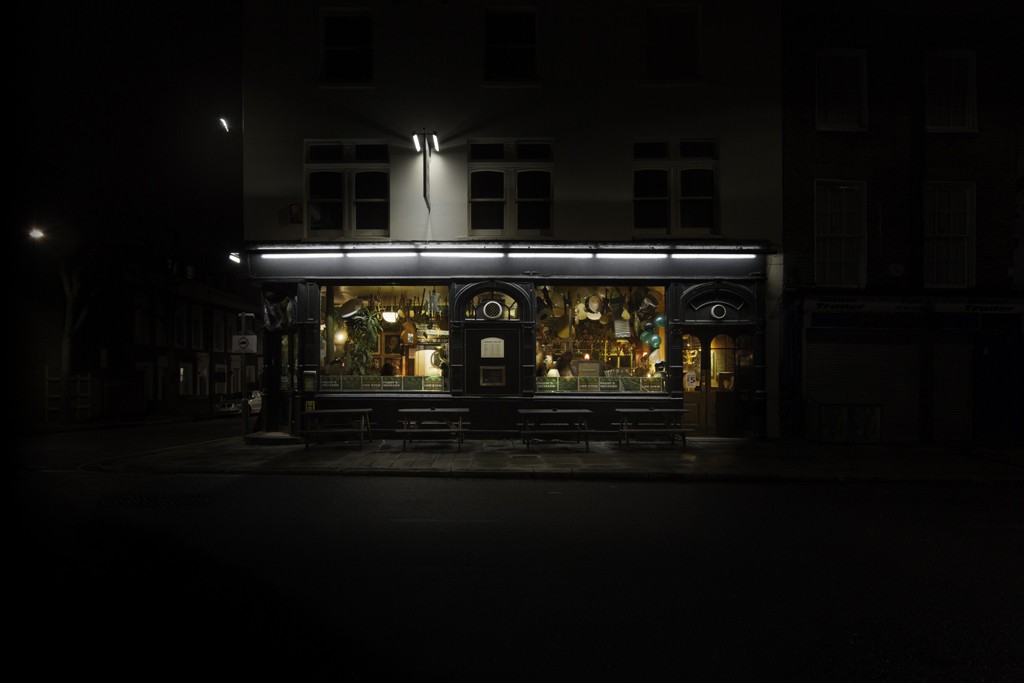 This one, we like. A must-hop south of the river this weekend is to check out an exhibition in a Bermondsey gallery that celebrates seven of K-Town’s iconic boozers.

Meditation on an Ending is the intriguing name given to the show, on until October 5, at Cecilia Brunson Project space: look closely and you’ll see local faves the Southampton Arms, O’Reilly’s, Assembly House, Old Eagle, the Grafton, Lord Southampton and Sir Robert Peel. And they appear…well, spooky.

So what’s the story? Well, on Sunday evenings, at closing time during the particularly icy winter, the Kentish Town-based Chilean artist Nicolas Sanchez conducted nocturnal “peregrinatory walks” alone through the streets of London.

Inevitably, during these wanderings Sanchez would pass by the lights of pubs calling “time, please”.

“So then I started reading stories exploring the famous and infamous visitors of each pub,” he says. “Artists, intellectuals, writers, poets, but mainly crawling around the pubs at night with my camera.

“And these images appeared. Pubs like ships in the night. A mid-distance front take, showing the shadowy exterior, empty streets, abandoned bikes, useless phone cabins, mailboxes, everything lit by a few lamps. And then the bright
interior that invites us to look in on what’s happening inside. A bunch of people hanging onto the remnants of that damned hour when pubs are almost closing.”

So why the pubs’ anonymity? “It extends the metaphorical portrait to that of any local pub,” he says, and is made possible by the digital deletion of names and signage; and by “the blurry silhouettes from long and multiple photographic exposures”.

These moments during the “graveyard hour” of the slowest night of the drinking week provide Sanchez with an urban study within his recurrent theme of landscapes as performance. Between Walter Benjamin’s Flâneur and Edward Hopper’s Nighthawks, he situates himself as “both observer and subject within the work — a single pensive figure in the lonely sea of Sunday night drinkers”.

This is Nicolas Sanchez’ first UK solo exhibition. Sanchez won the Juan Downey award for video creation in 2009 and has been exhibited in national and international institutions including the MAC Museum of Contemporary Art Chile, Borges Cultural Centre, Argentina, BAC Festival Barcelona, Spain.

Need a guide while you’re down there? Check out our sister title Below The River.