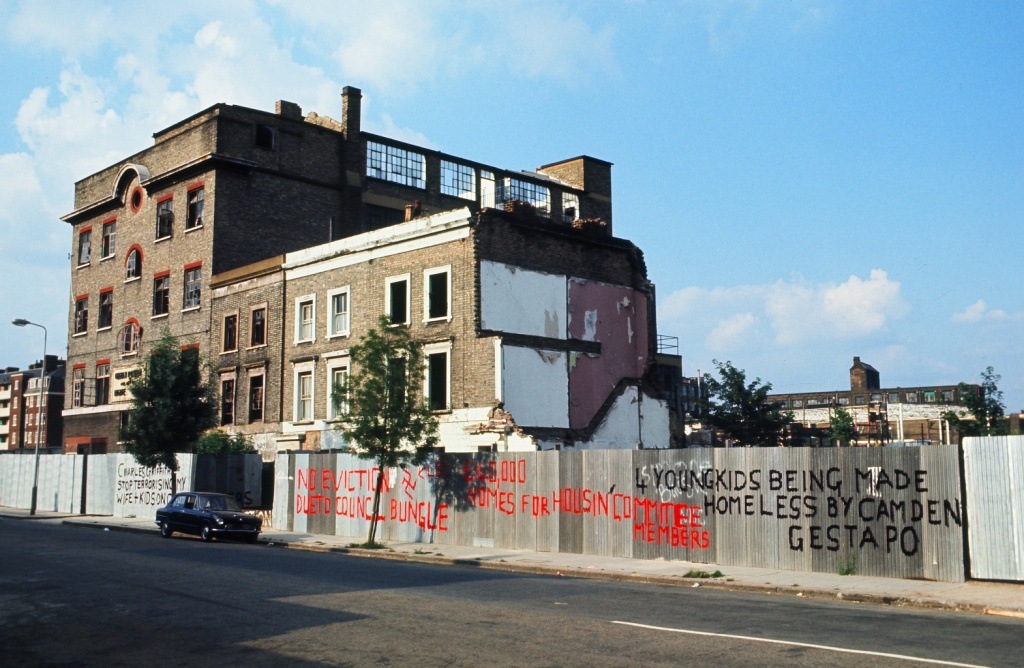 Such a concentration of young people living “on the edge” ensured Kentish Town was a hotbed of creativity. Tom Kihl reports

“I took these pictures without the knowledge that this place – any place – is continually shifting,” says Jeremy Ross, the photographer behind these images that capture the changing face of KentishTown in the mid-70s.

“I thought things were permanent,” he admits of his 30-something self. “Shooting photos of the destruction and construction in this area was, I suppose, my early education into how the forces of a city really work.”

Jeremy was a member of the sizable community of squatters who lived in abandoned houses around modern day TalacreGardens. He stayed for four years on Prince of Wales Crescent, a sweep of houses and little shops that once ran from opposite Talacre to Ferdinand Street, (replaced today with the otherwise inoffensive low rise warren of Mutton Place).

The fashionably liberal council permitted the squatting, while willingly leaving the housing stock in the Crescent to rot. Its eventual destruction caused such outcry it made the national press. Jeremy’s images poignantly freeze time, showing the days before the wrecking balls went to work, and also the rise of the neighbourhood as we see it today.

“We weren’t particularly political or morally self-conscious about squatting, it was just what you did in London when you had no money,” he says. Yet such a concentration of young people living “on the edge” ensured KentishTown was a hotbed of creativity, particularly with the countercultural hub of the Roundhouse just down the road.

Prince of Wales Crescent’s large ex-dairy played home to the London Film Makers Coop (LFMC), part of the avant garde Arts Lab that exists today as the glossy LUX on Hoxton Square. The seeds of successful alternative businesses – such as Crazy Jacks Organic nuts, seeds and dried fruit, now a familiar sight in supermarkets – were sown here too. And future artists, radicals and music stars, including Boy George and Marilyn, made it their early base. But although it was dirt cheap city living, this was no urban hippy idyll.

There was violence in Marsden Street when residents took it into their own hands to oust the squatters there. And George and Marilyn had to flee to the squats of Fitzrovia when a neighbour tried to break down their front door with an axe, having realised that the attractive girl he’d got the hots for was in fact not all she seemed.

As the houses came down and communities were evicted, the local atmosphere was heavy and confrontational. Vitriolic graffiti reveals just how unpopular the council’s redevelopment vision was. Those responsible for pulling down these majestic crescents and terraces honestly believed they were doing something positive though. And who knows, the area’s much envied successful social mix may well have turned out differently had these places stood today, with their inevitable £1.5m price tags.

But looking at shots of the lost Crescent, it’s hard not to mourn these planning decisions, among the final casualties of post-war attitudes; all “progress” rather than preservation.

Sipping a latte at The Fields Beneath, or a beer at Camden Town Brewery today, you’d be forgiven for missing just how down at heel this part of London was less than a generation ago. These pictures reveal a world much changed but still, almost shockingly, recognisable as our own.

See more of Jeremy’s pictures of local life in the 70s as we investigate the history of Kentish Town West station, from being boarded up and burned out, to today’s shiny stop on the London Overground Network.