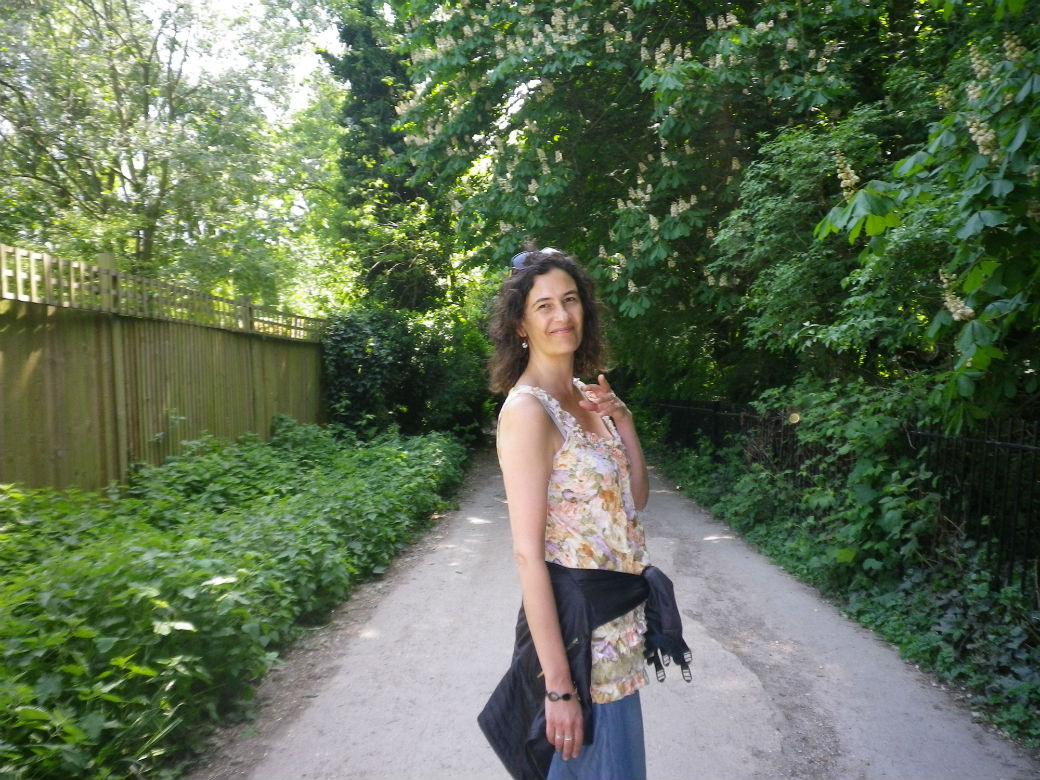 Caitlin Davies was born and bred in Kentish Town, although she now lives in Holloway. A writer, journalist and teacher, she’s the author of five novels and three non-fiction books. Her latest two are Camden Lock and the Market, a social history of the world famous market, out this week, and Family Likeness, a novel inspired in part by Dido Elizabeth Belle who lived at Kenwood in the 1790s, to be published in July.

When were you happiest?
Squeezing into a shop that used to be at the Kentish Town end of Fortess Road: the air was thick with incense and the jewellery hanging from the ceiling got tangled in my hair. Also, buying sweet Greek cakes at school lunchtime from a shop that also no longer exists, and getting my first bike from Chamberlains.

Where would you like to live?
One of those streets where every house is a different colour.

What is your favourite sound or smell?
The clattering rattling sound of the shutters going up in the morning at Parliament Hill Lido.

What is your greatest life achievement?
Getting this far.

What is your most important life lesson?
All things will pass, both bad things and good.

What is your earliest memory?
Cycling down dog poo alley (which is what College Lane was like in the 1970s) on the way to school.

What makes you unhappy?
Prejudice. And not enough sleep.

What simple thing would improve your quality of life?
I’m trying to do it now, regular swimming before doing a mile in the Royal Victoria Dock. I got a wetsuit for my birthday, because you have to wear one. It took me 35 minutes to get it on, then I realised the zip was supposed to be at the back.

What is your most unappealing habit?
Not being able to stay in one place for more than about 40 minutes.

What is your guilty pleasure?
I don’t feel guilty about any pleasures. Except maybe buying yet more Christmas decorations from Poundstretcher, and eating too many chicken livers at Nandos.

What’s your best experience in NW5? Worst?
Falling on the ice in Kentish Town Road on the way to school, spraining my arm and not being able to do a French exam but still passing, that was pretty good. The worst recent experience was my dog Jojo Pink getting attacked on the heath. The man said it was my fault because “my dog doesn’t like dogs on leads.” Then he hit his dog over the head with a walking stick.

Where do you hang out?
Alone at home, if I’m lucky enough. Otherwise on the heath, swimming at the lido or the ponds, or walking up near the old dairy at Kenwood where Dido Elizabeth Belle used to work.

What do you most dislike about your appearance?
I’ve been told I don’t appear friendly at first, which is a bit of a shame as I think I am! My daughter says my eyebrows are a mess, but then I don’t like her wearing make-up, so we’re quits.

What has your career taught you?
To just keep on going. Writing is a strange life, do it because you love it not because of what other people say or think. As a journalist I’ve learnt to never take anyone – or what they say – at face value. Having twice been arrested (in Botswana) made me even more careful to check ‘facts’ and hidden agendas.

What is your favourite dish and why?
I’ve got a very savoury tooth, so it has to be Marmite on toast, which you can eat at any time.

What was your best gig?
I won’t forget seeing X-Ray Spex at the Roundhouse, it must have been around 1978 and I was 14. Poly Styrene got up on stage and hissed, “some people think little girls should be seen and not heard…” then she belted out “Oh Bondage Up Yours!” I’d never seen a woman performing on stage like that; I was more used to Pan’s People.

Describe yourself as an animal?
I’m not very cuddly, so it might be a hedgehog. But I probably walk more like a penguin.

What’s the worst thing anyone’s said to you?
As a writer there’s been a few. For example, “Your book would be more commercial if the main character was white”, and an American editor once said, “I read a bunch of your novel and didn’t get it. I passed it to my colleague and she didn’t get it either”.

Tell us a secret.
No.

This is box title
Caitlin Davies’ new book, Camden Lock and the Market, is out this week. Read more about the history of the market, as well as a review of her book tomorrow