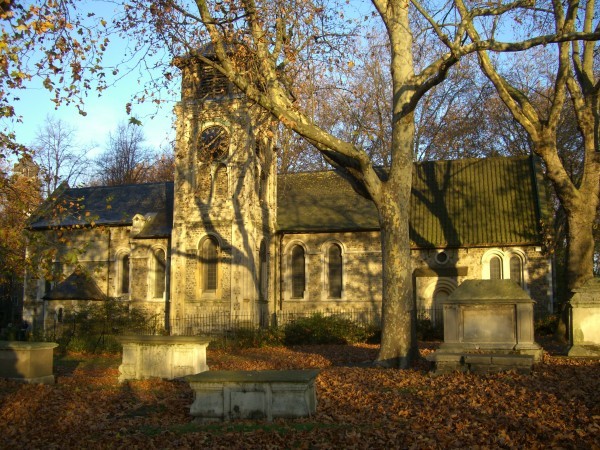 In 1968, no-one was more famous than The Beatles. This brought its own problems, as Justin Beiber would tell you today. The worst thing was the near-impossibility of escaping the public gaze, and just having some time walking around, like any normal person.

The closest the Fab Four managed this was the ‘Mad Day Out’ in November 1968, when they travelled around London, finding interesting and quiet spots to take some photographs for their new album. Hardly normal, but perhaps the closest that they could get to it.

One of the early stops was the park and churchyard of St Pancras Old Church, just behind St Pancras Station. Here they posed in front of the church porch, the overgrown hollyhocks and the tall Victorian monument built in memory of the French émigrés from the French Revolution.

The Beatles, of course, aren’t the only ones to find a moment of peace here. There is evidence of Christian worship on this site, perhaps attracted to the springs that used to well up here, since Roman times, and it has been used ever since. The church building has been rebuilt several times, but for centuries people have found the site a spot of quiet reflection, discovery and community.

Mary Shelley, the author of Frankenstein, used to rendezvous with Shelley next to her mother’s tomb to plan their elopement, Dickens recalls wandering through the churchyard, and Blake placed the site on his mystical map of London. Unusually for today, the church remains open daily, and there is a constant footstep of visitors finding a moment of calm within its walls, no matter what their religious persuasion: over 100 candles are lit every day.

Every Sunday and Tuesday, church services following the somewhat dramatic High Church tradition that dates to the Victorian population boom in Camden and Kentish Town, bring song, community and prayer; a thing of beauty even to the most rational being as sunlight streams through the south nave windows through the incense-scented air. Coffee, cakes, and sometimes something more bubbly, bring more earthly comforts.

The church, with its intimate acoustics, also makes a fine venue for music, and is host to regular folk and other musical concerts, adding to the vibrancy of north London. Chatting with north Londoners, you will also find happy memories of a wedding or a baptism that took place here.

The church is also used to hard times. The roof has caught fire, the tower fallen down, and the area has had a reputation for all kinds of insalubrious activities, from grave robbing to highway robbery. Perhaps the most shocking intervention has been the arrival of the railway lines in the nineteenth century. At this point, the churchyard was stuffed to overflowing (literally, according to some accounts), and had to be cleared for the new train tracks linking London to the midlands.

Once the bodies were moved to St Pancras cemetery, Finchley (or in the case of Mary Wollstonecraft and William Godwin, Bournemouth) an architect oversaw the rearrangement of the tombs and gravestones. His assistant, the would-be writer, Thomas Hardy, helped to construct what is now known as the ‘Hardy Tree’, a dense ring of gravestones sheltering under the bowers of a now fully-grown ash tree.

Sir John Soane, whose house in Lincoln’s Inns Fields is suitably eclectic, also has his tomb here, its shape an inspiration for the design of the British red telephone box. Inside the church are many fine memorials to those who have lived in the area, including Elizabeth I’s cook, Daniel Clarke, who inspired the Albany Street pub, the Queen’s Head and Artichoke.

And now, the task is to shore up the unstable ground on which the church is built. The waters which brought the church to the site, and the centuries of digging, have provided an unsatisfactory base for the tower. A new drain needs to be dug, and the church stabilised, if the large cracks that can be seen growing like dark cobwebs across the inside of the church won’t claim St Pancras once again.

A quarter of a million pounds have to be raised to secure the building’s future. But it is also an opportunity, a chance to work with the community. And to start this, a series of lectures by eminent historians and archaeologists of London, including Kentish Town’s own first lady, Gillian Tindall, will take place throughout the year.

Come and hear more about the curious history of this ancient London spot, enjoy a glass of wine, and even buy a tea-towel. Most importantly, help save a place that really matters.

This is box title
The next lecture is this Friday May 17 at 7 p.m, when Philip Davies will be speaking about Lost London. More information here.

Words and gate pics: Matt Shaw
All others: Stephen Emms