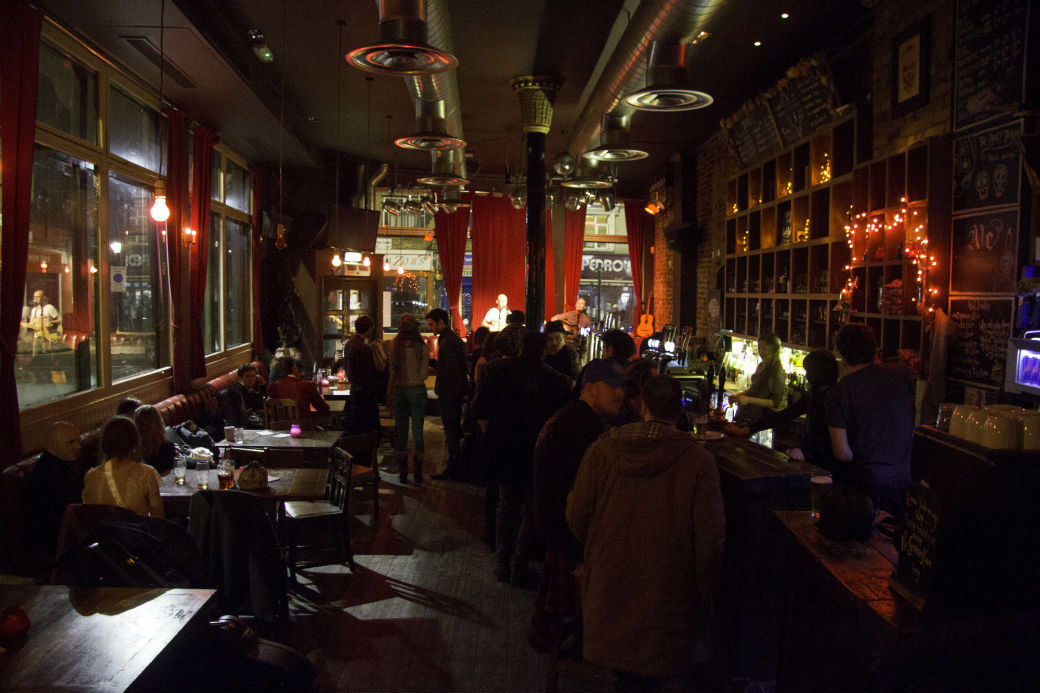 “There was a guy staring so intently at his drum I genuinely thought we were about to witness some form of instrument-related homicide.”

Would you perform on a music open mic night? Stand in front of a perhaps hostile audience and be judged? Are local open mic nights, in fact, reflective of the wealth of talented and creative folk that call NW5 home? I wanted to explore the offerings put forth by two of Kentish Town’s finest hostelries, The Oxford and Abbey Tavern. It was time to grab a Hell’s (or three) and find out.

Every Wednesday, The Oxford opens its elegant upstairs room to those seeking to demonstrate their musical prowess, its ad-hoc range of performers underlining what makes open mic nights so appealing. Take the beery bloke slurring and breaking into a bizarre rap over his guitar. Or Emily, celebrating her 23rd Birthday clad in a fresh pair of DM’s with a nervous shake to her voice, supported by a horde of mates who sweetly helped her find her stride.

Then there was Steve, a local busker – all long ponytail and waistcoat, like Camden circa 1987 – who, despite dropping his notepad, forgetting the lyrics and battling with a blown fuse, still delivered the goods with a poignant song about the murder of a Liverpool fan. In fact, throughout, the evening’s lovely democratic nature shone; but nonetheless, let’s put to one side a) the enthusiastic saxophonist and b) a guy staring so intently at his drum I genuinely thought we were about to witness some form of instrument-related homicide.

And so to The Abbey, whose shenanigans take place slap bang in the middle of the main bar, as diners munch on Farmer Tom’s acclaimed steaks and burgers. Acts have to fight harder compared to the more attentive audience at The Oxford, either a blessing or a curse depending on your mood. But on the night we visited, 20 year old singer-songwriter George Morgan triumphantly won over the crowd with his raspy acoustic set, reducing the chatter to pin-drop silence: the power of a dishy bloke, a couple of singalong ditties and a guitar, eh?

Also impressive was unconventional Kosmic Troubadour, bespectacled in his heart-shaped sunnies, who crooned out alt-electro luurve songs on a rainbow-painted keyboard. In fact, The Abbey appears more popular with edgier performers generally, its atmosphere warmer and perhaps more ‘fun’ than the resolute stoicism of The Oxford. It’s worth adding, however, that the latter is worth attending for the jam sessions at the end, where organizer Val’s talent for getting musicians together ignites a new energy to the room.

Improvised or slick, amateur or professional, good or basically goddamn shite, at both venues the acts are always entertaining, and provide plenty of fuel for a school night out with the bezzies. But no, I’m not now tempted to take to the stage myself.

No matter how much cash you’re offering.

This is box title
Find The Abbey here on our Nearby Map, and The Oxford here.