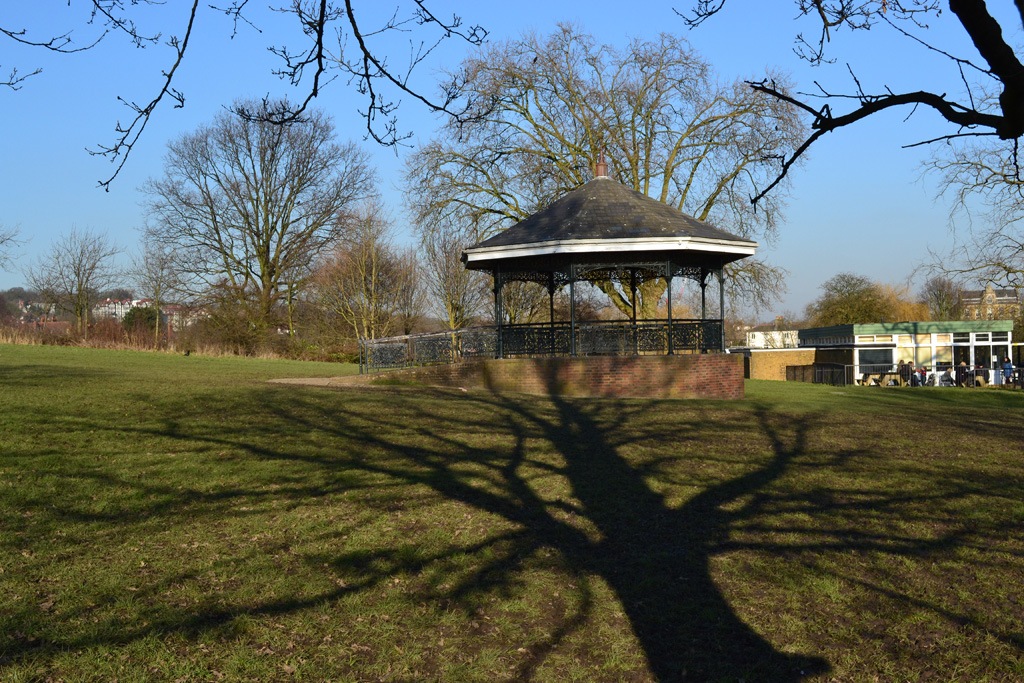 Stories about the Hampstead Heath landmark go back decades. Let's take a look

Parliament Hill Bandstand looks a pretty picture on a sunny day, doesn’t it? The embodiment of a whole host of Victorian values, from scenic perambulations to civilised music for public pleasure, in a setting enriched with ornate cast iron flourishes.

But this is not the case. The bandstand you see was built in the 1990s, and the one it replaced was rather the embodiment of such 1970s values as declining municipal services, glue sniffing, graffiti and vandalism.

To indulge those dormant bandstand heyday fantasies, we need to turn our attention across to the other side of Kite Hill. There, in the early 1900s, on the banks of Highgate Ponds, stood just such a structure.

The original Hampstead Heath bandstand, on which the appearance of today’s successful modern one is obviously based, was the subject of many attractive posters and black and white snapshots. These reveal the spot to be quite the tourist attraction. A place to see and be seen, perhaps with a parasol in hand or maybe some extravagantly plumaged hat upon one’s head.

There is no particular record we can find of when this original, and the sizeable circular seating area around it, were landscaped clean off the face of Parliament Hill Fields, but a post-war carbuncle was certainly in operation in the current location from the 50s.

In the late 60s, Camden Council organised a series of free concerts at the bandstand. These began with a rainy Wednesday in September ’68, when Jefferson Airplane and Fairport Convention played to only a few hundred tuned-in people. According to the Rock Prosopography 101 blog, “a pocket of post-lemonhead mods/proto-skinheads made their feelings known about the ‘dirty hippies’ and ‘freaks’. Fortunately the rain drove them back to the Bull & Last.”

The following summer, the Council developed their free Camden Festival concept further by throwing a series of three weekly parties throughout May that kicked off with Pink Floyd’s very own bandstand gig. In a scene a world away from stadium-filling lightshows and giant inflatable pigs, the band were squeezed into the corrugated iron shed, battling with feedback from the dodgy PA.

The next week, the crowd of hippies and groovy kids had more than doubled, probably helped by John Peel mentioning the events on his radio shows, and by week three when Fleetwood Mac played, 25,000 turned up.
Unfortunately the skinheads emerged from the confines of their favoured Bull & Last once more to hector and pelt the crowd with coins and bottles. Fleetwood Mac had only played a couple of songs before being forced off stage in the ensuing melee.

It’s more than a touch amusing to imagine the fuss even the thought of a 25k-strong rock gig would cause in the same leafy location today, particularly in light of the fact that Fleetwood Mac took to the bandstand just after midnight. Midnight!

In fact back in 2006, Booker Prize-winning local author Alan Hollinghurst fought a long (and ultimately fruitless) battle to have a programme of Sunday afternoon brass, jazz and Japanese music events at the bandstand blocked on the grounds of the “intolerable noise nuisance.” He’d have been apoplectic in the summer of ’69.

These days the bandstand is an obvious focal point for all manner of Heath events, musical or otherwise. And it’s still, of course, a favoured skulking spot for school kids during the week.