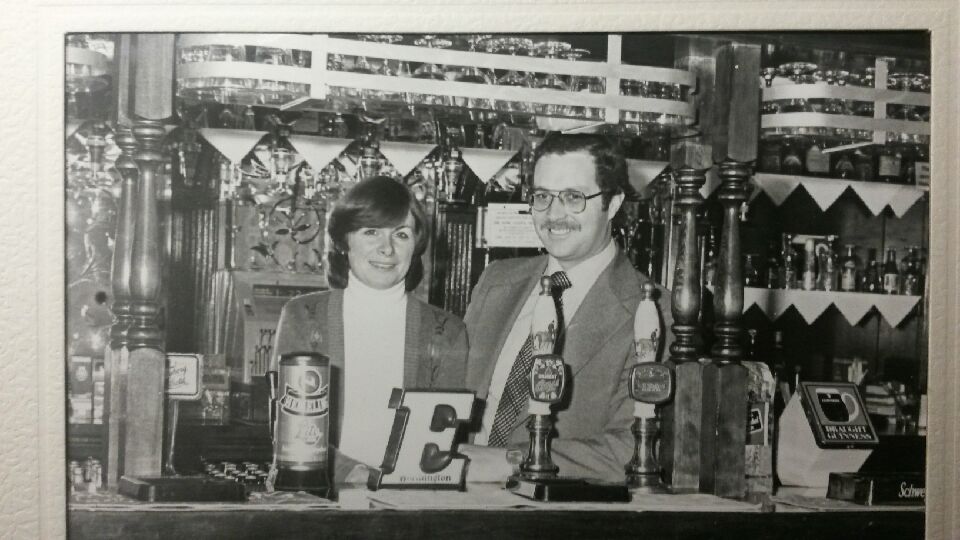 I grew up above the Bull & Gate

1979. Margaret Thatcher came to power, the average UK house price was £13,650, the Sony Walkman was on top of every kid’s Christmas list…and the Lynskey family moved into the Bull & Gate. And look: that’s my mum and dad, Margaret and Pat, above, on the day they got the keys.

Irish immigrants, they were determined to work hard and build a successful business that would provide for their three children (me, aged 7, Barry aged 5, and Marion aged 4) in a way, that unfortunately, Ireland couldn’t at that time. The plan was to eventually return home once the economy picked up.

Fast forward 34 years later, two more kids (Christine and Elaine) and five grandchildren – and in May 2013 Pat and Margaret had pulled their last pint. That move back to Ireland never quite happened, but a successful business was certainly built, loved and enjoyed by thousands. It made us all very proud and emotional to be a part of it.

At the heart of the old Bull & Gate and what it will always be remembered for is of course the music. A major player on the indie scene in the 1980s, every unsigned band wanted to be seen and heard there as it was the best place to be spotted.

But before the Bull & Gate, my parents were managing a pub called The Pegasus on Green Lanes, now a Turkish Social Club. It was a rough crowd, with huge fights every weekend, and it got to the point where they both dreaded the weekend.

So we all moved to NW5. My room was over the music venue, which was pretty much the same as having the bands play live in my bedroom, but we always slept through it all. In fact, I can sleep through anything now.
There were also water fights on the balcony with my brother and sisters growing up. Many a furious soaking wet passer-by would shout at the barman for what had come flying over onto the pavement.

But my earliest memory? The mad rush downstairs to the bar on Saturday and Sunday mornings, before the cleaner arrived, when we would run around picking up money that people had dropped the night before.


By the age of 14 I realised from my schoolmates’ reactions that living in a pub was quite a cool thing – especially when I could sneak bottles of R Whites and packets of crisps to class. These spoils obviously progressed onto lock-ins and parties as the years rolled on, and we had some brilliant nights in the pub, with DJs in the back room, all packed to the rafters. They were so legendary that my friends, sisters and brother still often talk about them.

Smuggling pals in at 3am after a night out and sneaking them back out at 8am before the folks woke up – oh yes, we were very naughty! And I was caught eventually, and punished accordingly.

We started working behind the bar young, from about twelve years of age, either pulling pints or collecting and washing glasses. The pub back then was extremely busy: the Forum used to be more of a country venue, before transforming into the Town & Country Club in the 1980s.

All those heading to a gig would stop off at ours for two (or ten) pints beforehand. In the front bar I remember punters five rows deep, always seven or eight of us working, and a great buzz as we ploughed through the orders. The crowd would disappear about 8pm for the gig, and then pop back in at 1030pm for a quick drink before the tube home.
The owner, staff and roadies of the Forum would always come into the pub. They were great friends with my parents and always took over the bottom end of the bar.

Meanwhile, in the back, where our music venue was, the crowd was constant – three or four bands on every night, two hundred punters, sweaty, loud and lively. I loved working in there.

The back room in the 80s was run by a promoter called Jon ‘Fat’ Beast, a real character who built the thriving indie live scene from here with his Timebox club. Short, podgy, bright dyed blond spikey hair, Christopher Biggins Glasses, and funky clothes, my dad and him clashed regularly – but Dad could never argue with the crowd he pulled in.

Jon brought in many bands who loved playing at the venue, all raving about the sound system and acoustics in that room. Some names? Blur, Suede, Jesus Jones, Pop Will Eat Itself, Carter The Unstoppable Sex Machine, The Pogues, The Housemartins, PJ Harvey, Ash, The Darkness, The Libertines, Muse, Manic Street Preachers, Keane.

I remember when Coldplay performed and were signed by Fierce Panda the same night. I was watching Eastenders and my sister called me to come down and check out this new band – but there was clearly something gripping happening on the soap that evening as I didn’t bother. My one regret! She asked if she could keep their signed playlist – and still has it framed even now.
Madness played several times too, and I remember them messing around in the office getting changed before the gig, Woody with a colander on his head.

Who else? Gem from Oasis used to be stage manager here and popped into the pub for a quick beer one day with Dad before heading out for an audition for a band. A short time later he stuck his head back in the door and gave Dad the thumbs up…and off he trotted to Oasis.

So, after my parents had run this fantastic pub for over thirty years, it was with emotional curiosity that we stepped back into the revamped pub on opening night after its Young’s makeover back in 2015.

And we all felt really positive about the changes: it looks great and is offering a totally different type of pub, and there were a few old locals there too, which made for a nice reunion. The staff and manager Rebecca looked after us all night, and it was good to see life back in the place again after it had been closed for so long.

Although, for me, of course, it was still somewhat bizarre to see a cocktail bar where our bathroom used to be – and a pianist in my parents’ former bedroom.
The Bull & Gate is open daily at 389 Kentish Town Road, London NW5.

In October 2022, Kentishtowner will celebrate its 12th birthday. But with the sad demise of our free independent monthly print titles due to advertising revenues in freefall, we need your support more than ever to continue delivering cultural stories that celebrate our neighbourhood. Every contribution is invaluable in helping the costs of running the website and the time invested in the research and writing of the articles published. Support Kentishtowner here for less than the price of a coffee – and it only takes a minute. Thank you.