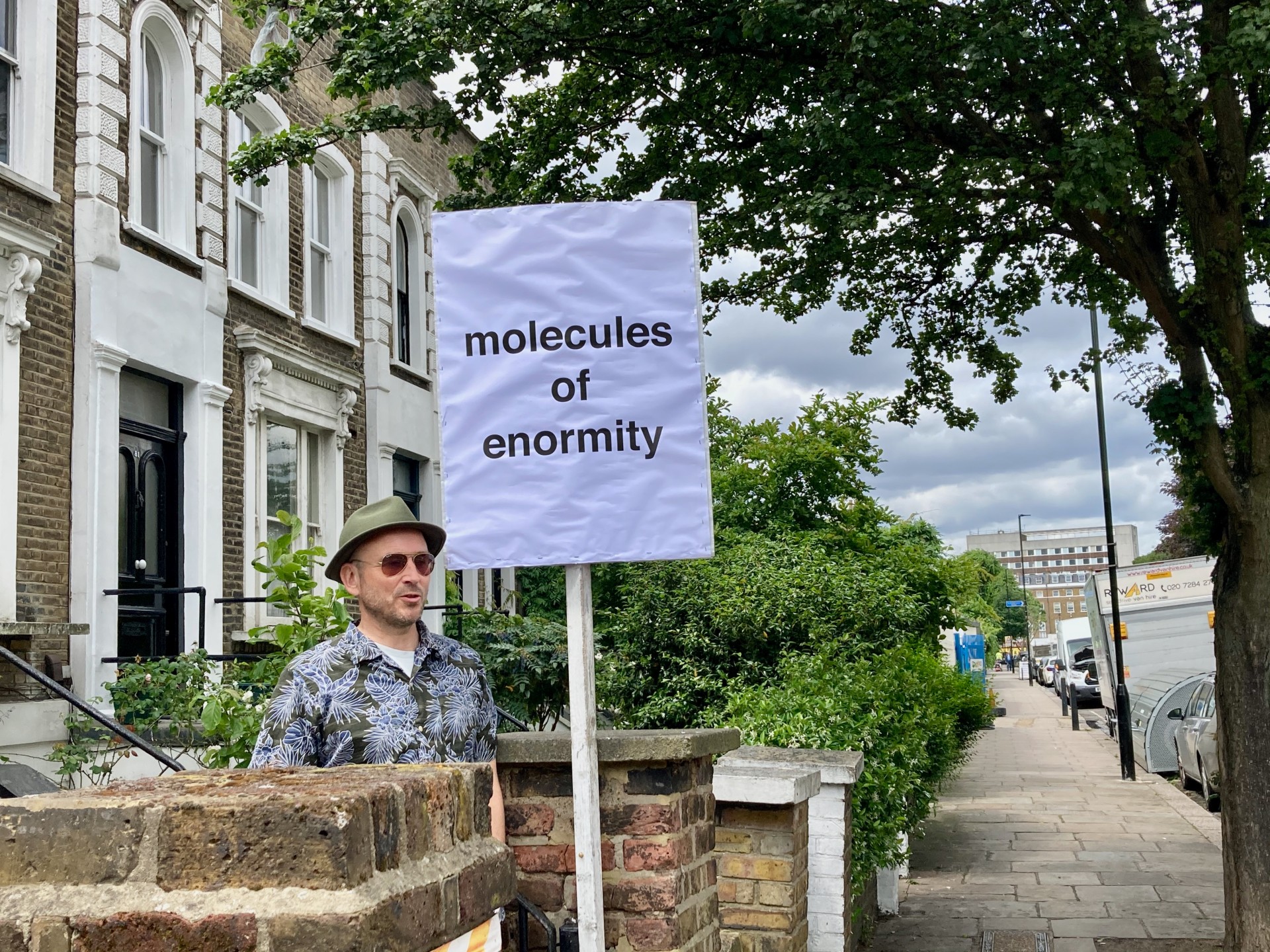 Mark Waddell is a new breed of comedy-poet-libertine. While his poems have appeared in acclaimed tomes like Great Poets of the 21st Century, round these parts he is also known for the street signs that keep popping up across Kentish Town.

More at home in a bar than a library, Mark takes his poems to the masses with his live shows, and was once a regular performer at The Torriano, the legendary NW5 venue (and now the Rose & Crown pub) known for performances by Pete Doherty, Noel Fielding and Lianne La Havas.

With his new book out now, we asked him to write about his love for the neighbourhood – and what inspires his eclectic body of work.

People are places. I’ve lived here in Kentish Town for 15 years or more…time blurs. This neighbourhood bursts with bonhomie, shaken and stirred with grit. London has always been good at mixing.

There’s characters galore lurking on every street. There’s posh, there’s poor, there’s cocktail haunts and not-as-dodgy-as-they-used-to-be-boozers, there’s a blind guy tapping his way around obstacles and people who think they see everything, there’s Mr 20p Guy who offers me a hug and asks intimate questions that can’t be printed here. People!

I carry a tiny notebook everywhere in my top shirt pocket and scribble down passers-by’s words caught on the wind or scrawled graffiti which become poem titles. I am a Word-Thief stealing from the unknowing genius of K-Town people. Guilty as charged, Your Honour.

There is a street sign outside our place on Islip Street. It is there to intrigue and tickle people pink. To make folks think, chuckle and ruminate. One night someone scribbled words onto it that later sprouted to life as another sign ‘the resistance of existence’. Stuff happens if you put it out there.

I’ve previewed this latest collection by setting up a ‘free-poem takeaway’ service outside our flat and have even received audio recordings of people reading my poems out loud.

The other day a young woman walked past whilst I was putting the bins out (how Covid rock ’n roll!) and asked if I had any food allergies? Soon afterwards, a red bag appeared on the doorstep loaded with delicious vegetable pepper curry, dosas and condiments along with a note to say: “thanks for bringing a smile and fun reflections with all your wicked poetry during these strange times.” People!

Some poems were directly inspired by the area. ‘Pandemic poem # 1’ was unleashed when I saw two young sisters taking a cat for a walk on a leash during lockdown. ‘I saw a man today’ is about an ‘old-stork-man-baby’ I spotted in the changing rooms at Kentish Town swimming baths and ‘So many near misses’ is about the myriad moments of danger we face going about our daily business.

My new book ‘Particles of Wonder’ has happily been well received so far. R.J. Ellory, best-selling author, called it a ‘magical collection’ explaining ‘the thing that really gets home to me is the humour’. And Susannah Herbert, who used to run National Poetry Day, called it ‘a blast of joy in troubled times’.

So whilst humour runs through the veins of my poems and illustrations there are also underlying shadows as there’s no light without dark. There is often a dagger lurking, something that twists away for those who look, the sugar-coating of levity making the search for meaning – in the face of inevitable mortality – more palatable.

The ability to laugh at oneself is what I most want people to take away from these poems. That and a questioning sense of mischief. Not to mention, of course, an enduring love for this unique postcode.

Particles Of Wonder, the new poetry collection by Mark Waddell is published by Valley Press UK and is out now priced £9.99. For more on Mark Waddell, and to buy the book, head to his website