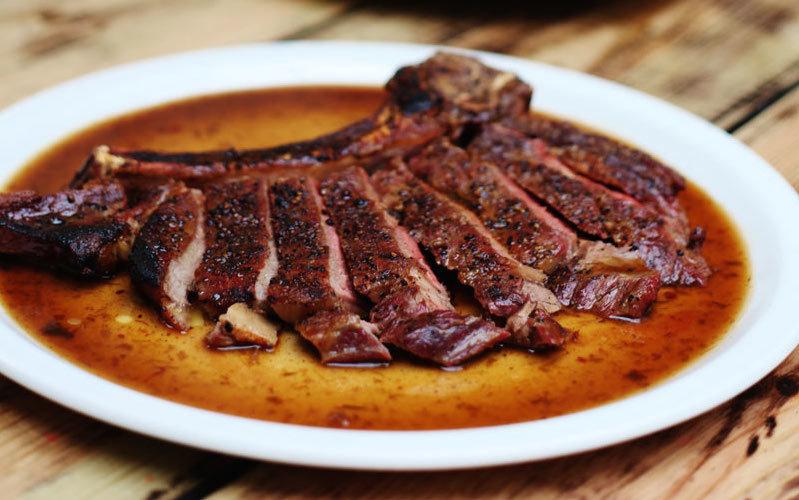 Who knew its steak and chips is a revelation? And better still, this NW1 institution is BYO

Age: 12. This proper NW1 institution first opened in 2007; on its website it even calls itself “one of the longest-standing Latin Caribbean restaurants in London”.

Where exactly is it? Right there on the lower Kentish Town Road, just before it bleeds into crazy Camden. It’s sister to the famous (also BYO) Bintang, newer Ramo Ramen and boutique ice cream parlour Mamasons. In short, this is a hectic local family empire.

What should I eat? The menu specialises in cuisine from Jamaica to Colombia and Mexico. Over the years we’ve fair grazed much of it at different sittings, from sticky ribs to tofu tacos, not to mention the half jerk baby chicken and the curry lamb. But on our last visit, slightly lubricated by a pint at Camden Brewery, the only thing we fancied was steak.

And how was it? In short, the 200g filet mignon is a revelation, its caramelised exterior textbook-seared on the grill (the charcoal must be white hot to deliver such a deep, criss-crossed finish). Once sliced, the pillowy rare meat proved exactly on-point pink, umami-rich juices leaking through. The savoury thwack was heightened further by a rich gravy, studded with cubes of feta-style soft cheese. And it was offset by a tangy mango-dressed Caribbean-style side-salad.

Chips? These need to be ordered separately, the golden sweet potato fries (£4) winning out over parmesan and truffle (£5). Or just stick to the hand-seasoned regular ones.

The interior: As eclectic as the food. There’s lots of wood, bamboo, a mural or two, and a cellar toilet. Plus a useful daytime café next door.

And what do I drink? It’s BYO so we would say wine, of course. Beware that corkage varies depending on the day you eat. Monday-Thursdays it’s £3 a bottle, doubling on Friday and Saturdays to £6. There are varying charges too for beers depending on size. It’s all fair enough, though.

Is there a downsize to any of this? Only the price of steak generally in the capital these days: the fillet alone is £22 so it’ll set you back £26 for steak and chips; a rump is a slightly easier-on-the-wallet £16 (without chips). But, as with nearby Italian destination Anima e Cuore, the BYO offer makes a quality meal cheaper than it would be elsewhere.

What’s the service like? Quite laidback and slightly one-eyebrow-raised at the sometimes hedonistic crowd who cram the room. And although empty as we arrived at an early-doors 6pm, by 7pm it had filled up with a diverse crowd of locals and blow-ins.

Do say: ‘This is some of the best steak in north London.’