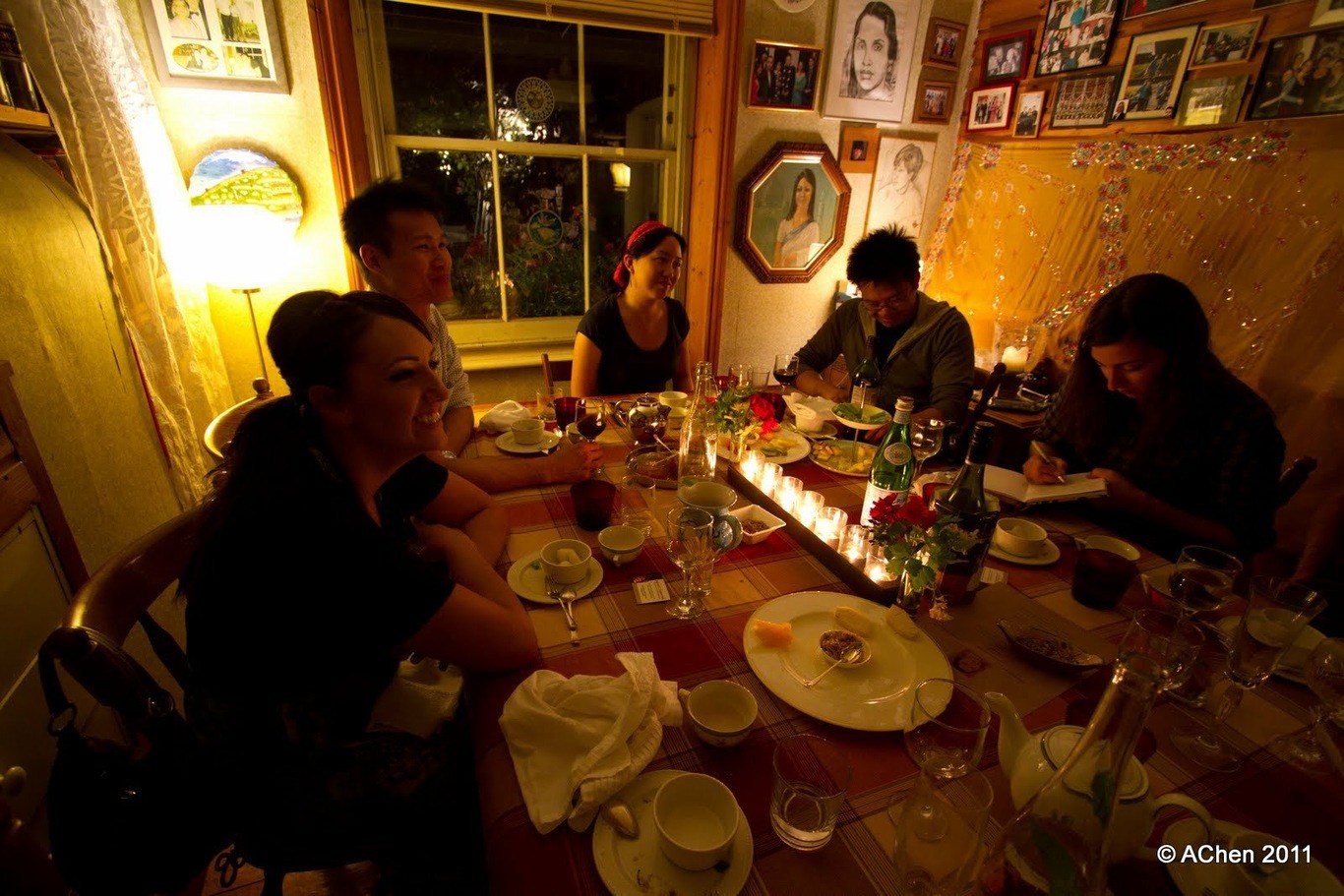 hen that doorbell goes we’re nervous every time,” says Saira Anna Baker, one half of the team whose much-loved hobby is coming into its tenth year. Her mother Rani completes the picture: together, they’ve served almost one thousand people dinner in the cosy basement of their house during the last decade.

Jitters certainly don’t show on the evening we visit. Saira welcomes us warmly, and as we descend into the homely space we’re greeted by her father Graham with a glass of fizz. “He’s so good,” she says, “great at breaking the ice and always sits with the guests.”

Every available surface and wall is filled with family photos; the dining area is dominated by a large twelve-seater table. We take our places: brief introductions are made and the sound of chatter soon fills the room. The beauty of a dozen diners? A number of separate conversations simultaneously occur, creating a relaxed environment.

Next to me is Catherine, a woman who lived in the property as a lodger back in her student days – she’s kept in touch in the decades that have followed. Over the other side is returning attendee Leslie, who’s been in contact with Saira requesting a memorable aubergine dish she enjoyed on a previous visit. Here is a very personal project with a lot of love put into it.

After a quick, informal introduction from Saira, we get eating. Homemade paneer, tomato and courgette kebabs kick things off, followed by spheres of spiced lamb koftas and a fish course of masala tilapia. Chutneys, raita and fiery green chilli sauce – each one made from scratch – dot the table, all highly recommended.

Mains are served in big sharing bowls: we dig in eagerly, passing them up and down with no trace of formality. Plates are piled high with signature chicken murgh masala, portobello mushroom masala, tarka daal and rice. Plus there’s plenty of still-warm roti for mopping.

We’re pleased to leave just enough room for dessert, a fragrant flan-like pudding topped with coconut, slithers of almond and dollops of passion fruit and mango coulis is light and super smooth. And masala chai, the delicately spiced herbal tea, is a restorative finale.

Saira and Rani – exhausted yet relieved to have pulled off another successful event – join us for a glass of sparkly, and I grab her for a chat before heading home. “It’s great fun,” she says, “we can’t believe we’ve been doing it for almost a decade.”

So, how did they get into it? “One evening we were watching a Jamie Oliver programme,” says Saira. “He went to a supper club in the suburbs of New York and my mum said how cool it looked. A lady and her family were cooking; people went along and paid $15.

I thought it was such a lovely idea, and then my brothers, and my best friend, said I should do something similar. I set up a WordPress website and a Twitter account, a few people started following it – and that’s how we began. We had seven people at our first event. There certainly weren’t too many going then; in terms of what we did at the time it was unique.”

Over the years some things have changed, others have stayed static. “The amount of food has lessened, we made so much when we first started,” says Saira. “We’ve always used local shops for ingredients – the fishmongers in Holloway, Fam on Fortess Road.”

And the name? It’s inspired by Rani’s mother and Saira’s much-loved Punjabi granny. “It’s in memory of my nanaji Joginder,” says Saira, “she died when I was four. I have strong recollections of things I used to do with her: standing on a stool stirring milky chai, learning how to make roti and doing a Snow White jigsaw puzzle together. The murgh masala we serve is her recipe, it hasn’t changed.”

With that big ten-year milestone coming up in 2019, what’s in the pipeline? “We’re just so happy that people still want to come along, but we are trying to think of quirky things to do to celebrate.” says Saira. “In the early 1980s Mum wrote a book – Indian cooking for busy English people – that she sent to publishers.

The general response was ‘thank you, this is so interesting, but Madhur Jaffrey has the market’. So I think I’ll do a self-published collection of those creations, or maybe a supper club cookbook. Perhaps some cookery classes, we do them occasionally at the moment.”

But one thing’s for sure: they’ll still be throwing open the doors for more hungry guests.

This is box title
The next supper clubs are on Sat 12th Jan & Sat 2nd February. They’re BYO and cost £35 per person. More info here.