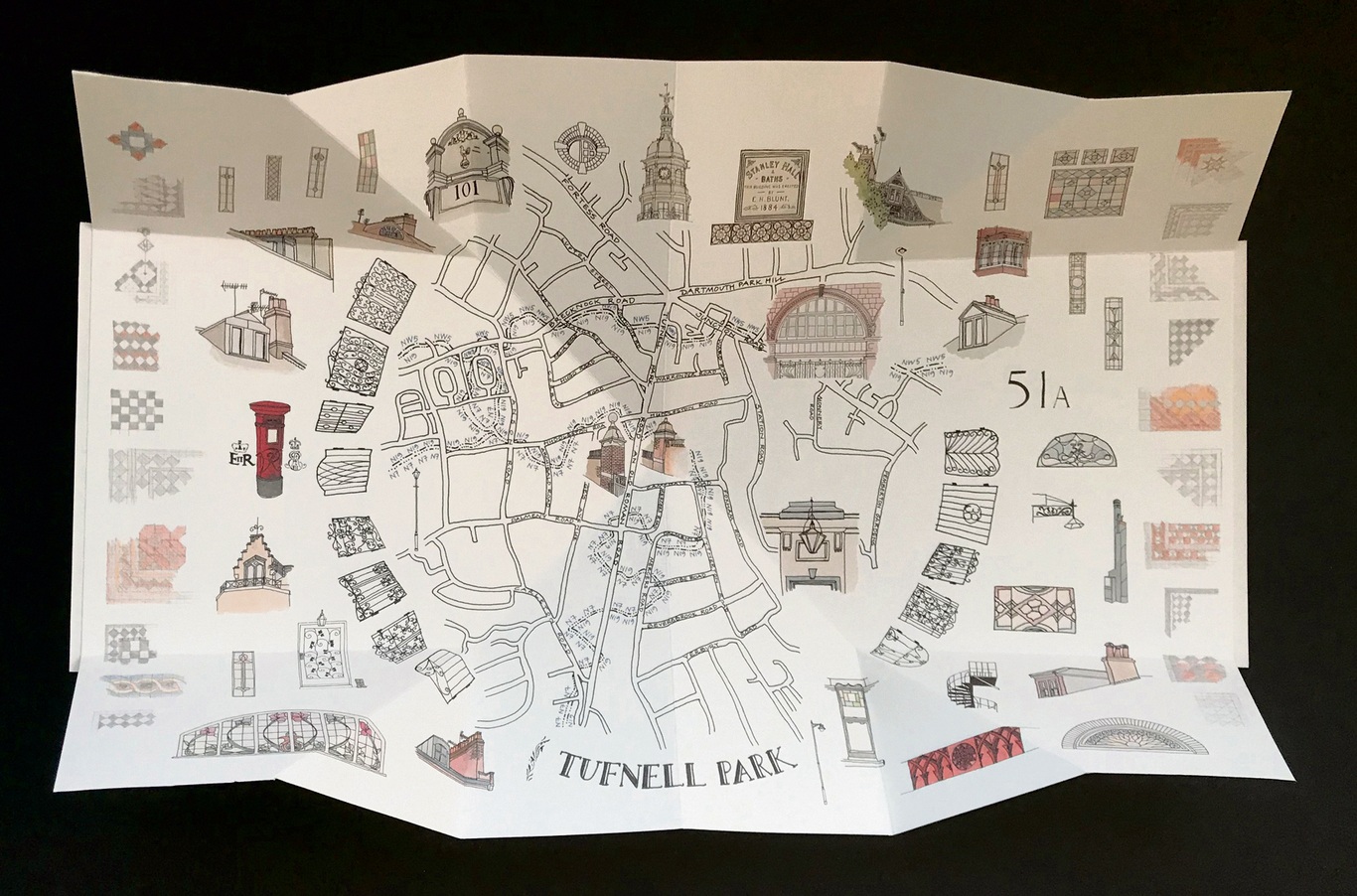 OMG! Look at this map of Tufnell Park

We chat to artist Christine Nicholls about her intricate mapmaking

ow well do you know the area you live in? Christine Nicholls, a local resident for thirty years, felt she knew hers thoroughly until one day she stumbled across a street she’d never been down before.

“I was walking along Tufnell Park Road with a friend,” says Chrissie. “He and I were in deep conversation and weren’t ready to go home. We carried on strolling, went left at Warrender Road and then right by the sorting office.” Between them they’d lived in the vicinity for sixty years, yet neither knew that particular spot.

And so the concept of creating a map came to pass. At that point Chrissie began looking at everything around her. “I decided to record all those small little bits about the neighbourhood that I didn’t know.”

What went into making the piece? “It was very time-consuming,” she says, “With a plan of the locality I wanted to cover –there had to be a limit – I walked down every road armed with sketch book and camera.”

Detail is what Chrissie thrives on, it’s her inspiration. “The variety of gates here is fascinating, and also the tiles – I didn’t realise there were so many beautiful ones in the walkways up to houses.” Lettering is one of her favourite things: she spied an “absolutely beautiful” 51A and added it to the creation.

The process was a real labour of love: Chrissie did all of the illustrations by hand, using a mixture of pencil, watercolour and ink – and made the map as well. “It’s a very old style Turkish fold; it took me so long to figure out,” she says.

She also produces them for other parts of the capital. “They’re all called things like tittle tattle, dilly-dallying or noodling. It references my fact-finding which is often hearsay and gossip. You’re not quite sure if it’s right – but it’s intriguing and makes you want to find out more.”

But Chrissie hasn’t always been in this line of work: up until two years ago she had a longstanding career in business management. “I had a well-paid job,” she says. “but thought, I’ve got to do something with my life: now’s the time.”

Yet she’s always been creative: “I trained at St Martin’s and studied fine art printmaking in Brighton. I’ve always drawn – it’s how I relax.”

When Chrissie first started the Tufnell Park map she thought it was going to be a one-off and was going to call it ‘Give us back our ball’. Back in the day, she explains, there was a manor house where the Odeon on Holloway Road now stands, the gate posts to which are up by Lady Margaret Road. Chrissie spotted one of the pillars was missing a ball.

“Somebody told me that English Heritage came along, thought it was unsafe and knocked it off. I got in touch with them; they said it was nothing to do with them. Then someone else said that the ball was behind the wall. I had a peer over and it is – just sitting there.”

She also discovered that Pamela (the Pedestrian Accessibility Movement Environment Laboratory) is in N19. “Apparently it’s home to a recreated tube carriage used to test flooring for people with disabilities.”

The pearls keep coming: “I also adore the fact that the area was supposed to have a park – maps from the 1850s show one – but it never actually did. Developers thought the land was too valuable and built over it.”

Chrissie’s learnt a lot through this venture: “I got chatting to a lady on Huddleston Road – as you go down into her cellar there are three panels that haven’t been decorated over with a list of times and dates of air raid sirens during World War II. It’s amazing finding out these snippets.”

Her passion for the community is clear. “I walk up the street and there’s always someone to talk to – that’s a special feeling. The residents are very open; so many people I know are terrified of London.”

Aside from mapmaking, Chrissie does other locally-based work, including lettering for Ruby Violet, and blackboards for Tufnell Park florist Violet & Frederick. She’s also artist-in-residence at Highgate Allotments and uses the Heath for inspiration, creating cards featuring the ponds and cut-out images of trees. “I like doing projects that are close to home and being able to give something back,” says Chrissie.

She’s certainly given us something to ponder, as we wander the streets of Tufnell Park trying to figure out where the devil that 51A is located.

The maps start at £15 (A4) up to £30 for a folding version. Contact Chrissie: studio@inkpotandpen.com. Info here. The maps are also stocked at iyouall, Coal Drops Yard 113 Lower Stable Street N1C, more info.