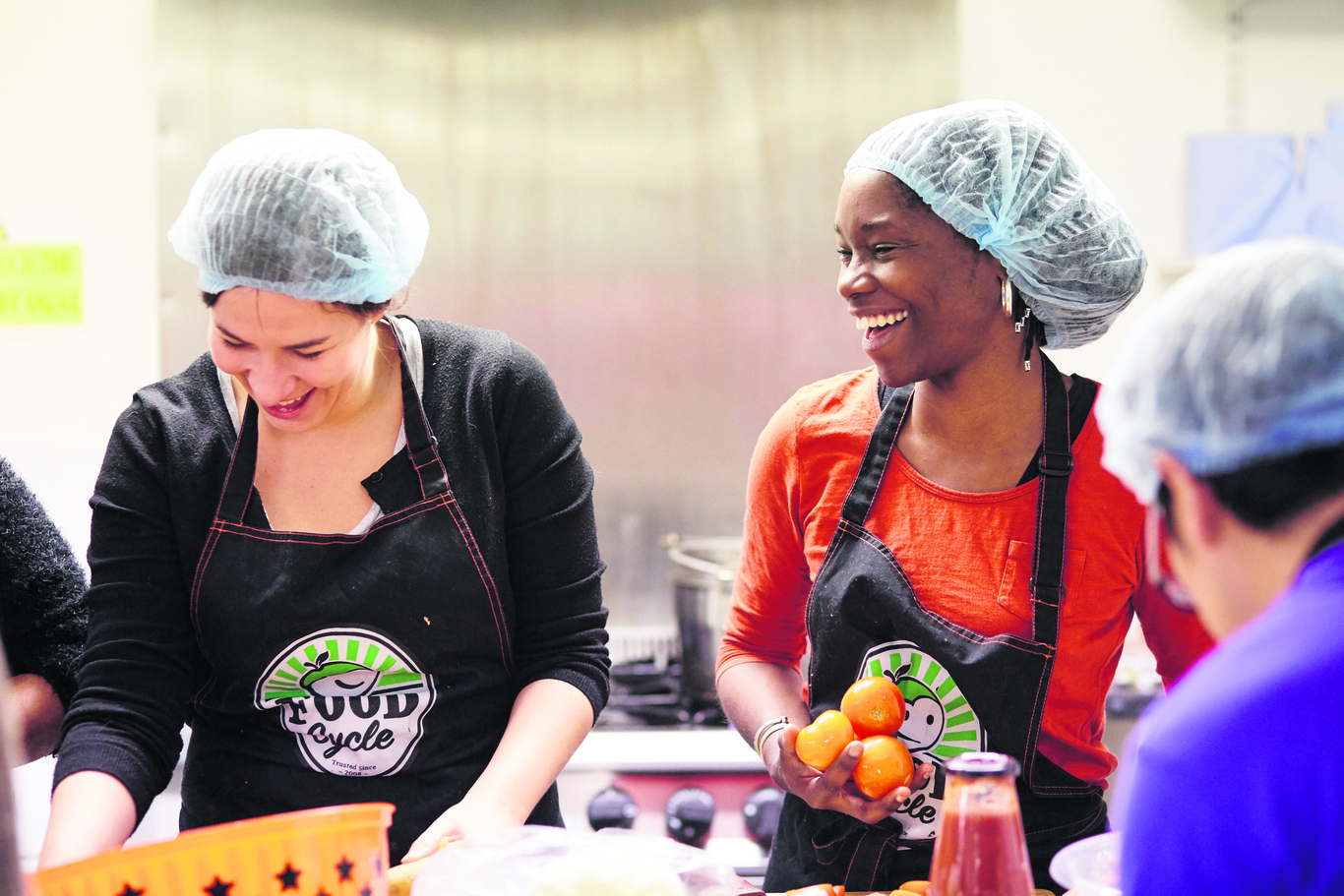 Find your place in the FoodCycle

t’s the Tuesday night commute and I’m stuck in a spiral of scrolling and salivating over FoodCycle Finsbury Park’s Instagram. Spicy aubergine parmigiana with boulangère potatoes and purple sprouting broccoli, cottage pie with caramelised fennel, artichoke and sautéed kale, raspberry cake with mango coulis and grilled apricots – just a handful of the most tastebud-tingly.

Finsbury Park is one of 13 locations across the capital (others are in King’s Cross, Hackney and Peckham, with venues spanning the breadth of England) where FoodCycle dish up a delicious and nutritious three-course vegetarian meal once a week to, well, anyone who would like one.

“We are open to everyone,” says Matt Fazal, FoodCycle’s regional manager for London, “you don’t have to be on a low income or from a certain background. There can be absolutely no reason for your visit other than the fact that you want to have a meal and want to have a chat with some new people. There are no formalities, it is all about creating small communities and safe spaces.”

On an average week the grassroots initiative feeds 500 Londoners, in donated spaces (synagogues, churches, community centres and the like), using only surplus food (1000kg of it in fact). And the best part, it won’t set you back a penny.

It all started when FoodCycle’s Canadian founder Kelvin Cheung launched the charity here in 2008, thanks to a combination of his love for food, cooking and community and a growing frustration with food waste. They initially formed around universities – LSE, Imperial College – though it grew difficult because students would disappear over the summer. They started to evolve, spreading into the wider community, while retaining the same notion that it is illogical to have, on the one hand, hungry people, and on the other, tonnes of surplus food, beelining it from the supermarket shelf to a landfill-tomb.

According to Matt, the process of preparing a meal is a bit like taking part in a game of Ready, Steady, Cook. In effect a kitchen full of strangers – all volunteers – are presented with a pile of miscellaneous food, tasked with turning it into something delicious. “You have to get creative,” says Matt, “chucking a load of veg in a pot and calling it a stew doesn’t cut it.”

Much like their open policy for guests, the door is open to volunteers with a variety of skills and backgrounds. Budding chefs team up with those who are just about able to peel a potato, the more sociable take on roles as hosts, chatting to people while they eat; others stick to distribution and collection roles, cycling to a local supermarket or hotfooting it to a donor close-by.

Though reducing food waste is one of FoodCycle’s central goals – one facilitated by essential food distribution charities like City Harvest and the Felix Project – their primary purpose is to tackle food poverty and social isolation or loneliness.

Matt recalls seeing the direct effects of food poverty in a “transient, increasingly gentrified city that is producing forgotten members of the community alongside it.” At the end of each meal the team tend to have leftover food or fresh produce that they offer their guests to take away and cook for themselves at home.

“It’s very eye-opening,” says Matt, “to find yourself speaking to people about how, for example they should cook a sweet potato, and have them respond by saying that they don’t have an oven, or that they can’t afford to turn it on.”

Despite experiences like this, Matt finds himself torn between calling on the government to do more for people who are considered to live “on the margins,” while needing to acknowledge that these governmental shortcomings ignite the potential for local communities and organisations to realise that they have a duty to get together and fill in the gaps.

All that’s left to do is find your role in the food cycle. Will it be doing Ainsley Harriott proud in a fetching apron or tucking into a three-course meal chatting about your day to a stranger?

FoodCycles are in Angel, King’s Cross and Finsbury Park, as well as ten other locations across the capital. Want to set one up closer to home? The floor is yours. For more info head here.