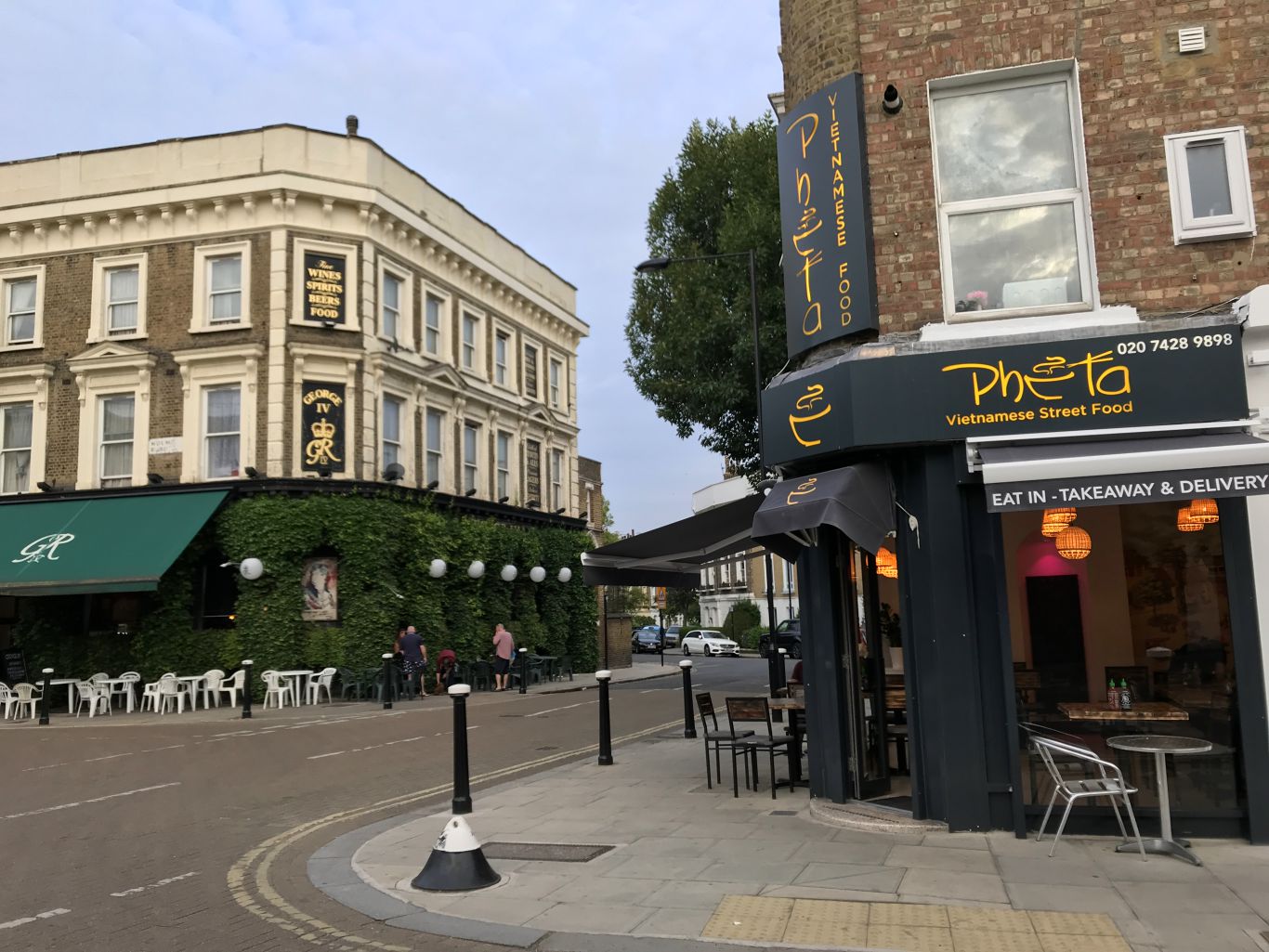 ot quite as much of an ingénue as you might expect, low-key new arrival Pho Ta is actually the second branch of an established (and respected) Vietnamese streetfood café in Battersea.

The site was previously Gold Dragon Inn. Doesn’t ring a bell? Before that Forever Autumn made for a decent-enough specialist in Szechuan cuisine. And, rewinding at least half a decade, it hung on for aeons as The Cabin, an odd mix of greasy spoon and Chinese takeaway with fading press cuttings on the window (the Peter O’Toole movie Venus was filmed here).

Now the space is extremely airy, with simple wood tables, astroturf on one wall, and along another a mural of a street in Hanoi (see below), which imagines Pho Ta if it were in Vietnam rather than NW5.

Sliding windows open the cosy spot out onto a cute pavement terrace that directly faces the diminutive park and traditional boozer the George IV (on our visit, a few tipsy regulars were having something of a brawl outside, it has to be said).

Find out more about video ads for your business
On the menu? Salads, buns, ‘broken’ rice dishes, an extended vegetables section, and of course pho. Dainty goi cuon ga, summer rolls, served cold, were lightly filled with vermicelli and king prawn, better from a dunk into a rich peanut sauce; while nem hai san was a sliced, browned and crispy spring roll of crab, pork prawn, lettuce and herbs.

We loved com gua nom, charred-skin boneless thighs as tender as chicken can be (served with fluffy ‘broken’ rice and pickles); but it was the big bowl of pho tom which excelled. Fat king prawns bobbed away in a spring onion-heavy, highly aromatic broth made of chicken stock, reduced and reduced for twelve hours, with accompanying bean sprouts, chillis, lemon and hot sauce to customise as we wished. I particularly liked the generous fresh-washed handfuls of herbs to chuck in, including glistening mint, parsley and coriander.

Drinks-wise, it’s a semi-BYO (same as newly opened Ramo Ramen), as beer is on hand at just £3 a bottle, or for a fiver’s corkage you can bring your own wine, as we did.

Why NW5, we wondered, as we left? “Our family sold pho in Vietnam for such a very long time, then our first shop was in Dublin, and so we decided to bring the taste to London,” says owner Thoa Nguyen. “We’ve opened in Kentish Town as we just felt that area is so peaceful with lots of nice people.”

She said it. So what’s the secret to good pho? “It must be cooked slowly from 10 to 12 hours, with the bones, cardamom, cinnamon, anise, ginger, onion and other Vietnamese spices. The smell must be exactly from the beef or chicken mixed with the aroma of spices.”

A week later we popped back to try another classic, the bun cha, a wonderful mix of dinky pork patties, slices of melt-on-the-tongue belly and a sweet, intensely meaty broth.

Verdict: this one’s a stayer. And Kentish Town’s quality BYO dining scene gets stronger and stronger.