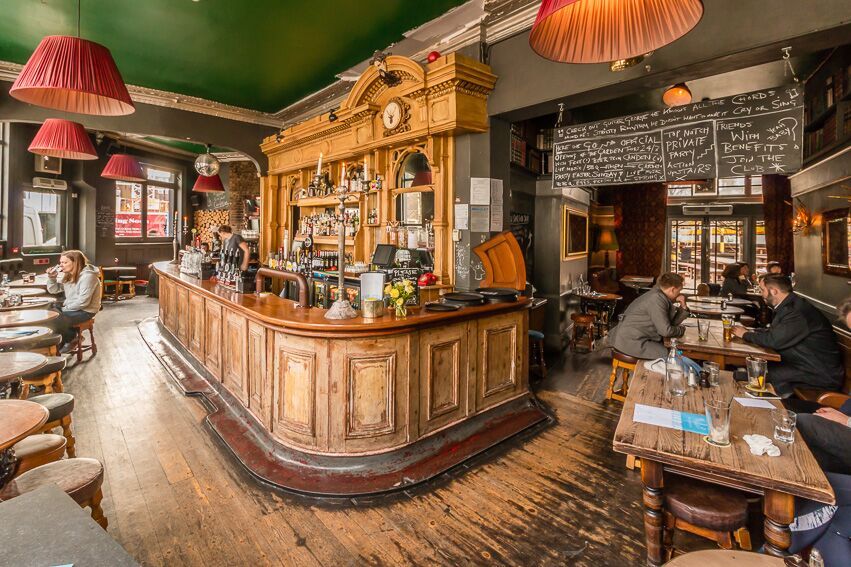 So what’s the deal? The affable midweeker at the Gospel Oak superpub, coming up to its tenth birthday this summer, originally started life as a ‘bring-your-mate-and-they-eat-free’ offer. Which is sweet. But now, while it’s still called Best Friend Tuesday, they simply offer half price on all food (rather than your bezzie eating for free). You don’t have to pre-book, but if you don’t, good luck getting a table.

What’s the usual price? Well, that depends. Starters are from about £4.50 normally, and mains from £9.50 (up to £20 for rib-eye). So half those prices works out pretty nicely.

Talk us through things. We sat in the always-tight horseshoe-shaped bar area (regard that Victorian back bar), perfectly candle-lit, bunting-strewn, and packed to the rafters, an army of servers swirling around. In fact, I don’t think I’ve ever seen the Stag empty.

The Scotch egg has been a must ever since the pub introduced it nearly a decade ago, and sure enough it didn’t fail: creamy yolk, warm meat, pool of mustard. Gone. (“Still the best ever,” declared the partner, who’s gobbled a few in his time). Smoked salmon was a surprise too: smoked for 72 hours in the garden, it eschewed supermarket blandness for depth and complexity.

We tried one ‘foodie’ main: a crisp-skinned cod perched on grilled courgette, chewy fregola and almonds, crowned by a gloriously charred lemon half; delicious, but it couldn’t compete with the majesty of the signature flat-iron chicken, in a stock which, said the server, takes hours of reduction to reach its umami-heavy heights.

To drink? So here’s the bomb: drinks are full price. Not totally surprising then that many bargain-hunting midweek punters were sipping away at the free bottled tap water. As for us, we guzzled a light French pinot noir.

Busy? Beyond busy. And then some. Our advice is to chance it only if you don’t mind waiting. However, by 9pm, the rush was over and several tables became free.

When is it? Tuesday evenings, from 6pm.

Other deals worth investigating? A few, actually. Every weekday lunch is also 50% off food (nice, 12-3pm); and there’s a monthly Beer Club which offers 4 beers and chicken wings for a tenner a person.

This is box title
The Stag is open daily till 11pm, Fleet Road NW3. More here.