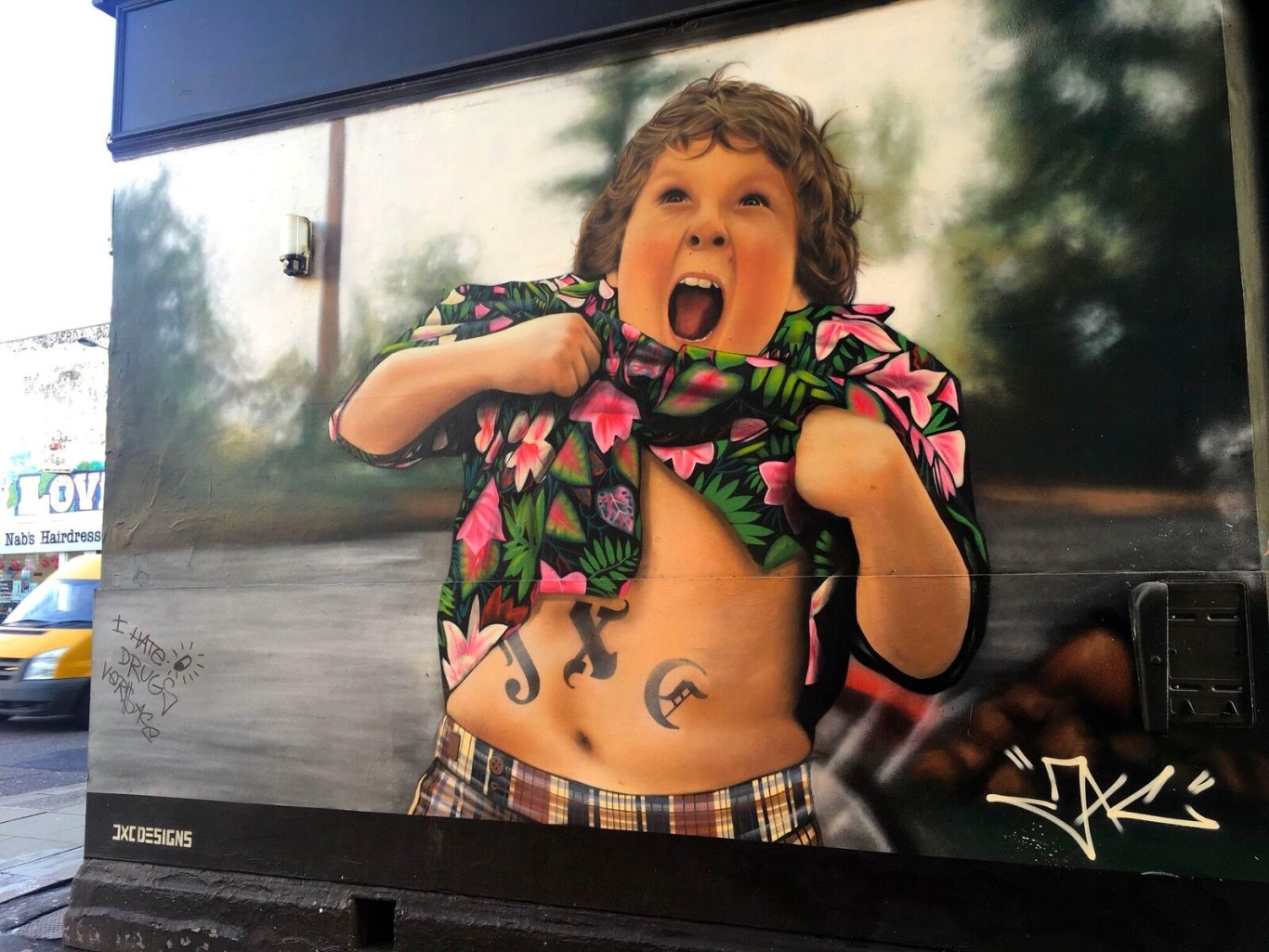 For the past six years Nelly Balazs has been flitting around the capital snapping graffiti, street art and the people who create it. With time, her hobby started to take priority over her office job until three years ago she abandoned her desk to put on a fetching pair of walking shoes.

Hungarian-born Nelly now runs Camden Street Art Tours, two-hour long trots around the borough, where she shows knowledge-hungry locals and insta-stoking tourists alike some of the most esteemed urban artworks in the area. “When we first started running the tours we covered 80% of the art in Camden,” says Nelly, “since then, there is so much more work out there, we now do just over half.”

The purpose of Nelly’s tours isn’t to hurtle around as fast as possible, scoffing down snippets of art; rather, she wants people to have a better understanding about street art.

Nelly initiates her daily meanders outside Camden tube, where she starts by setting out why London is such a hotbed of urban artistic activity.

Firstly, there’s the sheer quantity of visitors, she says; we are, after all, residing in the second most visited city in the world. “Then there’s the number of us who are on social media,” says Nelly. “Broken down by country, we are in the top 10 social media users worldwide, and we’re only a small island.” This has an inevitable draw for aspiring artists, whose exhibition space is the public domain and whose acclaim depends on the public’s response to their work.

“The game completely changed with the rise of Instagram,” she says. In other words, slap your handle on the bottom of your piece and voila, there’s the following, there’s the opportunity for notoriety, sponsorship and commissions.

“If we think back to the first generation graffiti scene that grew in New York in the late 1970s,” says Nelly, “it was all about painting on trains. With no internet the only way to get visibility was by painting on a carriage that travels overground across the city.”

It is a completely different ballgame now but this is where the graffiti and street art scene first blossomed; and this is where the roots in the connection between urban art and illicit activity lie. “Artists would spraypaint under pressure in the dead of night,” she says, a pursuit made more alluring since there was a potential for arrest.

For someone like Nelly, who is embedded in the capital’s outdoor arts scene, she is used to coming across artists who still hold what she regards as fairly archaic attitudes towards urban art. “There are those who refuse to work in the mainstream circuits, don’t want to paint with permission and retain a very outdated mentality – in line with the views acquired in the States some 40 years ago – that it’s not graffiti unless it’s illegal,” she says.

Likewise, the belief that art on publicly visible surfaces is unlawful has sustained in the public. Even as Nelly stops our tour to swiftly spray black paint over a surface that had been vandalised with a white marker, she’s tutted at and heckled at by passers-by joking (we presume) about calling the police.

“Through my tours, I really want to dispel myths that every piece of street art, all over the world goes up illegally,” says Nelly, “people who do this full-time don’t want to run from the police, they don’t want to paint at 2am where they can barely see the colours and what they are creating.”

As such, Nelly, who is a lot more than an avid photographer and tour guide, has been instrumental in organising legal walls. It is therefore her job to locate and orchestrate the artistic contributions to different surfaces – all of which she has gained permission to paint on.

Over the years, Global Street Art – the umbrella organisation for the Camden tours – have set-up close to a thousand walls in the capital. In NW1, Nelly’s been managing the multiple masterpieces dotted along Miller Street for the past four years now. She says that she has solid support from the council as she keeps the strip vandalism-free and rotates the work on a monthly basis.

Throughout her recent career, she has found that boroughs competing to be crowned as London’s cultural capital are actively working alongside people like Nelly. Street art is after all, “the most visible and inclusive sign that an area can demonstrate that it is appreciative of art,” she says.

“I think it’s cool that the urban art movement went from being against the law but now governments are commissioning artists to paint big murals in their cities. This is a recurring theme in every city with a higher concentration of street art – like London, New York, Miami, Berlin – governments are working alongside artists to organise places in which they can showcase their work. There is a lot going on behind-the-scenes in this movement; the general public just doesn’t know about it.”

As a result of this collaboration, Nelly believes that both the quality of work and quantity worldwide is drastically improving. Both the public and artists are noticing this.

According to Nelly, on more than one occasion the biggest naysayers, the most fervent believers in the under-the-radar notion of street art, will, given a few years, call her asking if she has a legal surface for them.

With governmentally endorsed street art, what does that mean for the form’s more political voice – the little-man speaking for and to the people? Indeed there are a handful of illegal works dotted around Camden all of which Nelly makes a special point of noting along the tour.

“There is definitely a view going around, and I do agree to some extent, that if an artist has really political work and they get permission to do it then it is no longer that rebellious. The edge is taken off,” she says.

“There was undeniably a turning point,” says Nelly, “where the guys who did art on the side as a hobby and a way of putting a middle finger up to the establishment – think Banksy – soon became so popular that they’ve become full-time artists.”

For Nelly and the teams of other people who keeping the cogs turning on London’s less-underground-than-ever street art scene, the fact that this opportunity now exists is a very positive development.

For those who want to create accessible art – regardless of its message – in the public domain, with both mainstream support and governmental endorsement, the streets are more of a canvas than ever before.

Our highlights from Nelly’s art tour

1) Get Rich or Try Sharing
British artist MauMau illegally painted these socialist foxes three-and-a-half years ago. The artist was heavily criticised at the time because the pesky pair of foxes were painted over a ghost sign (the faded remains of a painted sign) so the owner would have to go through the complicated process of restoring the ghost sign in order to get rid of the work. MauMau responded by saying that his foxes – who are loitering above Natwest – cause a lot less damage to society than banks do.

2. Police Pigs
More from MauMau, these police-officer-piggies were painted in response to Fabric’s assumed-permanent closing down in 2016. The artist is suggesting that everything that is fun in the capital will eventually shut down and the police-porkers are a reccurring theme in his work. MauMau is one of few UK-based artists who does political work: this, Nelly says is because of the economic viability of creating controversial art. London is a competitive place; it’s hard to be a creative in a climate like this. According to Nelly, native artists are often stifled by their need to make their work more palatable and therefore profitable.

3. Amy Winehouse
This is one of six original Winehouse pieces to illegally surface in the area since she passed away in 2011. We still have five remaining, in varying conditions, which, according to Nelly, is a big deal. London is very highly visited by artists, available space is precious and pieces tend to have a limited life cycle as new artists constantly come here. For a piece to last for seven years is a remarkably good run for any street artist.

4. Amy (II)
This legal painting was organised by Nelly and Global Street Art in collaboration with the Jewish Museum. They had an Amy exhibition last year; it’s only a small museum “so they wanted an outdoor mural to advertise the event”, says Nelly. The owner of the property loved it so much that he decided that he wanted to keep it permanently. Nelly joked with creator Mr Cenz that he had lost her a space but was proud that the owner liked it so much that they wanted to keep it and really make it part of the community.

5. LIFE
This installation has been pieced together with 52 handguns. The Italian artists Urban Solid are coming back in spring to create a similar piece on the opposite side of Morley Street, this time entitled TRUMP.

6. B.Brave
This work, entitled B. Brave, is of the artist’s son. Donk has been perfecting his technique for a decade and has a unique style of paste-up. While lots of artists gather their subjects from other sources, Donk takes all the photos himself – they are generally of his family – and then produces the prints, treating them with tea so as to make them look more rustic and help them to slot into the urban environment.

7. Burn
Three years ago this suitably entitled work went viral. By UK artist Irony it’s still one of the most highly posted images on Insta and Twitter. Nelly states that even people on the tour who don’t take pictures – because they just want to listen – when they see this they swiftly whip out their phone to take a snap.

8. Invader
The acclaimed French artist is one of the top-earning and most notable street artists. Nelly tactfully leaves it for the end of her tour, to show people that it is the most important work. The reason for its significance is not because it has a message but because it is from an artist whose work has become so highly prized. Artists like Invader have single-handedly proven that this art form can have cultural, commercial and financial value, says Nelly.