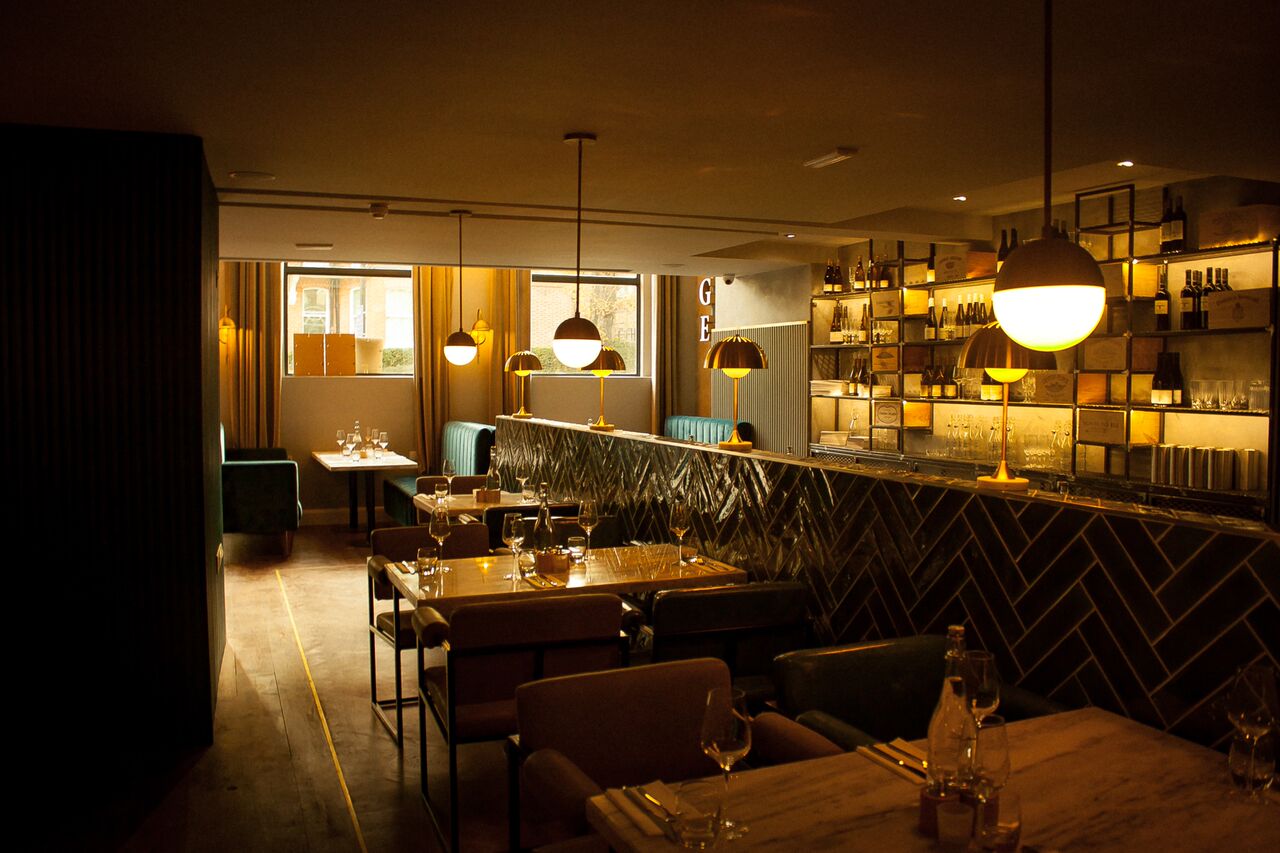 First there was Weng Wah House, the once-renowned Chinese stalwart that seemed to occupy the spot opposite the Premier Inn forever.

Then there was the Truscott Cellar, an attempt at posh wine bar with snacks cooked up by the former head chef at Dinner by Heston Blumenthal. Despite its credentials – including wide acclaim for its Maida Vale sister pub – it bombed far too quickly. We were sad about that.

And for a while that was it for this doomed site. But then a family-owned Crouch End joint called Melange quietly opened a restaurant in Kentish Town. Lazy Hunter, a mix of industrial chic, Scandi stylings and decent comfort food, was a hit. And so now they’ve stormed the heights to bag this derelict outpost for another of their lightly-themed restaurants. Keeping up at the back? Good.

The concept is, as they say in the blurb, inspired by “family trips to the south of France and Italy”. What it really means is a fairly unexciting sounding menu, if we’re honest. There’s calamari, oven-baked Camembert and antipasto misto to start; the likes of bream, chicken and risotto for mains. Oh, and the inevitable cuts of steak.

What sets it aside – at least for lofty NW3 – are the prices. We’ll come to the set midweek deal shortly, but a la carte mains are about £11 upwards, with rib-eye a reasonable £16.95.

They haven’t scrimped on the interior, either: effortlessly glamorous, it makes much better use of a difficult cube-sized space than its predecessor, which was dominated by a long bar, with little space for seating. Now there are tables, booths and stools, the effect mildly art deco, with teal tiles, panelling, exposed brick and globe lights. A little Orient Express, in fact. If there was a murder here – spoiler alert! – you’d be forgiven for thinking every customer complicit.

Assuming it will be dead on a chilly Wednesday night, first we sink a beer at the reinvented Wine Rack bar down the hill (not as cheap as it once was, alas, but draft Beavertown’s a not-bad £4 a pint). And so we’re surprised that, when we arrive at Melange at an early-doors 6:45pm, there are only two free tables left.

Which has a lot to do with the aforementioned set menu. During the week it’s a snip at £12.95 for two courses. Sure, the choice is a handful of non-zeitgeisty starters and mains that won’t worry followers of vegan, nose-to-tail or cauliflower-three-ways dishes. But still, as we are soon to discover, it proves a competent meal.

We share starters of smoked mackerel and a chicken liver pâté (I know, I know). And yet the plates both gently surprise: slivers of the moist oily fish lay criss-cross on a nest of creamy celeriac salad, sourdough crisps adding crunch, curls of cucumber shavings colour and clean contrast.

The accompanying parfait – for its silky smooth texture means that surely it isn’t actually a pâté? – is pure velvetiness, with cornichons, shallots and a zingy home-made apple and grape chutney adding vinegariness, sweetness and bite by turn.

I should mention that by this point we’re merrily guzzling a simple house red; at £16 a bottle its price must be as competitive as can be in most London restaurants.

Mains, served on earthenware plates, are very edible too: an acceptable £2 surplus bags us a 7oz sirloin, served exactly blood-red, its exterior charred. There’s a melting coin of garlic butter and pot of skinny, salty French fries, too, although we have to fork out another £1.50 for a barely touched peppercorn sauce.

And yet the (no-surplus) poulet au vin is the winner, its robust chicken leg slow-cooked in red wine with autumnal chestnut mushrooms, baby onions, lardons and herbs. Best of all? The smooth whorl of lick-the-plate-clean mash.

A note of caution: despite (or perhaps because) our choice of no-frills set menu plus cheapo house wine, a fairly persistent attempt is made throughout to sell us extras – sides, dessert, olives – by the friendly waitress.

We decline, although we don’t blame her for trying. But overall? Like nearby Franco Manca, this restaurant feels like a slick, unchallenging go-to on the days when you might feel all is wrong in the world. A useful tonic then, in the dying embers of 2017.