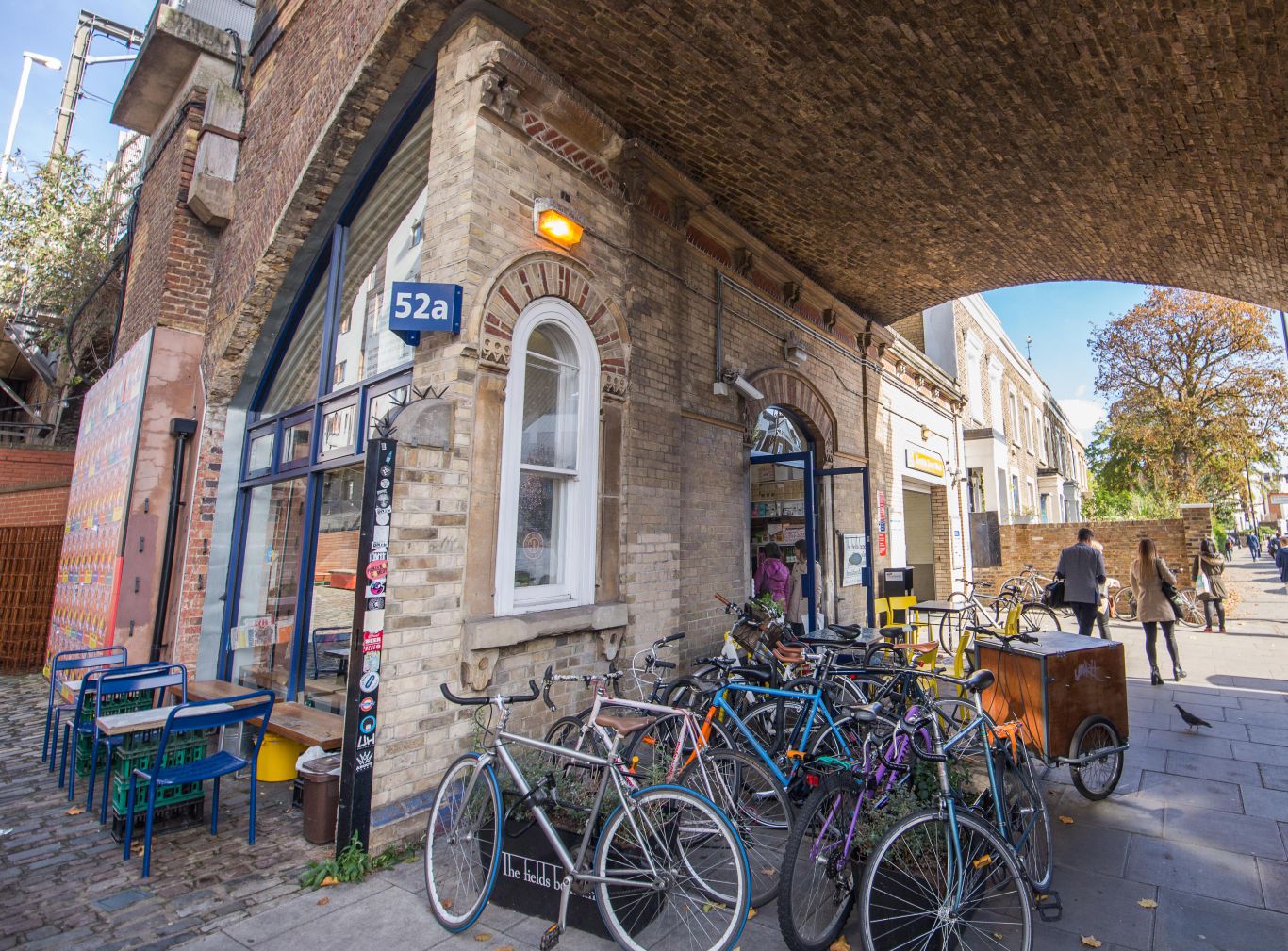 Why the grass is greener at The Fields Beneath

The penny dropped one morning when Gavin Fernback, the owner of Kentish Town micro cafe the Fields Beneath, was making a ham-and-cheese sandwich for the lunchtime rush. Suddenly he comprehended what he was doing and realised his honeypot of a café could serve animal products no more.

This was neither the first or last time Gavin experienced a Damascene moment, permanently shifting his conceptions of animals and his relationship to them. He has, after all, spent a considerable amount of the previous years gorging on information, reading, fact-checking, listening to people’s experiences and watching documentaries to learn more. “It wasn’t that I was questioning veganism,” he says, “I just wanted to know more.”

Gavin would watch films, the gory, slaughterhouse stuff, but also “the cuddly, cute side of animals as well. It no longer felt right putting ham in a sandwich,” he says. “I used to think that veganism was just excluding things I want. I loved cheese, why would I want to give that up?” he continues, referring to a sign held at vegan rallies. “It reads ‘“I will never be vegan” – Me, 2012,’ this is a common story for a lot of us.”

It took Gavin almost four months of calling himself a vegan before he committed completely. “It was still a process. I wanted to know more, I was still hungry to learn and listen to other people’s experiences of their transition and thoughts on the matter.”

Gavin was unconvinced by the health angle, stuck between doctors ardently labouring their case from either side of the dairy-debate. Simultaneously, he remained aware of, but not propelled by the environmental arguments. For Gav, it was all about the animals.

“The final sledgehammer to my feelings about animals hit when I came to terms with what Ingrid Newkirk, the founder of PETA, meant when she said that animals are people. I was like yeah I get it, they are, in their own individual little weird way, they are.”

The nail firmly placed in the coffin of Gav’s carnivorous life, this vegan café owner had reached the point of no return. And as time went by, it was becoming acutely apparent that as a vegan, he had a “duty to contribute to creating a wider movement in that direction.” The way to do this, he conceived, was by making plant-powered food “delicious, convenient and accessible.”

The surge of veganism, its increasing availability on menus, and the number of new openings in 2017 is down to the information available. “There’s a much bigger pool of resources,” he says, “and with so much footage from camera phones, everyone can document their experiences and thoughts. We have this library of high quality, well-edited, fact-based information. Then there are also more retailers: Mildred’s, for a start, the food is amazing, plus vegan stalls at markets like Kerb with good things going on.”

The Fields Beneath café transitioned to veganism over six months, after lots of dialogue with customers, “in the best, most gentle activist way I could,” says Gavin. “I always said that I would never put anything on the counter to replace an animal product unless it is as good or better and the same price or less.”

Gradually, he weaned the café off animal products, and then dairy. “We put in the change and haven’t looked back,” he says. “We are busier, our food is better; our chefs are to thank for this.”

Of Gavin’s ten staff, half are vegan. Most of his customers are not, but he is hoping that his café will act as a satellite, a place for people to chat about their experiences and exposure to veganism over a tofu-burrito and an oat-milk latte. “I’m not here to turn people vegan but if I’ve told them a couple of bits, they’ll go off and hopefully someone else will do the same. Then eventually they’ll decide to transition and eventually, be an activist,” he jokes, glaring sincerity behind his smile.

“In my experience having a lovely chat, discussing why I have done what I have done and what I have read is way more effective that telling people to become vegan,” he says. “There’s this thing called vegan amnesia,” he says, “it’s that ‘shame on you!’ mentality that some vegans have and some people anticipate from vegans. To which I’m like ‘excuse me mate, a few years ago you were chowing down on Big Macs everyday, so shame on you then?’ There’s no need for the shame game, every vegan was “the biggest meat eater ever” at one point or another,” says Gavin.

Despite his desire for more people to become vegan themselves, Gav maintains that nothing to do with being on a moral high ground.

His focus is therefore his shop, hosting events and roasting up a seriously mean throthy coffee. It’s living, breathing proof that transforming a dairy-delight into a plant-powered haven is financially feasible and more than possible.

So feasible in fact that Gav is currently looking to open a new, larger place in Camden. “We’re bursting at the seams here, Camden is the dream, a new space up from Mornington Crescent the ideal.”

The good-value £5 salad bowls change weekly and might include layers of toasted quinoa, al dente kale, sweet red cabbage, chunky-cut tomatoes, generous slices of creamy avocado and a smattering of black nigella seeds. Or try a marinated tofu burrito, with broad beans and cucumber, or even a Vietnamese baguette banh mih packed with maple-baked tofu, sriracha mayo, spinach and beetroot.

But our #1 fave? A superb Mekong Mouthful burger, its Thai sweet potato patty slathered in spicy peanut sauce, the sturdy sesame bun smeared on both sides with coriander mayo, pickled ginger and red chill adding texture and heat. A true vegan classic – and a snip at just £6.

The Fields Beneath is open daily until about 4pm at 52a Prince of Wales Rd NW5. Follow them @fieldsbeneath. Into all things vegan? Pick up the new issue of our sister title Gasholder, or follow our World Vegan Month coverage starting with this interview with two brand new vegans here .