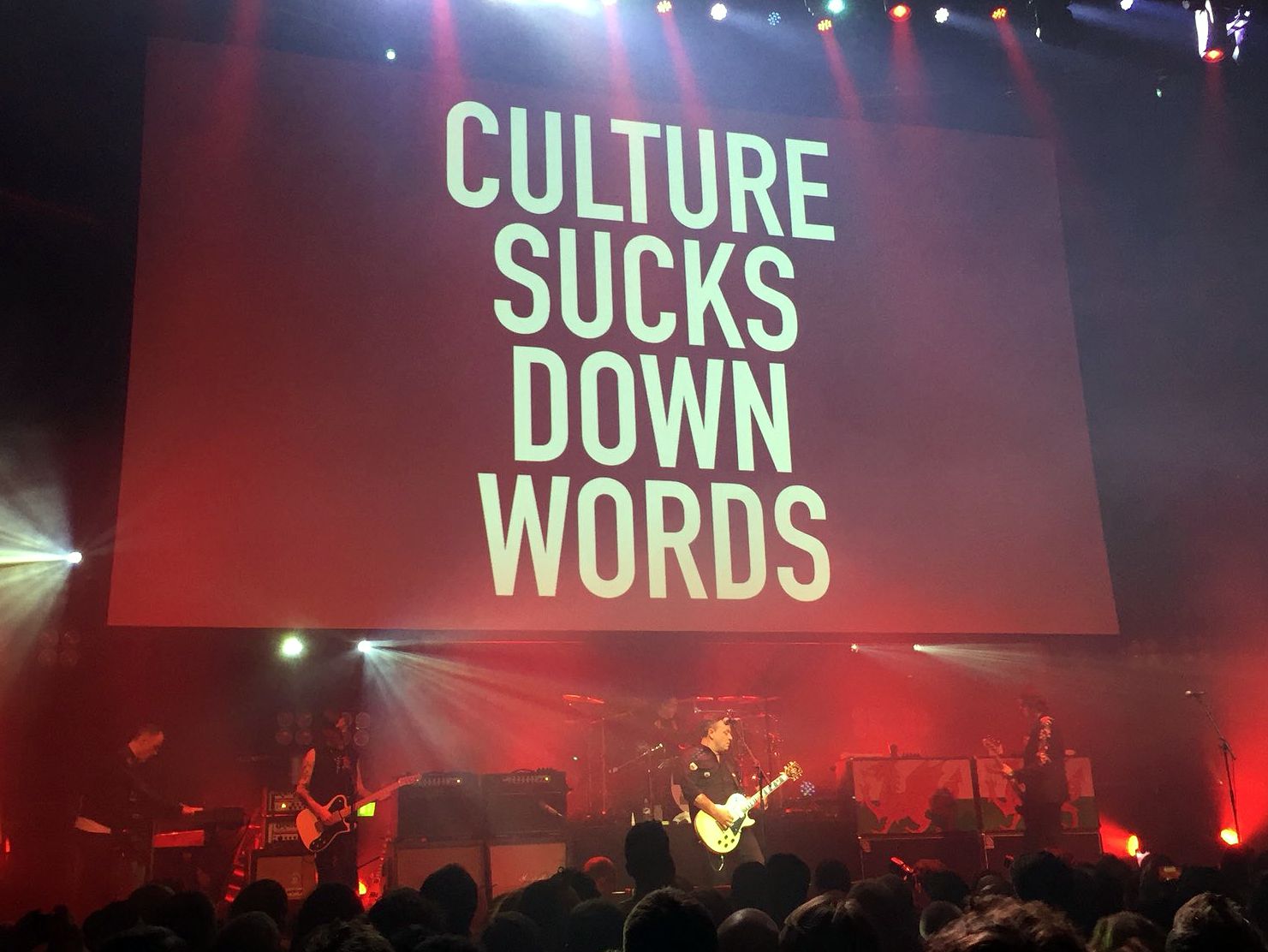 1991, The Marquee, Charing Cross Road. A teenage boy watches a band he doesn’t like as much as he thinks he should. At the end of the eardrum-bothering set a clutch of 7″ singles are hurled into the crowd. He eagerly grabs one: it’s You Love Us, a single-sided test pressing on the Manics’ tiny but influential Heavenly Recordings. Within weeks they’re signed to Columbia Records – and their run of Top 40 hits begins.

Over the next decade, however, this teenager sucks it all up: gatefold LPs, coloured vinyl, signed copies, orchestral remixes.

And yet, with time passing, I’d forgotten quite how much I’d grown up with the pioneering trio until catching them at The Roundhouse this week. First things first: You Love Us still wields its peculiar shouty magic, a symbiosis between band and audience long devoid of any irony.

The show at Camden’s loveliest music venue, to celebrate their Q Magazine ‘Inspiration’ Award, is a fairly intimate one for the Welsh band. It’s a welcome reminder, melodies aside, of how powerful the Manics’ lyrics are, exemplified by key song quotes that flash up on the screen behind the stage – each instigating cheers from hardcore fans familiar with very line.

The opener – dominated by the famous line ‘Culture Sucks Down Words’, the stage bathed in red light – is arguably the band’s greatest single Motorcycle Emptiness. It was their biggest hit prior to the sad and still unexplained disappearance of lyricist and rhythm guitarist Richey Edwards.

Just over an hour later, the final track is another masterpiece, A Design For Life, whose first line ‘Libraries Gave Us Power’ takes on even more potency projected in big letters. And inevitably the audience goes on to belt out every word of the chorus: ‘We only want to get drunk.’ In 2017 doesn’t its themes – class conflict, privilege, the problem of identity – feel more relevant than ever?

In between these mighty book-ends, all sung with James Dean Bradfield’s usual aplomb (despite an admission that he’s poorly tonight) lie a rollcall of other gems.

Some give me instant nostalgic goosebumps – the muscular Everything Must Go, the brassy Kevin Carter, the monumentally spine-tingling No Surface All Feeling – while others take longer to remind me of their anthemic status: the catchy You Stole The Sun From My Heart, epic 1998 #1 If You Tolerate This, the cascading Tsunami (apposite slogan? Inhale The Anxiety) and the underrated A Song For Departure (from their 2004 album Lifeblood, so good I’ve been playing it ever since).

A couple of tracks towards the end – especially 2013’s Show Me The Wonder – seem less well known to the crowd and the energy in the room dips a little (or so it seems from our bird’s-eye view upstairs): but Ocean Spray is a revelation, its end-of-the-night trumpet solo unbearably haunting when you realise the song is about Bradfield’s dying mother.

But there’s only one song that can send the audience into the warm October evening. Altogether now: Libraries Gave Us Power!

The moment’s even more poignant as Nicky Wire reminds us that the promo video (above) was filmed 21 years ago in the then-dilapidated Roundhouse. The more things change, the more they stay the same.

This is box title
Read about Manic Street Preachers on their official website here.