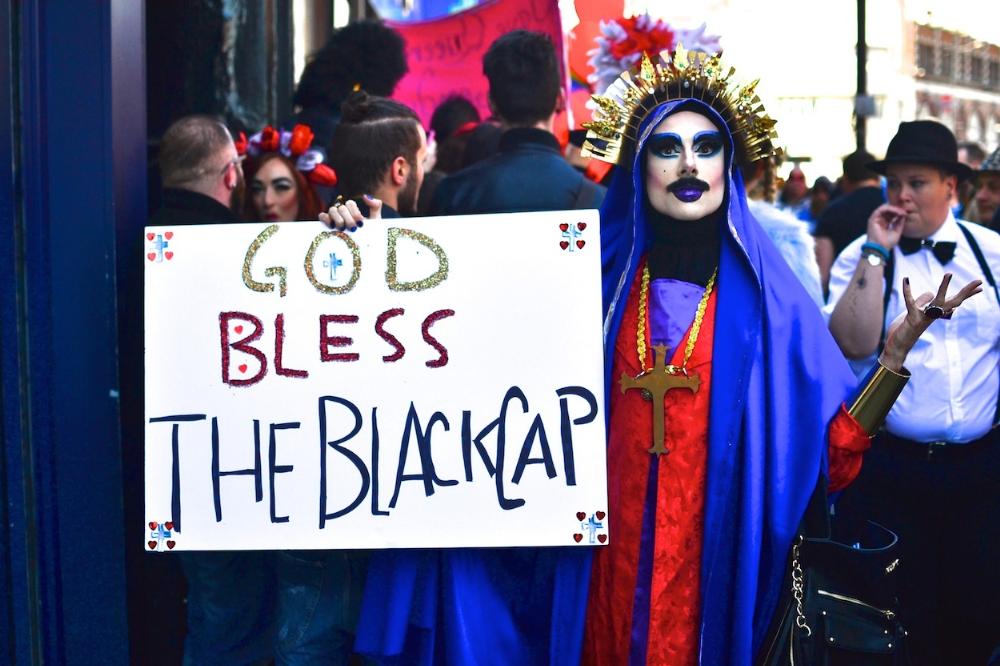 Let’s pop back to Camden in the 1980s. Alex Green, an 18-year-old Yorkshire lad donning a mop of bleach blonde hair, a big bag o’ homo-feelings, and a desire to find his way in London, steps foot in the Black Cap.

This was the first gay bar he visited – a familiar story for many London queers since the 1960s – and soon became his home. “It was my local, where I found my feet and where my queer family lived,” he says.

When the Black Cap infamously closed down a couple of years ago, despite gaining a Community Asset Value status, he was, in his own words, “having none of it.”

Alex, a singer and performer, positioned himself at the forefront of the well-publicised fight to save the Black Cap. This began (and continues) with weekly vigils, demonstrations and sing-alongs held outside the pub under the conviction that “if we can’t perform inside the venue, then we will do so outside,” he says.

Find out more about video ads for your business
Over the last two years, the Foundation have continued to pump energy, time and resources into the project, bent on transforming the gorgeous gabled building into the LBGT+ sanctuary it once was.

The efforts of the activists have been spurred on by the slaying of queer spaces across the Capital. The seemingly unyielding requirement that every inch of London ooze profit directly led to the ignorance and eradication of vital community spaces for minority groups.

Media coverage grew, supporters flocked under the banner #WeAreBlackCap and the Mayor of London vowed to halt the “shocking” decline in queer spaces, through measures like instating Amy Lamé as Night Czar with a special mandate to safeguard LGBT+ venues.

“Camdeners in particular have been really important to our campaign,” says Alex, “they don’t want another homogenised, beige place in which they can sip on a glass of wine, in a low-lit Scandi-designed, bar-cum-coffee shop,” he says, adding that the council doesn’t want this either. “They are aware of the need for Camden to be full of independents, diversity and colourful characters, this is what has always made Camden special.”

“We have fended off three potential lease-holders,” says Alex, amongst them, the Breakfast Club and a swanky wine bar.

“The owner obviously thought we would disappear after a few months, that we would loose interest and move on,” Alex says. The group persisted, eventually forcing the landlord to the negotiating table.

The two sides have been holding talks, mediated by the council, since December. The Black Cap Foundation want to turn the historic venue into a financially viable cabaret and performance space. The owner, in tune with the economic climate of London, would like to turn the building into the most profitable space possible, with apartments at the top and a bar below.

According to Alex, “the landlord has been coming to the table with a ‘this is my building mentality,’ while our response has always been, ‘no, this is ours’.” There have been four meetings over the last seven months.

“It was during the third meeting when the owner blew us away with his decision to blonk down an A3 portfolio of his elaborate plan to build a surreal, flying saucer like monstrosity, behind the gorgeous arch of the Cap,” says Alex.

“It really took us by surprise,” he continued, “I don’t know why it is so difficult. We have the sui generis that this has to be a queer performance space. The owner brought this building like this and he doesn’t have the planning permission to turn it into flats. The community is rallying behind us, as is the mayor,” he says, “why has the landlord been dragging his heels for so long?”

Progress came almost a month ago during their last meeting when the leaseholder eventually agreed to run the Cap as an “LGBTQ+ venue with cabaret performance at its heart.” The activists are taking this as a victory but are still finding the “half-hearted attempts” of the owner exhausting.

“They have never put in any leg-work to prove that no one will want to run an LGBT+ venue in Camden. They came with the theory that a gay bar is an unviable option and stuck with this assumption, doing nothing to prove otherwise,” says Alex.

So far, the Black Cap Foundation have received five serious potential offers from pub operators willing to return the venue to its former fabulous form. “We realise that this has to be a functioning business; of course we want it to thrive. Fifteen years ago, the Black Cap was the highest turnover pub in London. We want to return to its former glory,” he says.

As the weeks go by, it is looking increasingly likely that the groups’ unwavering persistence will pay off. “This would be the biggest turnaround in British pub history,” says Alex, “but this isn’t just about the pub, it is what this space represents. It is a fight for visibility, equality and justice.”

This is box title
The Foundation is looking for experienced pubs operators to turn the Black Cap into an LGBT+ venue with cabaret and performance at its heart. If you know anyone who would be up to task, drop Alex an email: alex@loudandqueerly.com. More info here.