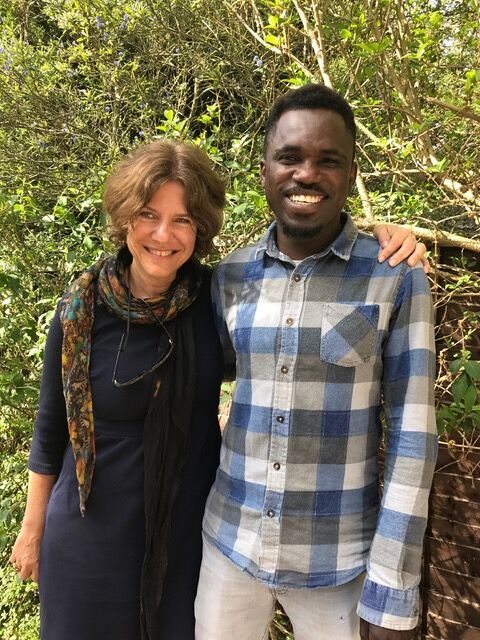 The brainchild of long-term Kentish Town resident Anneke Elwes, HostNation is a pragmatic response to one of the most pressing issues facing refugees once they have persevered through the arduous task of seeking asylum in the UK – loneliness.

Frequently denied the right to work, the opportunity to fully participate and the ability to find companionship, its USP is apparently simple: by creating an online platform, the organisation is hoping to provide a stepping stone from which Londoners and refugees can meet, hang out, grab a bite to eat and do all that nice matey stuff.

How did HostNation come to be? I ran a market research company for years and did a lot of volunteering with refugees on the side. I then decided to go back to university at SOAS, where I studied for a masters in the social anthropology of development. My dissertation was focused on the concept of ‘humanitarianism at home’ and was all about people who host, in some way, the refugee “other” in the UK.

Through this I became interested in initiatives for the people who are already here rather than getting more people here, because there are enormous numbers of people here who need our help. I started to think about what I could do at home, and one of the simplest ideas, and also the thing that was most needed, was friendship.

You run another organisation called Camden City of Sanctuary? Yes, a grassroots organisation for those who want to get together and help refugees and asylum seekers in the community. The problem with this was that there really aren’t many refugees or asylum seekers in the borough of Camden. There are only around half a dozen Syrian families the council has taken responsibility for and resettled here. Most asylum seekers are housed in really horrible accommodation in zones 5, 6, 7 so they are not in Kentish Town or other central zones.

So I was getting all of these local people coming to me through this organisation, all sympathetic to refugees and wanting to help but having no way of connecting to the people. I decided that the best way to facilitate this connection was by using technology, and giving the whole process of befriending a lighter touch.

Are there many other befriending charities? I was trained to be a befriender for an unaccompanied asylum seeker through Freedom from Torture, Helen Bamber’s organisation. Like many other befriending schemes, it was axed. There seems to be a scattering of them around the country, more so in the north of England, and they tend to be small scale, a bit piecemeal, existing through a particular faith community.

So what are you doing differently? We use the same technology as online dating websites. I have to be a bit careful with this analogy because obviously I don’t want anyone getting the wrong idea and thinking that we are suggesting romantic relationships, but the idea is the same. You get profile information on both groups and use the technology to work out who should be put in contact. The software exists but it has never really been applied to refugee befriending before.

How are local residents responding to this project? Streams of neighbours have heard about what I am doing and have offered to help. I do think that Kentish Town is rather amazing. Since I got involved in this six months ago, I have met so many people setting up similar technology-based schemes and projects to help refugees and asylum seekers – and they all seem to have NW5 connections. I often think what a wonderful ethos of grassroots humanitarianism and creative start-up energy this area has. Take, for example, Kentish Town’s Iliana Bird, the DJ and partner of Noel Fielding, who founded Help For Refugees, an organisation that carries out essential work in Calais, Greece and the UK.

Who has registered with HostNation so far? 150 volunteers and rising. We are currently in the process of registering, checking, gathering references and calling each person for a chat as well. We will be opening registration from refugees this month. What is really interesting is that out of these volunteers, 140 of them are women, and of those they are mostly in their 20s and 30s.

There is this amazing activism amongst this generation of people. They were, after all, students when all this news was coming in about refugees and boats arriving, while politicians were just behaving so badly in response. There was almost this humanitarian imperative to go out and help. People don’t just want to write a cheque, they want to make actual, tangible connections. I call this putting the human back in humanitarianism.

Do you hope that grassroots initiatives like yours will contribute to encouraging our government to allow more asylum seekers to settle here? That’s not what HostNation is about. So much of the emphasis in this sector is placed on advocacy and attempting to change government policy. Obviously it’s important that we have a healthy approach to asylum; it is part of who we are as a country. My main issue is what do we do with people when they come here.

The home office keeps people who have often suffered incredible trauma waiting for a decade before they make a decision. There is an almost knee-jerk refusal of initial asylum claims, so they must then endure the laborious, labyrinthine process of appealing. This ordeal is carried out through a system that is completely dysfunctional and underfunded.

I know that I am not able to fix the Home Office. I can’t reduce the time it takes to be able to seek asylum from ten years to six months. I mean I wish I could, but I don’t have that kind of power. I just want to do something that is a little more practical by connecting people who have got friendship to offer with people who don’t have any friends. I want to stick to that because I think the idea is simple and yet effective.

This is box title
Find out more here, head here to donate.