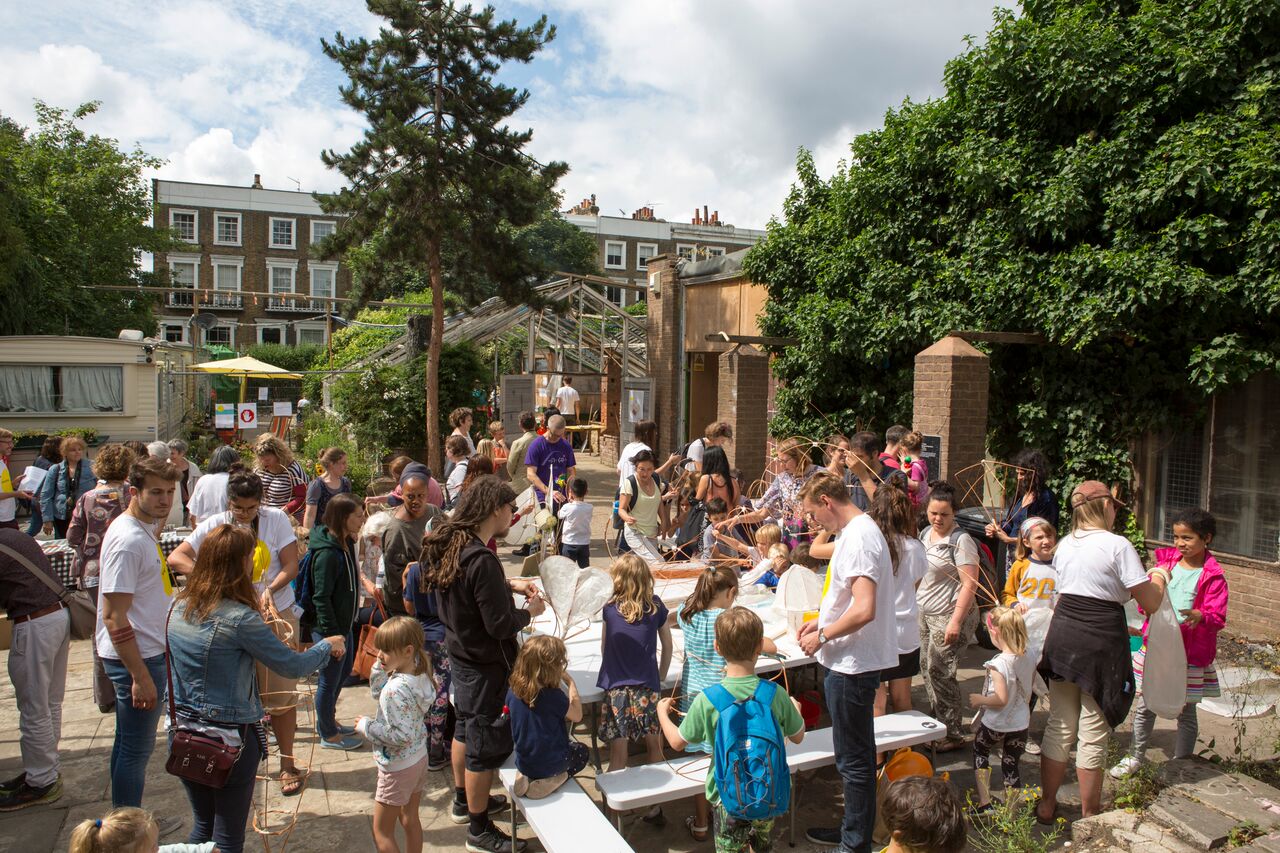 How one couple transformed Rochester Square

Or rather, the trials of creating a viable artistic space for all the community in the heart of Camden

Last year, a half acre of derelict land a few minutes’ walk from Camden Road station was purchased by a local couple, Francesca Anfossi and Eric Wragge. Once a plant nursery and theatrical prop warehouse, it has, over the last few decades, proved fertile ground for a series of squatting communities; each claiming the land and attempting to transform it into their own vision of, as one group called it, “a free flowing creative community hub.”

The most recent inhabitants consisted of thirty or so people living in what they had entitled Rochester Square Community Garden. They attempted to live self-sustainably, grew large amounts of food and tried to run workshops, a bookshop, a healing zone and a film screening every Thursday.

Francesca and Eric have a similar vision for the space, equally ambitious and born out of a desire to transform this square into a community space for recreation and artistic collaboration. The real difference lies in the way the couple – one of whom is an artist, the other in finance – acquired the space. They decided to purchase the spot and initiate their project from there.

Since they moved here last June, they have set up a ceramics studio with nine kilns, three wheels and 15 artists in situ. It offers cheap rates for artists and workshops for novices; spaces are lacking in London according to Francesca, who got into the craft ten years ago.

The pair recently hosted an open weekend in support of the Roundhouse’s Youth Creative project. For the event they built a pizza-oven made of reconstituted clay, served food donated by local restaurants, had various interactive art installations, film screenings, family-friendly workshops, life drawing classes and live music. “Everything was free, it was all run on donations and the support of the local community,” says Francesca.

Similar events are in the offing and the couple will host communal dinners on the first Saturday of each month. “Everyone is invited, but it’s mainly for people interested in the future of the square.”

“We’ve always really liked strange places,” says Francesca, who currently lives with Eric and their two children in a home that they renovated from a shop. “Once we finished that project we said that we would never do anything like it again and now look at us.” Renovating spaces is, she says, “like having a child, you say ‘never again’ and then you just do it. It’s the same combination of pain and pleasure.”

Their decision to create an artistic space here happened quite accidentally. “We were just very curious,” she says, “we visited a few years ago, and talked to the squatters about the space.” After a little more digging, they contacted the owner, wondering how much it would be. They then held several discussions with the council and local residents so as to ensure that no one else was looking to buy or form a coalition to purchase the land. “We didn’t want to step on other people’s toes,” she says. But with no-one interested, “we just thought, why not, let’s try it.”

The Rochester Square website documents the arduous task that cleaning and clearing the space proved to be: the removal of asbestos, Japanese knotweed, 133 tonnes of debris, blocked drains, nine gas cylinders and a sizeable family of rats. The squatting communities inhabiting the derelict space were, according to the current owners and some local residents, not keeping the place in good shape.

“They did quite a good job in parts, but they built way too much,” says Francesca. What is now the ceramics workshop contained lots of different structures and compartments to create rooms and different floors; although poorly built and riddled with asbestos, the vision was there. “They also had some beautiful planters, removing them was sad but there is Japanese knotweed that need to treated properly,” she says.

“There was also a lot of rubbish,” says Francesca, “nobody really talks about this but the amount we had to throw away was incredible. It wasn’t this kind of self-sustaining community that they were trying to sell themselves for.” Since their take over of the space, months of work ensued for Francesca, Eric and their teams of volunteers.

For Francesca, removing the squatting community was a particularly sad part of this process. “We tried to be very human about it,” she says, “Eric came in by himself, talked to them, introduced himself as the new owner. They were surprised and very warm because they have never had never experienced this treatment from an owner before.”

Rochester Square is currently in transition, looking to become a space powered by and for the community. There is no set direction at this stage and the owners want to create the space through dialogue and engagement with locals and artists for what it can become. All ideas are welcome, they maintain.

“We knew we were going to have this temporary stage with this project so we thought some sort of combination with the squatters could be interesting. Obviously some of their ideological ideas and the basic foundations of what they were hoping to do are similar to ours.”

But after several attempts at negotiating with the group, the couple found that the squatters were too many, with too many disparate opinions, so went through with a proper eviction through the courts. A year since their eviction, a handful of squatters seem to be warming to the couple’s project, with some attending the opening weekend.

Others were less so, concerned by the police presence at the event, which Francesca says was completely voluntary: “They just decided to come, they even did some life drawing.” In general the community has responded well. “We have had positive support. People are happy the area is quieter, cleaner and more calm.”

For Francesca, most important is that it unites locals. “I come from Italy where squares are there to connect people, not separate them,” she says. “I always thought, what a shame that there is this slab of land that divides this council estate from these houses,” she says, gesturing to Inwood Court, the six-storey council estate on our right, and the ivy-covered houses situated to our left.

Francesca and Eric share a common vision with the squatting communities, that the space and project is an open, tranquil and creative environment to create and relax in. “This must be a socially engaging space,” she says. “Involving and connecting people, and animating objects, has always been an important part of my art.”