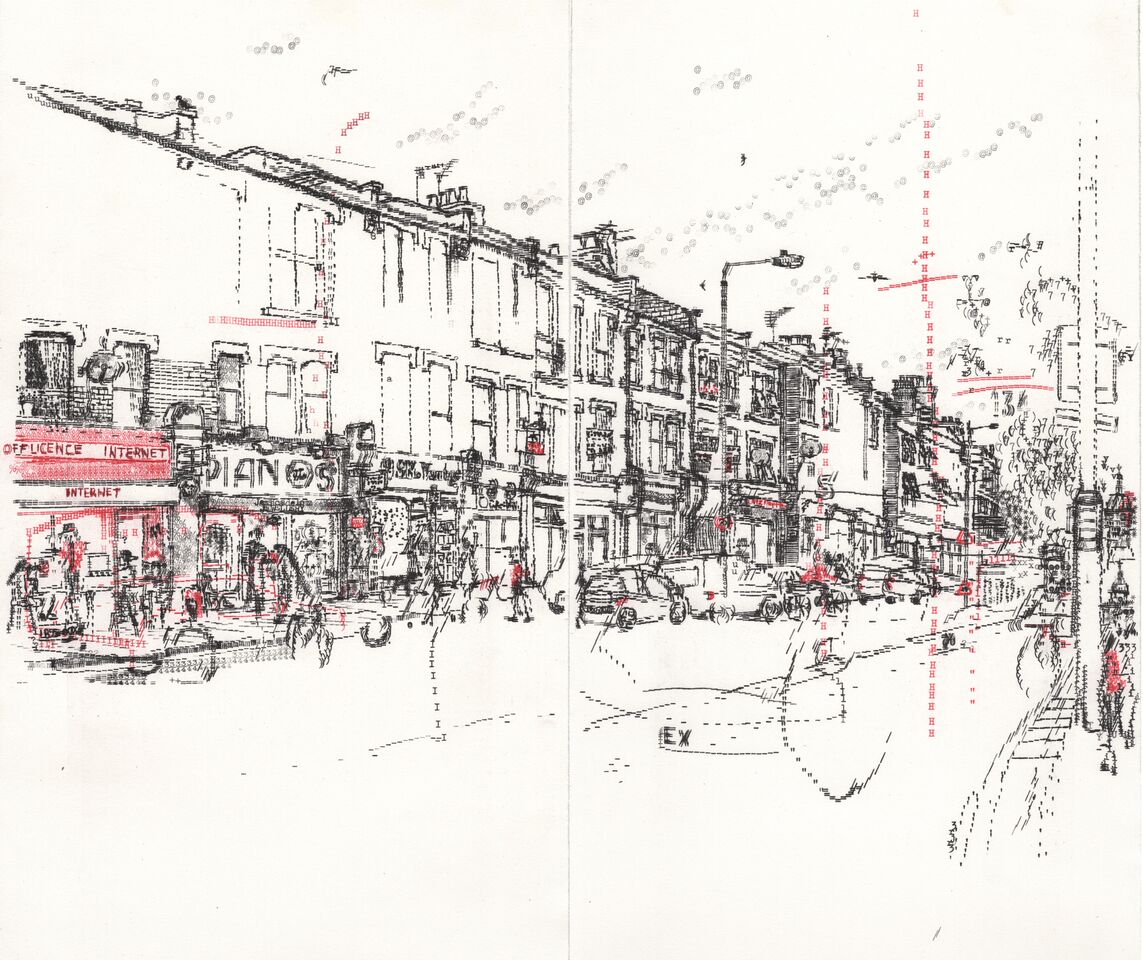 Keira Rathbone has been stooped over a little plastic stool outside Jessica de Lotz’s Jewellery shop on Fortess Road for the past couple of weeks, using her typewriter to draw the cover image on the latest issue of Kentishtowner (Issue 49).

She goes from gazing up at her subject – the store and the parade of shops on either side – to determinedly and repeatedly prodding away at the same character in order to recreate the street scene, including the shops, passing traffic, cyclists, people and birds that have darted past in the last few days. “I’ve been walking up and down the road a lot too,” she says, “trying to find the perfect composition and angle. People must be thinking what is she doing out there?”

The unmistakable soundtrack of a typist in full-flow is made indistinguishable by the consuming swoosh of passing buses and constant thrum of cars. Members of the public stop by to offer advice, to query where Keira went to art school, who she works for and where she gets her inspiration from. An artist could easily be distracted by all this commotion – but this is why Keira does what she does.

“A lot of what I do is about the people I meet and the exchanges I have with them on the street. Loads of people have been coming to see me, of all ages,” she says, informing her about their career as a typist and how nostalgic it is to see one being used again.

“I get lots of kids as well. Most of them don’t know what a typewriter is, but I really enjoy letting them work it out because there is such a connection to what they are used to these days,” she says. “It is such an engaging and tactile machine as you can see a significant part of it in action, unlike computers and printers for which you have to rely on something that you don’t necessarily understand.”

I look across the road to the transient scene that Kiera is reproducing. I wonder how she manages to get that level of perspective and bring that much animation with a tool that seems so clunky and archaic, in comparison to the iPhone clasped in my left hand at least. How does she avoid making mistakes without the safety net of an undo button or a backspace? “This is one of the reasons I like typing actually,” she says, “with each mark you can’t erase it so there is a trail of everywhere I’ve been to get to that end point.”

This hasn’t been the case for Keira, who has been an artist for 14 years. “Early on in my career, I used to think a bit more like that but I’ve never really been particularly into it being an exact representation,” she says, “it is more about projecting the feel of the place, so capturing the vibe and the life that flows around it.”

Keira unrolls the first half of her Fortess Road piece, stored in a cylinder next to her stool and points out the silhouettes of people who have passed through and the buses that swung by. As I look at the work and then to her red and black printing ribbon providing a two colour palette, I wonder what elaborate graphic design tool could allow me to produce a scene with the same degree of atmosphere and astute accuracy.

This parade of shops feels like a natural one for Keira. “I’ve just fallen in love with this whole bit here, this selection of stores, no chains,” she says. “I think when a place has got a soul, it comes out. I am just feeding off it, That is all I am doing.” She thinks it is important to document places that aren’t too developed. When she comes across modern, glass buildings, her “instinct doesn’t want to draw it.”

“I like to go where the characters are and being in alive situations,” she says, the more time she spend in environments with lots of characters and potential for integration, the more she realised that these areas are what inspires her. “All I’m doing is soaking up a place and a time and recording a collection of moments because obviously time is constantly moving and I feel like it’s important to mark the time that I was here.”

The reason Keira, who lives in Chiswick, was initially brought to this part of town was through her friend, acclaimed jeweller Jessica de Lotz. The pair instantly hit it off when they met seven years ago in a shop in Angel where both were displaying work.

They have collaborated in the past but their latest project came about because Jessica wanted to introduce her customers, who have been streaming in and out of her Fortess Road workshop-cum-store since it opened last year, to the concept that her space is for more than just jewellery. “I want it to become an engaging place for interesting pop-ups and launches. Who better to kick-start with than Keira?” she says.

There are great parallels between the two artists’ work. Most notably, says Jessica, “both of us create process-led bespoke items that require time and consideration. We’re very hands on with every element of our work so when someone buys an item, they really do take a little piece of us with them.”

This is box title
The launch of Keira and Jessica’s collaboration at JdL Jewellery is Sat 29th July, 11am-6pm. Limited edition prints of the our Fortess Road current August cover will be available to buy unframed. More info here. Find the shop at 49 Fortess Rd, NW5, open daily 1030-630pm.