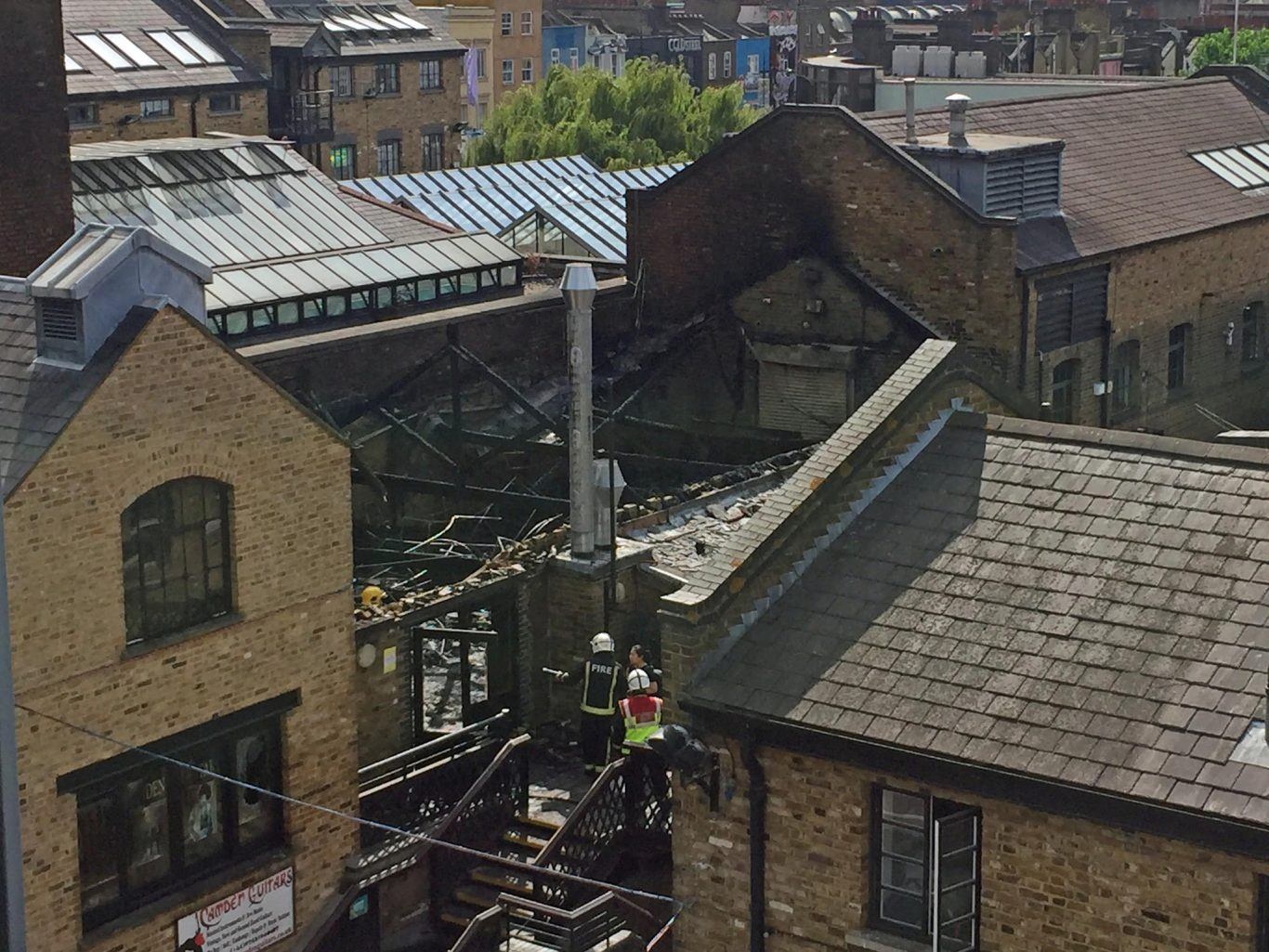 Inferno videos and TV interviews with distraught traders might get the clicks, but there’s a better story to be told about this week’s blaze

The most explosive thing about Sunday night’s Camden Market fire was in fact the outbreak of frenzied reporting of a red hot story.

Rolling news channels, eye-witness tweeters and frontpage headline writers around the world revelled in the dramatic footage of flames leaping over this famous landmark.

Such a disaster fits this summer’s depressing news agenda perfectly, containing key elements: a ‘huge’ fire at one of London’s most visited, consistently photographed and globally recognisable destinations.
As someone who lives nearby – and works inside – this historic complex of Victorian stables, warehouses and railway arches, home to hundreds of independently run craft, fashion and food stalls for the last 40 years, I headed in on Monday morning dreading what scenes I might find.

“Fire guts Camden Market” and “Camden Market goes up in smoke” screamed the links on Facebook, while messages buzzed in from far flung US and Australian friends, who’d been glued – once again – to their TVs for another apparent dose of tragedy from London, summer 2017.

Only the story here on the ground doesn’t quite fit the narrative.

To make it clear, 36 traders have lost not only their place of business, but in many cases their complete stock of unique, personally hand-crafted products. That is devastating for them. Happily, the support they’ve had from the community in and around the Market has been nothing short of phenomenal, and has hopefully made a tragic situation slightly easier to bear. Heart-warming stories of generosity abound, if you care to listen.

Apparently, insurance is difficult to obtain since the Market halls are public spaces, so the financial as well as emotional impact of this event is potentially very serious for some people. But what you won’t get from the news reports is how mercifully contained this fire actually was.

Looking out of our office window, the devastated hall is roofless and almost completely razed. But if you wander into the main Market Hall just next door, it’s business as usual. A fire wall and safety shutters did their job, and other than some heat damage (see melted pillow below), traders in the immediate vicinity are pretty much unaffected.

In these difficult post-Grenfell days, the skilled actions of the fire service and the success of safety systems in place during this accident are a truly beautiful thing to behold.

By Tuesday morning, the daily throng of this place was almost back to normal, scaffolding already up on the affected building to assess structural damage, life getting on with itself in busy Camden, as always.

With well over 1000 traders operating across the area’s seven different Market sites, this is a miraculously low-impact event considering the images of the flames on the night, and the tone of those sizzling reports.

“The sensationalist ‘Camden Market destroyed’ comments being flung around are by people and publications with absolutely no understating of this area,” says local marketing expert Jackie Clode-Dickens, who has set up a crowdfunding appeal to raise money for traders suffering from uninsured and irreplaceable stock.

“As devastating as it is for those who’ve lost everything, as a percentage of the overall space here, the fire touched a very small fraction, probably less than 3%,” she says.

Off-the-cuff comments online, such as the inevitable cries that it’s all a shadowy plan to clear the Market and ‘develop luxury flats’, show an embarrassing ignorance of the layout of the site, and also how attractive the preservation and promotion of one of London’s top five tourist attractions actually might be, yes, even to developers.

Where things get really loopy is the conspiracy theorists, posting videos obsessing about a cover-up as part of an elite/government plan. We also wonder if writing potentially libellous comments under stories on the Evening Standard or Daily Mail websites is the best use of anyone’s time, no matter how convinced you might be that the Market’s owners are personally running around at night torching their own investment.

Cutting through all the noise is difficult if you are not here, but we can honestly report that being in Camden this week has really showcased all that’s great about this historic hub of culture and commerce.

Many have rightly called for people to come and support all the traders this week, but there’s a bigger story here too. Far too many Londoners, and much of the press, persistently malign Camden and its Market as tacky, while simultaneously mauling those who wish to modernise it.

Despite setbacks like this week’s fire, there is much to celebrate about the spirit in this world-renowned place – and the direction in which it is heading. We suggest everyone come and see for themselves.

“Camden Market is so much more than its historic bricks and mortar,” says Jackie. “It’s a living, breathing thing made up of people, personalities, experiences and community. As long as the Camden Family remains intact, if a little shaken this week, it will continue to lead the way as one of the world’s most important cultural destinations for decades to come.”

Camden Market is open seven days a week. The downstairs of the affected building should reopen in the next few weeks, hopefully signalling the return of the likes of Books Iconica, Kim’s Vietnamese Hut and Cookies and Scream. All upstairs traders suffering from the fire will be offered a new location on site by next week, however unfortunately some of them will have nothing surviving to sell. Support them to rebuild financially via the Justgiving page.