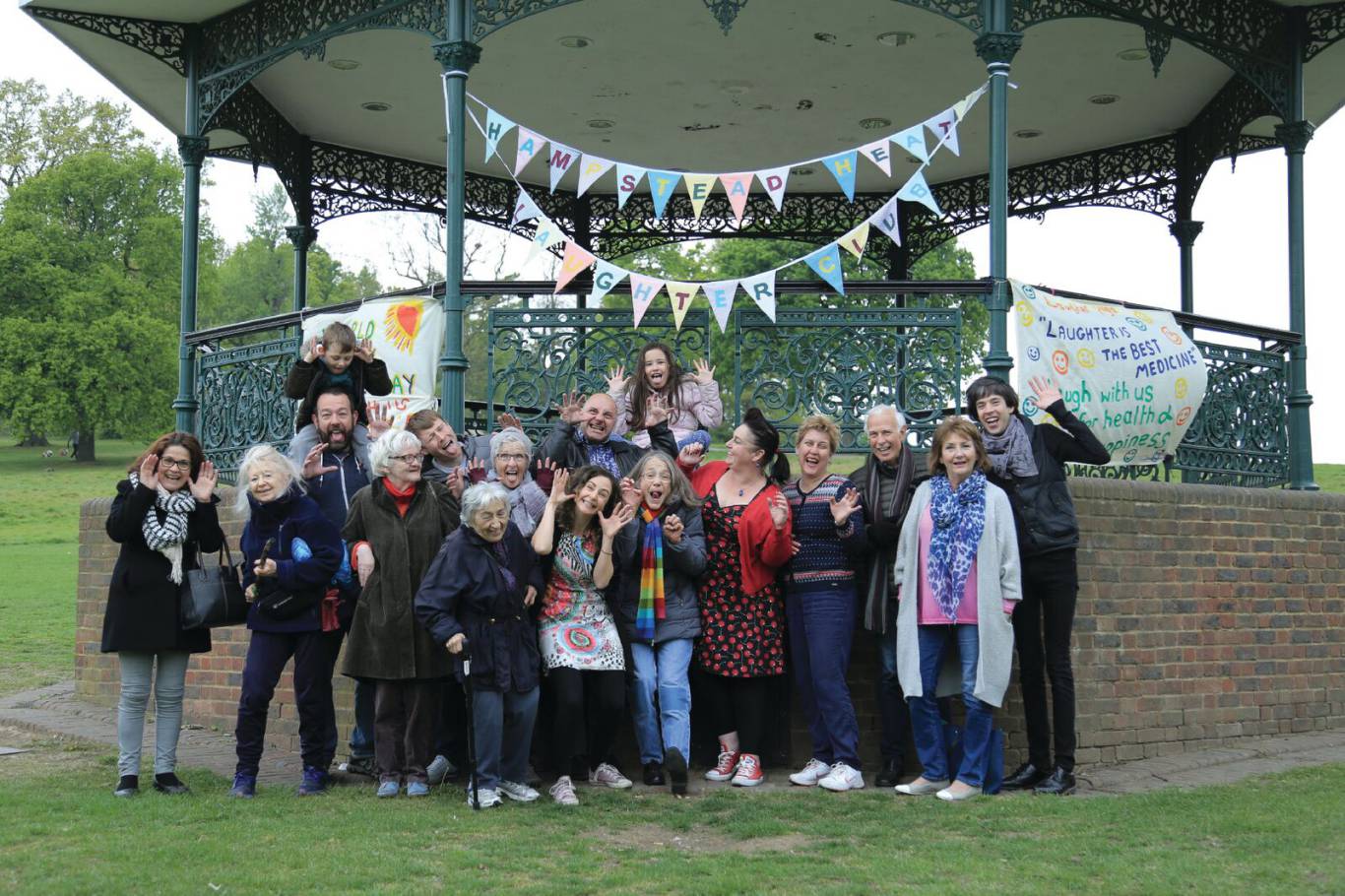 Brits usually prefer to have sloshed back a couple of glasses of plonk before we’re inclined to interacting without awkward social boundaries. The idea of spending a dangerously sober Sunday morning holding hands with strangers, prancing about and faking belly laughs in their faces is probably not the nation’s most immediate idea of a relaxing time.

Yet if you can suspend your ingrained cultural aversion to forced fun, I promise it’s very easy – and rewarding – to join the growing ranks of the laughter yogis. “I saw people practising laughter yoga on TV four years ago and thought it looked fantastic,” says local Catherine Keshishian, who today helps run the Hampstead Heath-based branch of this global movement, and invited us to come and give it a go.

“I was so excited to find a club literally up the road from my home and immediately loved it. I found I couldn’t stop laughing for the rest of the day. It opened my eyes to a more playful and positive way to look at the world.”

The idea behind this group practice is simple. Laughing has proven health benefits, both physical and mental. Intriguingly, these are the same whether you pretend to have a little chuckle, or are consumed with unstoppable giggles. Our bodies can’t tell the fake laughs from the real ones. And of course once you begin, it’s incredibly easy to slip from unconvincing forced titters into full-throttle contagious belly laughs.

“Having worked in public health for years, I was really interested in the medical evidence for the benefits of laughter,” says Catherine. “When you laugh you release endorphins – happy hormones – and reduce stress levels, something that’s so important in today’s hectic world.” So, with my personal stress-o-meter peaking in the face of getting kids ready for their Sunday swimming lessons, what better time to go test this out?

We find Catherine, plus founder of the group Mary Adshed, and a clutch of regulars at Parliament Hill bandstand, their spot for the last seven years. I’m immediately very glad to have brought the kids, as it’s soon apparent the proceedings will have more than a touch of the children’s party about them. We’re asked to run around and chortle to each other, which everyone does very enthusiastically.

Soon we’re playing physical games, like passing a hoola-hoop from person-to-person without letting go of each other’s hands. Yes, it probably sounds excruciating, but in reality it’s invigorating. The forced guffaws, honks and cackles swiftly become the real deal. I’m struck at how nervous laughter, often our first defence in awkward social situations, can transform into the perfect ice-breaker. Once we’ve all expressed our inner pained chuckle, we’re able to go with the flow with a bunch of total strangers.

The kids take to it like ducks to water, of course. They know this shizz inside out. What’s nice is that here they are interacting on a level with the grown-ups, not just being watched by them from the sidelines (glass in hand). In fact it’s the adults, many of whom are senior citizens, who really seem to gain from the joys of remembering how to be utterly silly for an hour. You can feel the glow and release that comes from indulging in a bit of group frivolity.

“I think laughter is essential for human resilience and creativity,” says Mary, “and to engender peace and harmony between people. Most of us are spending far too much time in sympathetic mode, which is only meant to be for fight and flight situations. This prolonged stress impacts very negatively on us and is a major factor in disease. We are bombarded with bad news, and depression is on the increase. Laughter and play raise our spirits, energy and have profound positive effects on our body chemistry. In laughter yoga we choose to laugh, which is also very empowering.”

Invented in India by Dr. Madan Kataria, the yoga element is more about breathing than dropping into downward dog, so it’s not physically demanding, while offering some cardio work regardless. His requirement is that all classes are given for free worldwide, and there are even daily Skype sessions available with people chortling away at each other across continents. Meanwhile, back at the bandstand, we’re exclaiming the word ‘rhubarb’ in a variety of ways to each other as the session reaches a crescendo of hokey-cokey hilarity.

We’ve just spent an hour laughing for no reason, and everyone is feeling pretty great.“I love the fact that laughter yoga is about laughing with people, kindly and lovingly,” says an exhilarated Mary. “It’s just about being a human being, not about being clever or witty, and a great antidote to all the emphasis Western culture puts on our intellects.”I’m certainly feeling far better prepared for the rigours of swimming lesson logistics ahead. We wave goodbye to the beaming group, without having spoken to them, only giggled, held their hands and danced.

“Wandering up to the Heath on a Sunday morning to be greeted by friendly, smiling faces is something I cherish,” says Catherine. “We have regulars who have been coming for years – our oldest member is 88 – but there are always new people too, who’ve heard about the club or just walk past and join in. Everyone is welcome as it requires no skills and it’s suitable for all ages. Laughter IS the best medicine.”

This is box title
Hampstead Heath Laughter Club meets at 11am on the first Sunday of the month at Parliament Hill Bandstand. Free (donation to charity suggested). More info here.