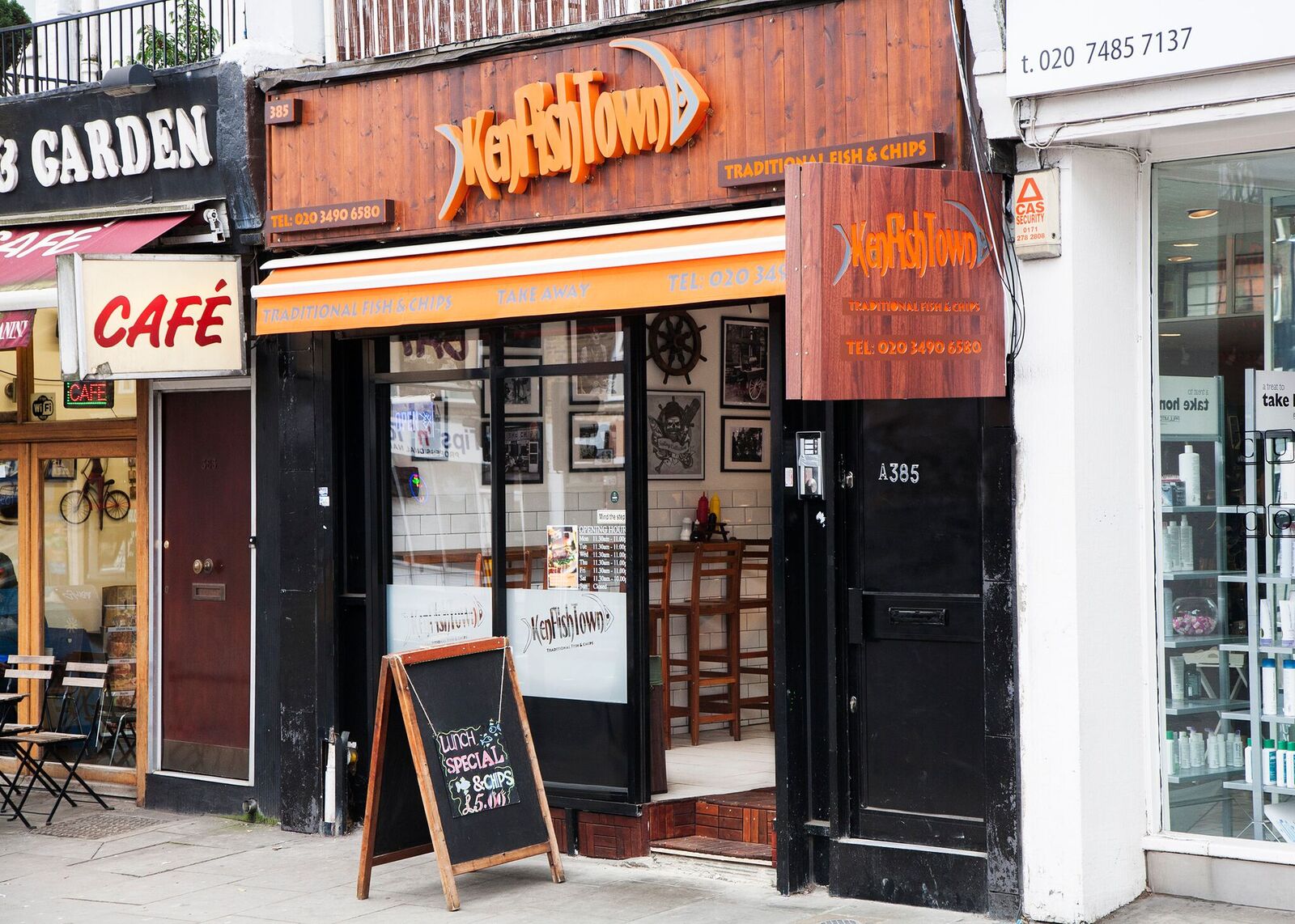 Today, 385 Kentish Town Road has the look of pretty much any unit in a slightly faded parade, where café and nail bar shop fronts are punctuated by beaten-up doors to flats above.

But in the late 1800s when this little strip was built, it was particularly well appointed, sitting between two already historic ancient pubs – The Assembly House across the road and Bull & Gate a few steps north – opposite the Midland Railway station and bang in the centre of a commercial district that offered shops stretching onwards up Highgate Road.

Back then, the shop was home to a branch of Albert Zwanziger’s bakery, which was immortalised by Sir John Betjeman in his famous ode to his memory of childhood tram rides, ‘Parliament Hill’.

When the Bon Marché was shuttered, when the feet were hot and tired,
Outside Charrington’s we waited, by the “Stop Here If Required”,
Launched aboard the shopping basket, sat precipitately down,
Rocked past Zwanziger the baker’s, and the terrace blackish brown,
And the curious Anglo-Norman parish church of Kentish Town.

The Bon Marché is now Sainsbury’s, while Charrington’s is generally believed to be a reference to the produce on sale at the coal merchants George Hickling & Co, then to be found on the corner of Regis Rd.

Ahead of the First World War, the Zwanziger family changed the name of the chain to Cordingley’s after a branch was attacked and trashed by an anti-German mob. It’s unclear from records if this attack took place in Kentish Town or elsewhere, but in the above photo from around 1914, it still bears the original name from Betjeman’s poem.

Later, the Camden History Society notes that the site was taken over for a short time by one Maurice Cohen, a pastry cook, but by the 1920s it had become a fish and chip shop, a deep fried heritage that is now heading towards a lineage of nearly 100 years.

Local folklore suggests that none other than The Beatles used to enjoy their newspaper-wrapped battered cod suppers here, during the period in the 60s when local author Hunter Davies was writing their biography. The Fab Four would regularly hang out at Hunter’s home in nearby Boscastle Road during this era, at the peak of their powers.

As his wife, the author Margaret Forster, stated in memoirs published before her death last year, it was nevertheless all quite domestic and groovy. “Paul came first, with Jane Asher, but for tea, not dinner… next came George and Pattie, but for an evening meal. George was intent on philosophical discussion, and not much interested in the food… I made the same [aubergine dish] for Ringo and Maureen, but it turned out they were the sort of vegetarians who didn’t like vegetables other than potatoes.”

A few years later, in another impressive local story with a global impact, a small room directly opposite the long-term chippy was where designer and academic Bill Moggridge came up with the original design for the laptop. We’d like to think he dropped in for some chips occasionally too.

The reasonably amusingly-monikered ‘First Place’ occupied the site back then, before a more recent brief incarnation as Danny’s. And now the puns are well-and-truly back, with latest owners KenFish Town playing on a riff on the name of the area (doesn’t someone else do that too?) while upstanding the building’s long traditions as a first rate local chippy. We wonder who, or what, will be responsible for its next brush with a spot of fame.