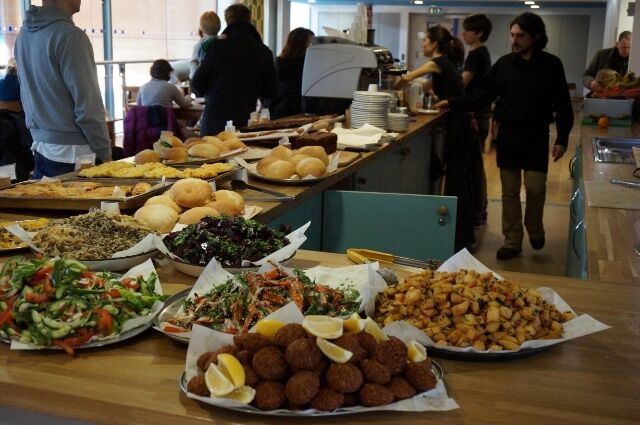 It’s encouraging that the Parliament Hill Lido café is back again after its life was cut short by previous owners deciding against the project. Better still is that it’s been taken over (as a pop-up initially) by indie cafe and falafel giants Hoxton Beach, who run similar outlets at London Fields Lido and Clissold Leisure Centre in Stoke Newington. As well as selling high quality falafel (natch), there’s artisan coffee, sandwiches, Middle Eastern salads and brownies. Open daily until 5pm, Parliament Hill Lido, NW3

While we’re on a weekend-mooch food tip, this charming Saturday excursion has been going a couple of years, but it’s taken us a while to appreciate its sheer quality. And now we’re hooked: the vegetable stalls are wide-ranging, the fish and meat varied, and the sourdough sellers a must. But it’s L’Ubriaco, the ‘Drunk Cheese’ guy from Borough market, who proved winningly knowledgeable and entertaining on our last visit: try a piece of the goat’s cheese matured with Traminer (grape must) alondgside a glass of something from the Natural Born Wine stall – perhaps an ‘orange wine’, even.

Best of all, unlike its more famous Parliament Hill cousin, it’s dog-friendly. Worth a mention too – good range of streetfood stalls aside – is the new craft ale from the “nanobrewery” based nearby in the crypt of St Mary the Virgin, launched last October, who produced their first commercial brew only a few months ago. Every Saturday, 10am-3pm throughout the year. St Paul’s School, Primrose Hill Road, NW3