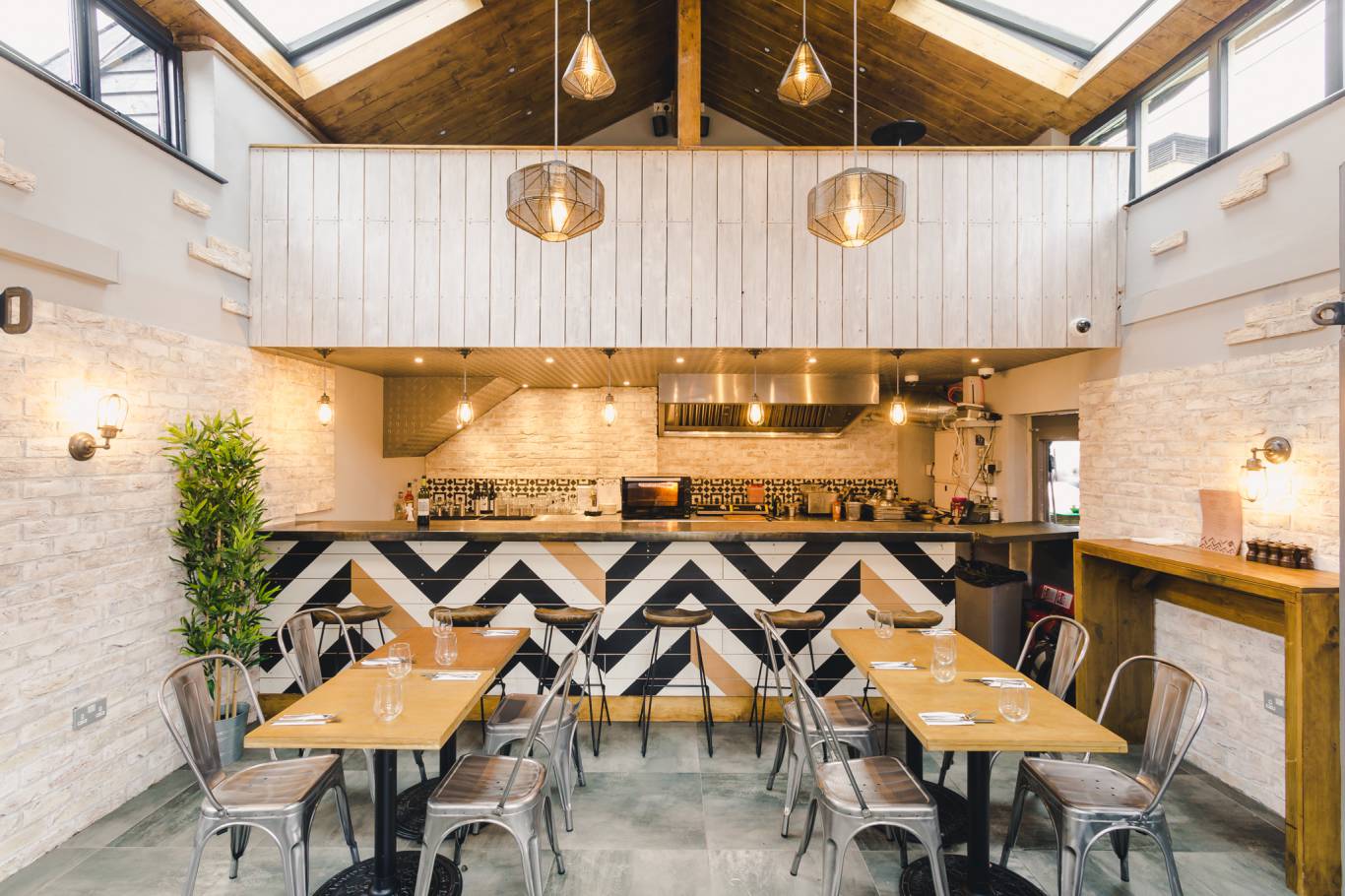 Camden Market is undoubtedly now filling up with decent evening options, but they’re mostly in the North Yard. The canal-side yard, where Kerb market is during the day, can be desolate at night, aside from crowds stamping up the wooden stairs to the Lockside Lounge.

But that’s how we like it. The volume of tourists does get rather tiring in NW1, after all. And Zala, with its high ceilings, mezzanine level and big windows, is a secret that you don’t especially want to share with anyone.

The two-floor space feels bright and airy, with low-hanging lights, distressed brickwork and white-washed walls, and the downstairs room was full on our visit, with efficient service and a buzz in the open kitchen. There’s also an attractive al fresco counter to eat at on warmer evenings.

Zala is the brainchild of co-founders and brothers-in-law, Tomer Niv and Alon Shamir, who go back more than 25 years. One of Israel’s most renowned cooks, Niv (ex-The Fat Duck and The Ledbury) was formerly at the celebrated R’amas Kitchen in Jerusalem, destroyed in a fire last year. The blurb tells us that Tomer’s experience at R’amas inspired his launch menu here at Zala – traditional Arab and Mediterranean ingredients married with western cooking techniques to create earthy dishes.

As consultant chef and co-owner in Camden, he devises the dishes alongside Zala’s head chef Stefanos Avdis, whose past experience includes Greek Larder, in King’s Cross, and Soho’s Princi.

The menu is short and simple. The ‘complimentary’ selection of regularly changing meze is a crowd pleasing touch, including (on our visit) fennel and tomato, aubergine and pomegranate, hummus, baba ganoush, tahini, sweet potato and parsley salad. Best was the sweet, fiery roast cauliflower. And an accompanying cute paper bag of fresh flatbread was torn apart.

Mains (from £12 to £16) include a standout skewer of rib eye – served perfectly medium rare – marinated in olive oil and silan, a sweet honey made from dates. ‘Jerusalem’ chicken – a mix of breast and juicy thighs fried in paprika oil – on pitta is drizzled with colourful sauces such as matbukha, adding slow roasted tomatoey sweetness, yoghurt and amba, made from pickled mangoes. Super-tasty for sure, and just slightly hard to eat – or at least to share. But that’s a minor point.

One caveat: there’s a lot of bread. You’ll be tucking voraciously into the first round with the meze, and then be less enthusiastic at its reappearance for the main. But by this point the chips seemed to steal the show anyway- wonky cut, mismatched and really addictive.

Our wine tip? A potent (14.5%) merlot from Galilee in Israel. Called Tabor Adama, at £34 it’s not the cheapest on the menu (house is a reasonable £18) but its velvety notes of plums and berries, with a hint of tobacco, set the scene admirably for the chargrilled meats.

As does the curated Middle Eastern soundtrack – all of which adds to the waterside holiday vibes.