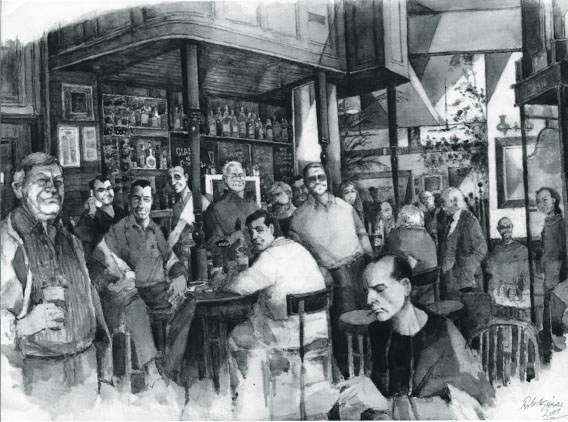 Most readers will be more than aware that Leverton Street boasts an iconic London pub. But how many of you know about its escape from developers back in 2002, a campaign which demonstrates locals at their most tenacious?

The pub opened in 1868 as a watering hole for the influx of workers on the railways. It had three entrances, an outside gents’ and an exterior sporting pineapples above every window and doorway. Its decorative glass area behind the bar was, and still is, exquisite: note the mahogany panels advertising wines, brandies and whiskies in gold leaf and painted glass, and two large mirrors etched with pineapples.

In 2001, after nearly 150 years of being open, landlady Mary Gately sold the business after the death of her husband Sean, on the understanding that the ground floor would remain a pub, with the residential part upstairs being converted into flats. However new owners Crossier Properties lodged a planning application to convert the whole building. Altogether now: boo!

But locals were not, repeat not, to be defeated. On Dec 7 2001 eleven of them met to set up a committee – The Pineapple Rescue Campaign. They managed to rope in stars and celebrities including Jon Snow, Rufus Sewell and Ken Livingstone, who were all ready and eager with their quotes in both the local and national press: “The Pineapple is my favourite pub in London,” said Sewell, to anyone who’d listen. “It is the sort of pub me and my brother had to wait outside in the 1970s and be passed the occasional blackcurrant and lemonade and packet of crisps to keep us quiet.”

A public meeting was held on Dec 12. 62 people attended included local councillors, writers, lawyers and more. They sent out a succession of press releases to national and local media to raise further awareness – and, accordingly, stories ran in the New Journal, Evening Standard, Sunday Times (in a brilliant piece by Al Murray) and the Daily Telegraph, which again quoted Sewell: “If it goes,” he said, presumably with a sigh, “we’ll all end with up places called Pub-U-Like. There are enough middle-class like myself around here already.”

It took just eight – count ’em – days for English Heritage to Grade II list the building, both inside and outside, on Dec 18 2001. The listing stopped the developer in his tracks; his architects had to withdraw and the publicity about the listing also lost the developer his finance too.

The Pineapple was sold in March 2002 to Francis Powell and his daughter Chloe, who planned to continue running it as a pub. It remained closed for 155 days in total and reopened later that year. Campaigners Gill Scott and Jonty Boyce said: “We are absolutely thrilled – this is a victory for the common man, for the community, and for keeping this little part of Kentish Town alive.”

Fifteen years later, the pub is one of NW5’s treasures, tucked away in its semi-secret location. Always rammed, with great real ales, ciders and craft beers, it also boasts its own brand of quirky themed nights – cheese, Spanish, quizzes to name three – for the genuinely mixed bag of locals.

Its bohemian, inclusive atmosphere and approach has also inspired a whole new generation of ‘craft’ and artisan-y type London boozers, including another NW5 institution, the Southampton Arms.

Our preferred spot? Bar-left, at the counter; or if the fire’s on, gazing at the evocative Pineapple-by-Sea etching which adorns the wall to its right. “The only improvement would be if there was the sea and palm trees on the other side of the road.”

If you enjoyed this romp through its backstory, read the real thing: Pineapple Rescued is a coffee table book with captivating black and white images of landladies, regulars, trivia, backstory, paintings and all the press cuttings the campaign attracted, neatly and brilliantly compiled by one of the main campaigners, Gill Scott.

“It remains unusual to wrestle a pub away from a developer; and there are fewer pubs that qualify for listing,” says Gill. “We were lucky that people found the time to help us in those ten crucial days in 2001. The number of pubs that have closed in this area, having been obtained by developers, is high. While the book has the obvious local appeal, it might give heart to others setting out to save a community institution – that it can be done.”

Even better, Gill and other campaigners have also now found the family of the man who built the Pineapple. “They had a copy of the lease,” she says, “with permission to build the pub and 150 houses, between the builder and St John’s College Cambridge who owned the land. It has been scanned and a copy will soon go up on the wall in the Pineapple. The builder, Philip Luzmore from South Milton in Devon, built the pub, three shops and about half of the houses before he walked in front of a train in 1876. His son and his wife finished the rest.” And as for the curious name? “We’re still trying to find out why the pub was called the Pineapple,” she says, “and by whom.”

Meanwhile The 15th celebration will be marked on Easter weekend with a beer festival, 15 real ales from across London and a range of ciders in the garden. “The first cask to run out gets a Tap Takeover,” says affable current manager Poppy.

“The money from the second cask to run out goes to the charity of the brewery’s choice, while the brewers of the third get an evening of food and drink here.”

And there are pleasingly old-fashioned pursuits to enjoy. “Local butcher Meat are doing the BBQ,” she says. “There’s an egg hunt for the kids, an Easter bonnet parade, and a raffle for Pancreatic Cancer Action.”