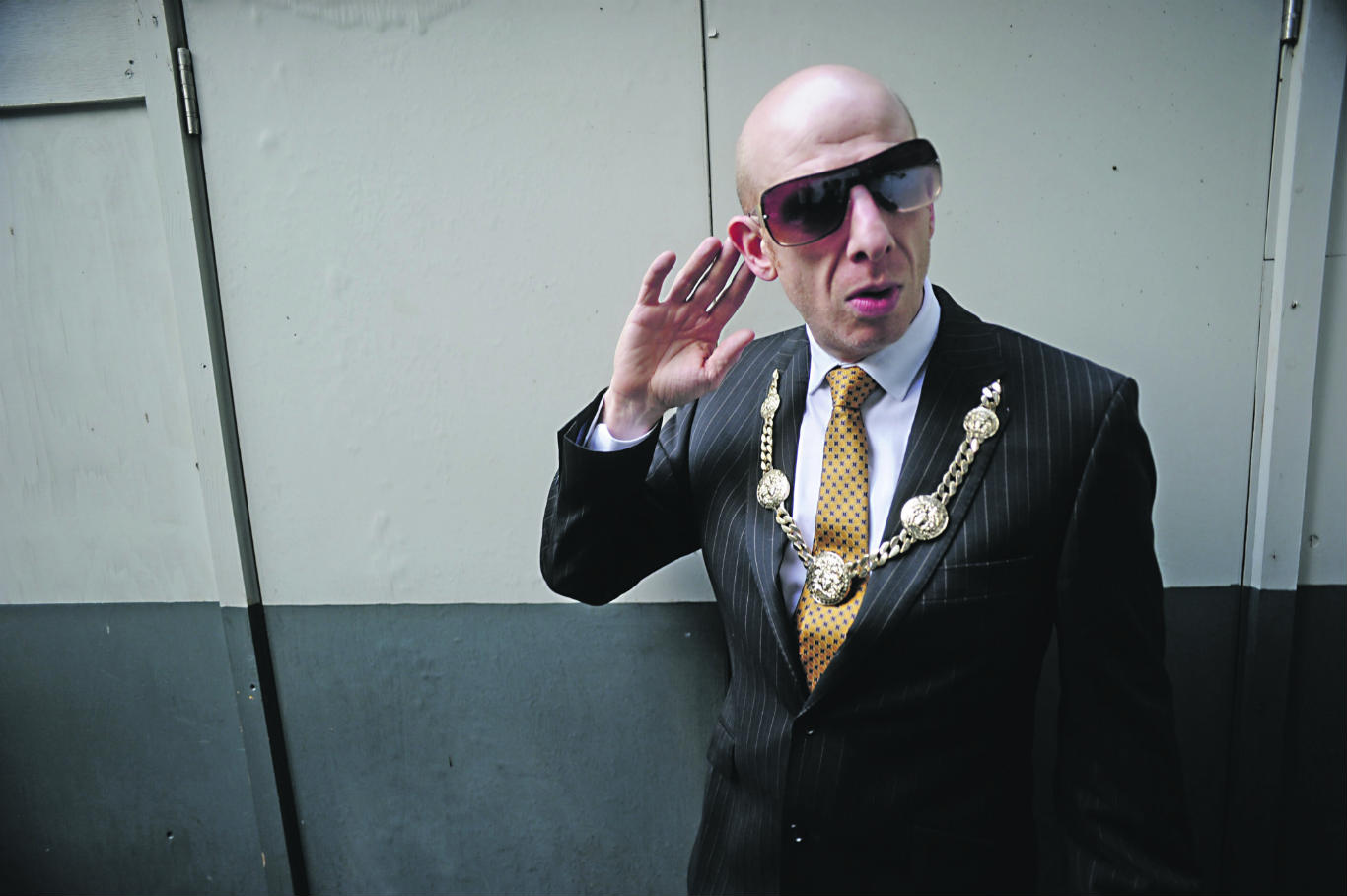 Who does the Mayor of Kentish Town think he is?

Why comedy?
It was always something I wanted to be involved with. As a child I obsessed over Fawlty Towers, Python, Not The Nine O’Clock News and Comic Strip. After college I started Britain’s first ever comedy magazine, the Heckler, and found myself challenged by Jo Brand to grow a pair and get on stage myself. I did – and was involved in stand-up for a few years but hankered after something more about characters.

And that led to the creation of Lenny Beige?
I was offered a Friday night in a small club off Regent Street in the mid-90s – and, yes, it was then that Lenny Beige at the Regency Rooms was born. Within six months we’d moved to the salubrious Talk of London in Covent Garden; and a year after that Beige really took off, thanks largely to Guy Chambers – then my musical director – landing his gig with Robbie Williams, who went on to come to sing at the club quite regularly. It became insane for a couple of years – but boy, was it fun.

Then the Orange cinema ads happened.
That was a bloody great gig. Five years of going to America to work with some absolute legends like Carrie Fisher, Roy Schneider, Val Kilmer, Dennis Hopper, Patrick Swayze, Angelica Houston. I remember Snoop Dogg arrived three hours late, shot for an hour, then retired to his trailer to play Xbox and eat chicken (another couple of hours) then put in another hour’s work before leaving for home, taking the Xbox from his trailer to give to his basketball team. Legend.

North London: discuss.
I lived in Finchley, then Muswell Hill but always went to school in N3. Like everywhere it’s changed but I have to say I recently took my kids back to the first flat we lived in, and the park I played in, and there was virtually no change at all. My kids now live around Holloway and go to school in NW5. Yes, it’s gentrified to within an inch of its life: Fortess Road has gone properly posh from being a no-man’s land. But it was ripe for that sort of make-over as the surrounding area has always been pretty genteel with some great properties.

The Mayor’s Top 5 in Kentish Town

1. The Forum
Still holding on to its position as the premier majestic music venue.
2. The window of Bluston’s
Proper old-skool frontage.
3. Rio’s sauna
My local oasis, a palace of relaxation and stress relief. (Avoid Singles Night – properly odd).
4. Ladies & Gents
My bar of choice: the best use of a form public toilet. Great vibe, brilliant cocktails.
5. Chicken Cottage
They know me well in there; they don’t fob me off with too much of that weird dark thigh meat.

So: the inspiration behind the Mayor of Kentish Town?
A few years ago I wanted to go back to doing some stand-up with a new character; there’s so little that is confrontational, or out there. I’ve promoted for years and have always delighted in polarising an audience. So I wanted a character that was (a) in your face and (b) didn’t require make-up or a wig. I was aware of Rob Ford, the then Mayor of Toronto who was the crack smoking lunatic who had somehow been voted into office – and thought about a local Mayor here.

I needed an area, and love really knowing a character, so that ruled out South London or Essex. The changing face of north London, and specifically Tufnell Park and Kentish Town, was perfect. Here was a neighbourhood that still had poorer patches and a bit of a reputation, whilst also becoming prohibitively expensive. Enter The Mayor – or Graham Loose (as he’s known to me only).

He’s a man that sounds like an idiot but is very on the money. His policies are a little unorthodox but he runs on the common-sense ticket and doesn’t align himself to left or right. People initially don’t know how to take him. I like it when you throw a curve ball and people don’t expect this hard-man to be rather loquacious. I have to say I really do rather love him. And that’s important when trying to inhabit them: you need to really enjoy being them.

Finally, what can we expect from the new show at Tristan Bates?
It’s made up of a range of very different characters: funny and dark – and that’s how I like it. I suppose it owes a lot to Alan Bennett’s Talking Heads, but my collection of weirdos is probably a little more heightened than his rather subdued characters. I’m headlining the First Solo Performance Festival and very honoured that it’s part of a theatrical event, as it does feel like its natural home is in theatre rather than a comedy club.

Other characters (besides the Mayor) are: Lyn, a deluded super fan who lives in her own strange fantasy; Ernie Vas, who owns a waltzer and is in a permanent state of anger at the changing world around him; Dave Pike, an ex-stuntman who shouts at children in the art of keeping safe; and Queenie, a very posh, rather effete and unexpectedly violent man. How? You’ll find out on the night.

A note on Private Widdle

“If you’re ever down on the Kent coast, my home from home is Private Widdle, a variety show at the Astor Theatre in Deal. It’s the baby of Peter Cocks with whom I once worked on a TV show. He began a series of cabaret nights when he moved to Deal and got me in as Lenny Beige to host them. He has exactly the same sensibility as I do and the audience are as good as any I have ever played to. I hope I continue to do so for years to come.” More info here