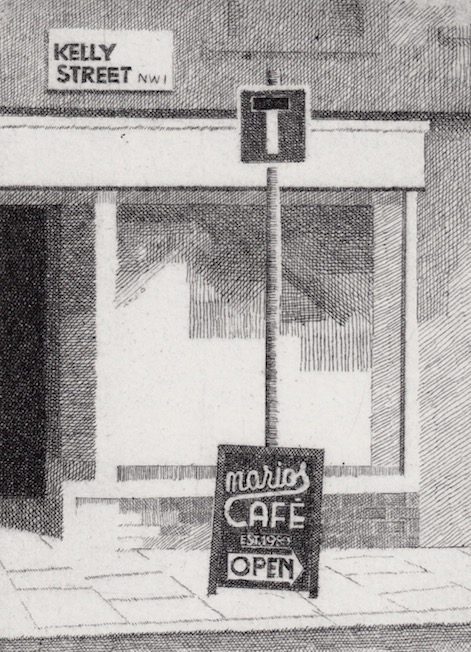 Artist Lisa Scott’s family have been regulars at Mario’s Cafe for the past ten years – “longer than some, but not as long as many,” as she succinctly puts it.

“The place has worked its magic on us, and we’ve grown attached not just to the cafe itself, but increasingly to what it represents – continuity and community.”

Lisa has chosen to immortalise the cafe in some atmospheric etchings (since, as she points out, it’s been the subject of the iconic 1990s Saint Etienne song and a short film or two already).

The show, Fine Lines: Mario’s Cafe & Other Prints, is now hanging on its very walls. There are eleven images about Mario’s, as well as her other recent work. Until March 29th. Open 8am-4pm 6 Kelly St NW1

Stanza Da Tre is a trio of double bass, piano and vocals, with an eclectic repertoire including jazz, bossa nova and folk. They’re organising an evening of “music and art” with artist Ed Blunt, who creates illustrations of train stations from across the world. Tickets £10 here. March 11th, Map Studio Cafe, 46 Grafton Rd, NW5

Our favourite weekend arty mooch – Zabludowicz Gallery aside – is this two-floor space down towards the Regent’s Canal. Next up (16th March – 8th April) are Samuel Zealey’s sculptures, which combine playfulness with engineering. There’s also now an online shop to provide both a platform for artists, and an accessible way to buy affordable pieces of artwork. Open Thurs-Sun 12-6pm. 205 Royal College Street NW1