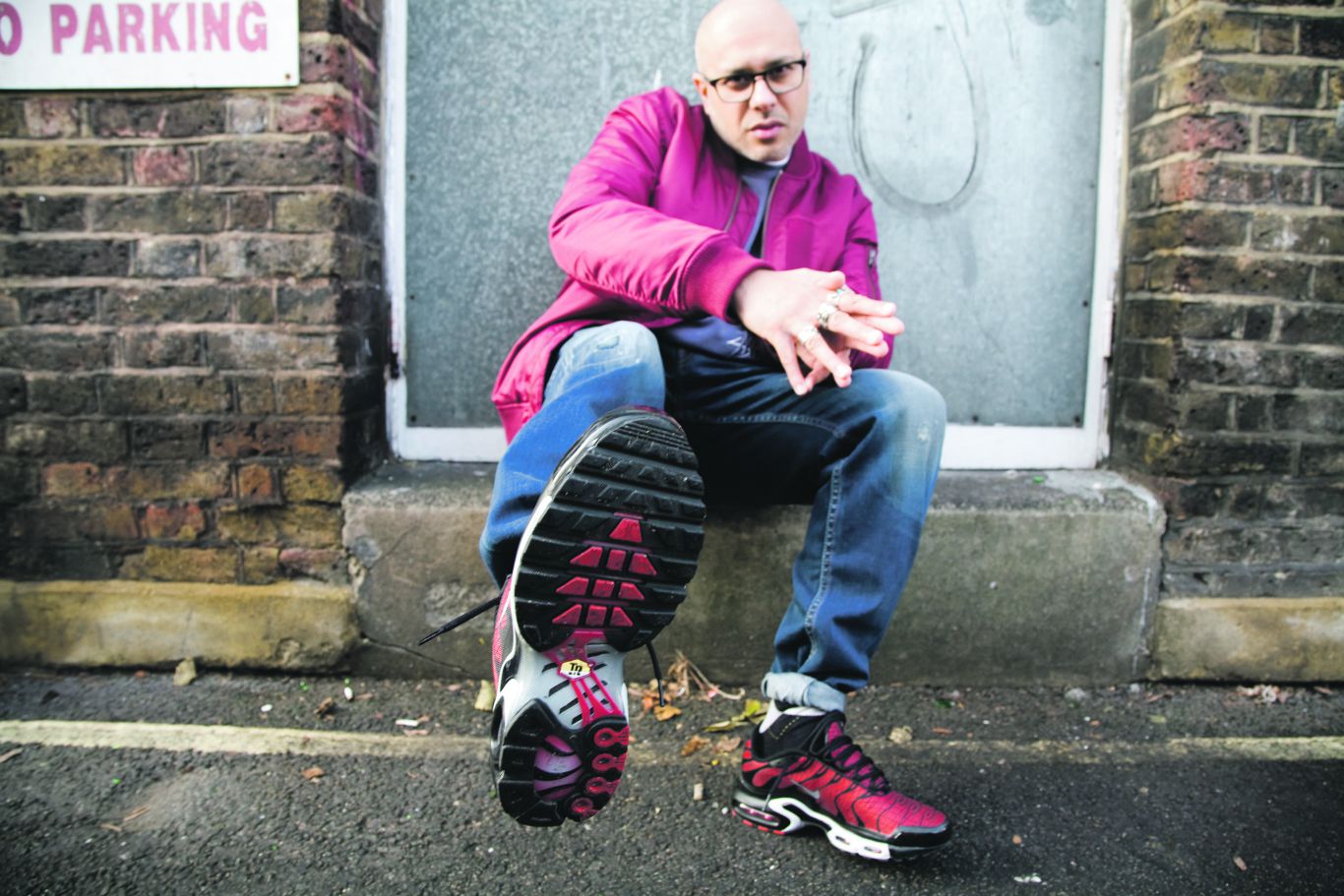 The hip hop DJ talks us through his extensive trainer ‘archive’, London’s nightlife issues – and his favourite local eateries (natch)

How did you get into sneakers?
When I was a kid I was always in them. I’d wear them for breakdancing (badly), skating (badly), playing football (not too bad) and going to the club. I liked how they looked, and how you could go anywhere and do anything in them. When I started buying them myself it was about getting the ones that I couldn’t afford to have as a kid, or my parents wouldn’t buy me. Those were the pairs I loved the most. I can’t pinpoint a moment when it became my thing; it was always about music and sneakers for me.

How would you describe yourself?
I say I’m a sneaker connoisseur – a term coined by my mate Bobbito, a massively influential hip hop DJ from New York. He wrote a piece for The Source magazine in the early 90s called ‘Confessions of a Sneaker Addict’, and I thought “this dude’s just like me!” We’re not sneaker heads, just chasing after hype-driven stuff. There’s a real consideration for why and how we wear the shoes.

How many pairs do you own?
It’s not about how many I’ve got, it’s about what I’ve got. So I’ve never counted them, but I have at least a couple of thousand pairs. That doesn’t make it a collection. I don’t just ‘collect’ shoes to have and look at and show off. It’s an archive, accumulated carefully over a long time. These sneakers are artefacts documenting a culture, and documenting its history. You can see the progression of design, of technology; there are stories behind these shoes, and for me it’s important to preserve those stories.

How has sneaker culture changed?
The internet has homogenised everything. It’s all become a bit formulaic. Nowadays the kids go, “you’re only cool if you’ve got these”, but I say forget that, buy what you’re into and what you like.

Back in the day, if you had the same pair as your friend, you’d be accused of ‘biting’ – having no imagination, copying someone else’s style – and you’d be dissed for that.

You’d have your secret spots and your hook-ups for new drops, or you’d go abroad and discover new shops that nobody else would know about, and it was a real learning process. You had to have street smarts about you. Now, you just go on Instagram.

The other big change is the money. Sneakers used to be a real symbol of street culture. Now a lot of the time it’s about people with money being able to floss, using shoes as a status symbol. There’s aspirational, and then there’s pricing the kid on the street out of the game. As it became more commercial, we lost a bit of its soul. It’s easy to romanticise about the old days, but the game has changed. Everything evolves.

Sneakers or trainers?
In terms of the history of footwear, sneakers is the original term. I was initially reluctant to adopt it because being British I grew up saying trainers. But you can say whatever really: sneakers, trainers, creps, daps, kicks.

You’re a hip hop DJ. How do you feel about the problems facing London’s nightlife?
In terms of nightlife, it’s at a low. But in terms of musical expression, we’re at an all-time high. This has happened before, you get moments of explosion and moments where councils take over and shut things down. But the city needs places to play music for music to grow.

How long have you been in Kentish Town for?
About 13 years, and it’s changed considerably in that time. Right now I think we could probably enter The Guinness Book of Records for having the highest concentration of estate agents and charity shops in
the world.

When I first moved to London, Kentish Town was grimy. There was nothing here, it was just that place beyond Camden. My first local memory is going to gigs at the Town and Country Club (now The Forum), in the early 90s. It was the era when a lot of rappers would get booked for UK gigs, but then they wouldn’t show up, because the promoter was shady. I missed seeing A Tribe Called Quest there, at the peak of their powers, because I was convinced it was too good to be true. They turned up though; by all accounts a killer performance. Still gutted about that one.

What’s your favourite local meal?
Eating out has got so much better. If you’re looking for a sandwich, don’t just go to Pret. The chicken pizzaiola from Tolli in a ciabatta with salad is the one. We’ve got the best Vietnamese place in London with Carrots & Daikon. Then there’s unbelievable duck bao at Pit Stop, or anything at Bintang, burgers at Beef & Brew, and wings at Joe’s Southern Kitchen.

What is Kentish Town missing?
I’d love a good independent shop with all the specialist art, fashion, photography and music magazines. They’re so beautiful, but expensive. It could have a nice cafe or bar inside too, so you could read the mags over a coffee. Oh, and a proper Jamaican food spot.

Kisk Kash hosts the All City Show on Soho Radio, every Tuesday 8pm-10pm