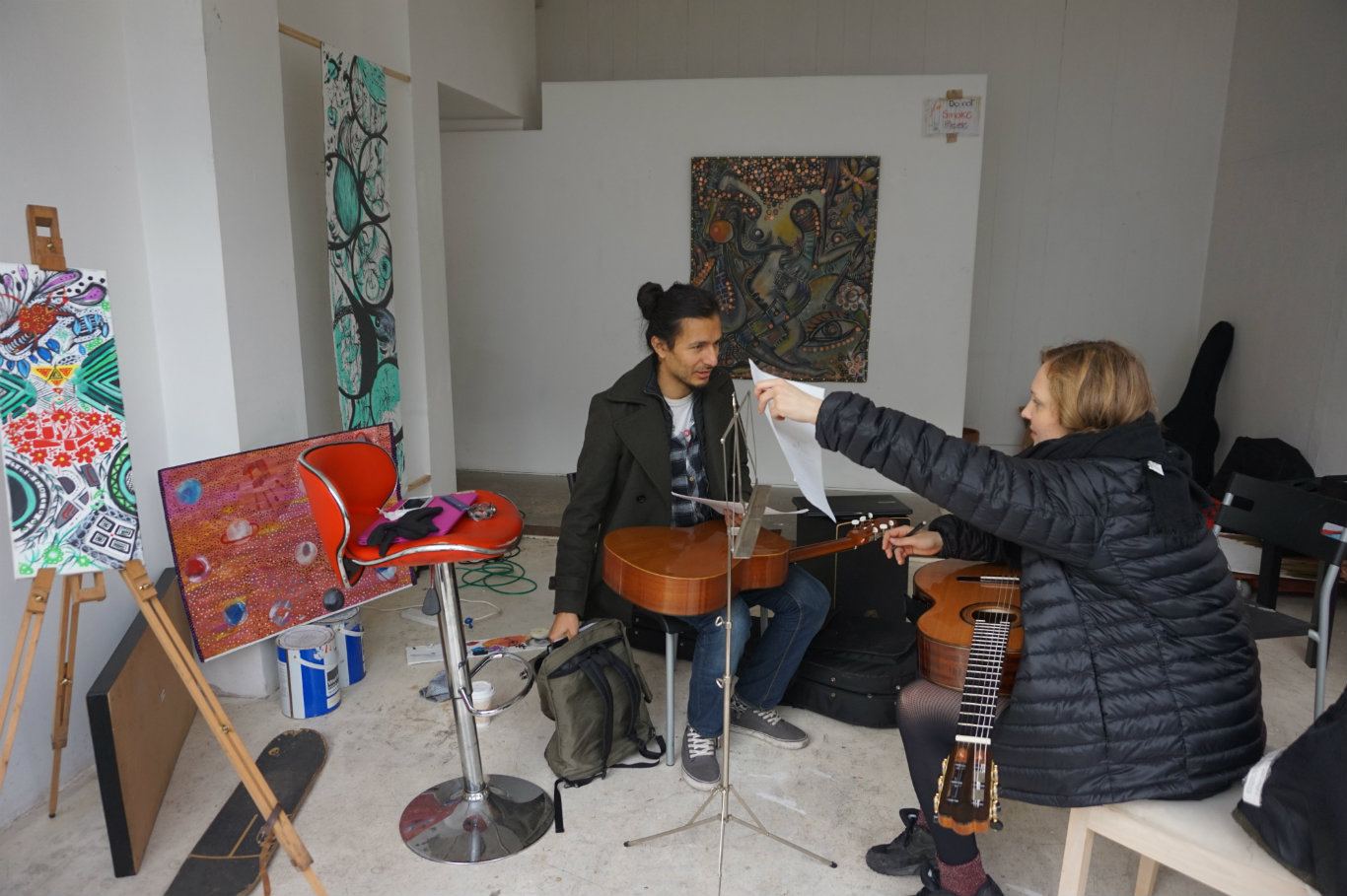 Last May, the Beardsmore Gallery, a minimal former art space on the Prince of Wales Road sadly shut its doors, unable to afford a proposed rent hike by the landlord. Since then, it has been displaying nothing but its own interiors.

Last Monday, a group of squatters stumbled across the vacant gallery and decided that it was the ideal place to re-open and, as they put it, “return it to the community”.

After climbing in through an open window, the group set to resuscitating the space, cleaning it up and converting it into an art and music exhibit once again. The walls are now laced with the group’s paintings and the room is littered with musical instruments which they use to give free music lessons to anyone who asks. A sign underlines this.

The squatters, who are a nomadic group of musicians and artists, have been moving around the city, occupying empty buildings – something that London is certainly not lacking in – for the last year or so.

Find out more about video ads for your business
Their project, they insist, is about offering something constructive to the residents of Kentish Town and Camden. This area is of particular importance, explained Ago, a member of the group, due to its historic significance for radical and alternative subcultures – something that it is losing, like many other inner city postcodes, with gentrification. Indeed, Kentish Town has always been popular with squatters and Ago sees it as their responsibly to keep the radical cultures alive and kicking in London.

“This is not about money and not about this building,” insists Tino, another member of the group. If and when they are evicted (fairly likely considering the lengths the owner has gone to in order to remove them), they will simply “move to another building and set this up there.” This is not about the property, they say; it is about creating something for everybody in a space that would otherwise contain nothing.

The group are openly displaying their presence through the huge windows of the gallery as a way of “debunking perceptions about squatters”. Ago and Tino both explained how people often associate their lifestyle with incorrect assumptions about them, namely that “they don’t want to pay for rent, they don’t want to work and they are all drug addicts.”

This is far from the reality of the situation. “We are a small unit of young people who want to create art and share music,” he says. In doing so, they hope to demonstrate and encourage an alternative way of living. This is all they say they desire and ask for nothing (especially not money) in exchange.

A concept lost on the owner of the building who has tried, on multiple occasions, to make cash settlements with the group in order to provoke their departure. On one occasion he even went as far as “to wave a wad of fifty pound notes at them through the window”, a bargaining method that won him no favours, they say.

It’s a stalemate, of course. While property ownership and the financial revenue that this entails are of central importance to one side, these concepts are a valueless and constructed necessity to the other. Witnessing a discussion unfold between the two sides yesterday was like seeing a fish and a bird embroiled in a heated debate about the necessity of water. The fundamental concepts over which they are attempting to deliberate, namely property and money, mean something completely different to each.

After refusing to accept the squatters offers pay for the electricity they use, the owner cut the power running to the building on Wednesday. Despite the discomfort that this has caused, it has not brought a halt to their plans to stay in the property and indeed to host a “gathering” on Saturday evening.

They will be playing an acoustic session, offering free vegetarian food and opportunities for locals to appreciate and participate in their art and music projects. With an imminent court case looming over their heads, the group is attempting to utilise this art gallery for its original purposes on Saturday night, albeit via candlelight.

As for what the future holds? Well, the squatters are fully intent on staying in the Kentish Town area. As they maintain, Ago and his friends hope to “continue the work they have started in this community.”

This is box title
The free event takes place on Saturday 27th Jan from 6pm-11pm at 22-24 Prince Of Wales Road NW5.

Agree? Disagree? Add your thoughts below.