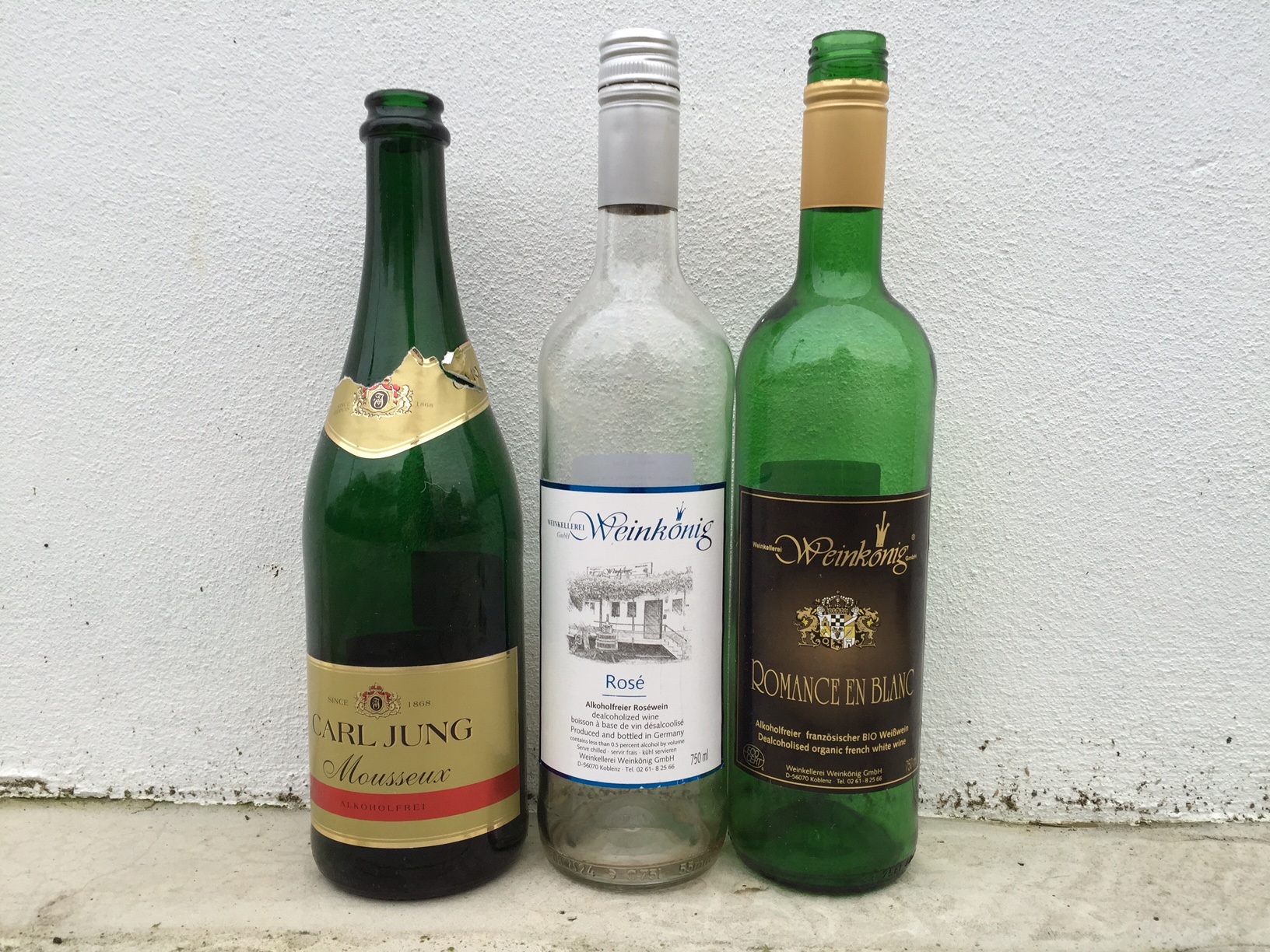 My search to find an alcohol-free wine worth drinking

Stephen Emms spent January sampling a world he knew nothing about. Here's what happened

Yes, we did the clichéd thing: my partner and I stopped drinking. Not necessarily for a month, we decided initially – but for as long as we cared to.

So far we’ve stuck to it. However, this year – unlike previous attempts marked by copious pints of lime and soda – we landed upon a more captivating way to pass the time: to explore the world of alcohol-free wine.

Well, why not? Others book themselves into new-year yoga or mindfulness classes, or join the gym, after all. Would this be our, erm, liquid salvation?

But first, what on earth is alcohol-free wine? “Producers use different methods,” says Christine at the Alcohol Free Shop, whose online store offers by far the best selection around. “The alcohol is removed using one of three processes at cool temperatures to avoid damaging the wines. They’re ordinary alcoholic wines up to this point, so the characteristics are retained.”

Sounds promising, doesn’t it? We then learnt that the three main methods are: a) steam vacuum, pioneered back in 1904 by Carl Jung, where vapourisation can be achieved at much lower temperatures, so the wine loses its alcohol but retains characteristics and flavours lost with normal boiling; b) ‘reverse osmosis’, which forces the fluid through a filter to separate the alcohol; and c) centrifugal force, used in some de-alcoholised wines to ‘throw’ the alcohol away through filters – a process that has to be repeated many times to work.

Got that? Good. With the science bit out the way, the next obstacle – should you wish even to buy a bottle locally – is actually finding a booze-free retailer. Go into Oddbins (say, on Kentish Town Road), Majestic, Wine Rack, or somewhere posher like Bottle Apostle and there’ll be a slow shaking of heads. In Nicolas on Regent’s Park Road, the young Frenchman behind the counter even shamelessly mocked my request. Thanks for that.

We scored at the indy off licence Grape Sense next to Chalk Farm tube, as well as supermarkets like Sainsbury’s and Waitrose (and of course online).

But this was just the start: as we were soon to discover, finding a de-alcoholised wine that actually tastes convincing – or even drinkable – is so tricky that the search may acquire ‘holy grail’ qualities.

Yet the game is a healthier addiction than booze itself, right? Especially as the wines are very low in calories, often just 100 cals per half bottle, or a minute 35 per glass. Sugar levels vary, with some (like Sainsbury’s cheap and watery ‘Red’) packing a whopping 7.5grams of sugar per glass.

Don’t expect de-alcoholised wines to taste like the real thing and you might be surprised. That’s not to say that they are simply glorified grape juice, or sickly-sugary soft drinks. Not at all. But just don’t expect that “hit” of alcohol when you take that all-important first sip.

To sniff or not?

It might be best not to stick your hooter into the glass before you drink, if you’re normally that way inclined. In our experience you won’t get much of a whiff beyond a vague must. Sometimes the smell can even put you off, as with the vinegary aroma of the aforementioned Sainsbury’s ‘Red’ which, at £2.50 a bottle, is both cheapest and least impressive of the many we’ve tried.

We also learnt very quickly that they all taste better after an initial gulp. Yes, that sounds like something you might tell a teen who’s never tried a grown-up drink before, but in this case it’s true. Once that’s out the way, taste properly, with the burden of expectation firmly behind you, the ritual of glass-holding taking sway, and (hopefully) an open mind. If you’re drinking it with friends, you might even forget you’re nursing a ‘fake’ – as we did the other night round the dinner table. Heck, were we tipsy by the end of it?

The reds we quite liked

Reds lose much of their body after being de-alcoholised, but the following are decent enough: Romance en Rouge, with its sharp blackcurrant edge (but pricey at £7.99, alcoholfree.co.uk), and Natureo by Spanish brand Torres (Waitrose, £5.79), nearly convincing with its dry, oaky finish: not quite as potent as a real Syrah, but not bad at all (it’s low in sugar, too, at 3.6g per 100ml, and just 32 calories).

Better still was a German Eisberg (Morrisons, £2.75, above) made from Cabernet Sauvignon, almost sophisticated, with deeper ripe berry flavours. And we didn’t mind the Weinkonig Merlot, although it was rather thin, with a hint of sourness, but smooth enough (£6.99, AFS). The most expensive red at the Alcohol Free Shop is Win 12 at £9.99: a Tempranillo varietal that has been aged for 12 months in American oak barrels, it’s sweeter than I was expecting, and the label on the bottle advises it’s served chilled.

Less impressive? Californian brand Ariel’s Cabernet Sauvignon, which we hoped would trump these because it was right up at £7.99 (AFS): realistic in its oakiness, with hints of blackcurrant, cherry and vanilla, it was nonetheless a bit watery and furry on the palate.

It’s much easier to find alcohol-free beers and lagers, of course, especially in pubs. We quite liked the crisp fizz of Morrison’s Bavaria brand (£1.98 for four bottles). And we rated Bitburger Drive (£12 for 12 bottles), which has enough of a taste (beyond the rather empty fizz of, say, Becks Blue) to convince even the grizzliest lager guzzler with its clean, continental qualities. Find it at Young’s pubs like the Bull & Gate in Kentish Town, amongst others.

We were less convinced by St Peter’s Without (alcoholfree.co.uk), which had a slightly unpleasant burnt toffee edge to its well-crafted malty flavour. A Bernard amber ale was rather bland, although attractively fizzy, and not as refreshing as an Arcobrau craft lager (these are all around £35 for 24 bottles at alcoholfree.co.uk).

Best of all? Nanny State by Brewdog (£1.25, Sainsbury’s), which is hoppy, moreish and packs a real flavour (with no aftertaste, unlike some of its competitors). You’d almost never know.

The verdict on a white and rosé

It was a surprise that the white and pinks we tried (all from the Alcohol Free Shop) were in some ways easier to enjoy than the reds. German manufactured Weinkonig produce a Romance en Blanc, an organic blend of white Sauvignon Blanc and Sémillon grapes from Bordeaux (£7.99). Its slight sparkle adds to its tangy, appley, and citrusy qualities – and it proved pleasant with fish (and nearly as moreish as a regular Sauvignon.) The same brand’s pale pink rosé (£5.49), made from Carignan, Syrah and Mourvedre grapes, wasn’t too unappealingly fruity either – but equally not as dry as we would have liked.

Our favourite alcohol-free wine, then? The Carl Jung Mousseaux (just £5.99, AFS, see main pic above), a pale, lemony medium dry fizz that yields a slight prosecco-like aroma, but is in fact closer in taste, bubbles and character to cava: zippy, but not sweet either. It’s also low on the calories front – just 22 calories per 100ml.

Truly nasty Californian Fre, £3.79 from Waitrose, with an unpleasant mothballs/ vinegary slick that stuck like fur to the palate. We foolishly bought two bottles: one is still sitting on the kitchen counter, staring at me, unopened. I’m not sure whether it should even be used in cooking. Lest we forget, Red from Sainsbury’s is not really worth the bother, either.

Although the booze-free beers are fairly sound, I don’t think we’ve found “the one” wine yet, as they all inevitably lack the oomph of the real thing: however, the Carl Jung fizz, Romance white, and a couple of the reds (such as the Eisberg) all make admirable substitutes, and might just be revisited in the future.

And the most compelling thing is that our journey exploring this hitherto unknown zero-per-cent world has been so addictive – and way more absorbing than I would have once, scoffingly, thought.

Many of the wines featured above can be bought from the Alcohol Free Shop online here. Brewdog have pubs across London including in Camden (Bayham Street).

This article was updated on 25th January 2017