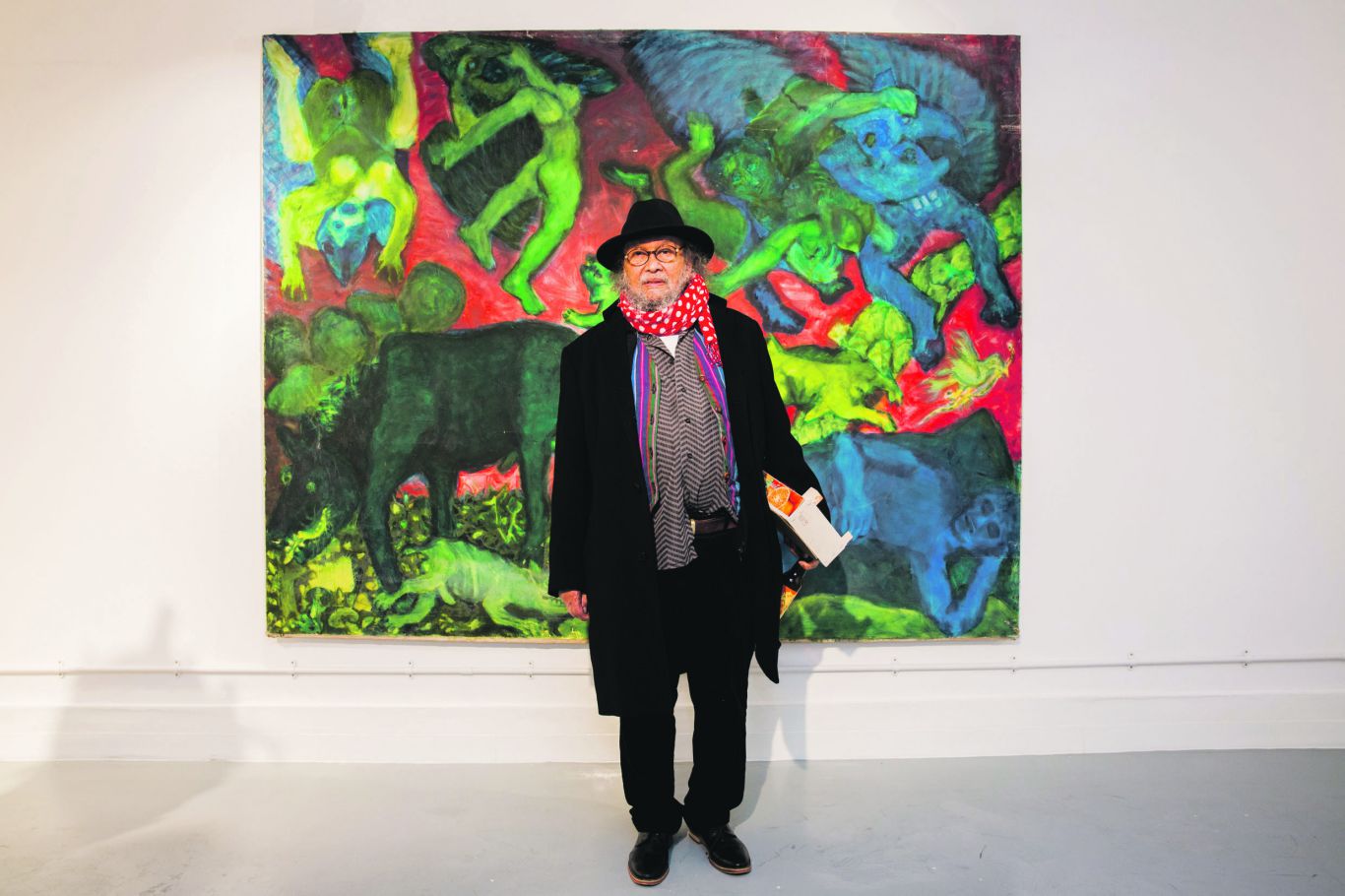 A fisherman turned self-taught artist, Jose Nava was born in 1937 and grew up in the barrios of Acapulco on the pacific coast of Mexico. In 1961 he travelled to England and quickly became involved in the experimental theatre company, The People Show, building sets, costumes and performing internationally.

Subsequently dedicating his time to painting and drawing, he lived in a self-built ‘shed’ in Kentish Town, reminiscent of a Mexican barrio house filled with stuffed fish, sculptures, artefacts, textiles and hundreds of sketchbooks. Here he tells his story in his own words.

On moving to a shed in NW5

“A long time ago, when I first came to London in the early Sixties, I was walking through Holmes Road and saw the little cottages and thought, wouldn’t it be nice if I could live here. Years went by, and in the mid-Seventies, I actually managed to buy a very old cottage there. It was cheap – about £20,000 – because it was squatted at the time and in a bad state of repair. The squatters living there were nice people, helpful and they kindly moved out so that I could move in. One of them is still a friend.

At the back of the garden was a collapsed old shed. I found some carpentry tools in there so it looked like it had been a workshop of some kind before. I decided to fix it up because I needed somewhere to paint. Luckily, on the other side of the garden wall was a scrapyard. They were in the process of clearing it ready to move from the area to make way for a new building and they had plenty of wood and metal, including a huge mountain of old timber.

I asked if I could have some of it and they told me to take as much as I wanted. There were floorboards, roof beams, a lot of what I needed, so I took what I wanted and threw it over the wall – and that’s when I started rebuilding this collapsed shed. I picked up old doors and windows from skips I found when I was walking around. The whole building is made from recycled materials.

The shed is at the end of a beautiful, wild garden. Originally, there was a Victorian outside toilet and a lovely raspberry plant growing through the toilet window. In the spring, the whole garden was filled with thousands of bluebells and other wild flowers, and there were blackberry bushes and a pear tree. I lived in it on and off for about eight or nine years – but now use it as my workshop only.

I like the diversity of the people. When I first came here, Kentish Town Road was full of very traditional shops – butchers shops, greengrocers, fishmongers. Now there is only one remaining of the old shops, Blustons the clothes shop.

The rest have been replaced with wine bars, restaurants, pubs, expensive specialist food shops, nail bars, supermarkets. The community of Kentish Town has changed hugely thanks to modern so-called progress. But in spite of everything, I still have my shed which hasn’t changed. But most of the time I live with my partner of 17 years, Amanda, at her place. I go to the shed as often as possible to do my own work. I consider myself extremely lucky to have a place where I can paint. And of course, I will remain working there for as long as I can.

On the differences between Kentish Town and Acapulco

It’s like the sun and the moon! Acapulco is very hot and sunny, and Kentish Town is grey, cold and wet. I grew up fishing with my uncle, skin-diving for oysters, catching clams, turtles, lobsters, all kinds of fish. I lived by the port with my family in a house that my aunts and grandmother had built in more or less the same way that I built my shed. I was born there, underneath a mango tree that arched over the house. My dad was a cobbler. Life was very simple. I never thought I would ever end up in London, but curiosity and unexpected circumstances brought me here in my early twenties. And now I have family here – six children and a stepson, plus four grandchildren.

On the area influencing work

There are so many people from all over the world, which makes it interesting. When I’m out in markets or cafés my attention is often caught by people I see and I draw them. Kentish Town is not the only place that has affected me though; I’ve already been influenced by Mexico and many places I’ve visited in Europe and England.
This is box title
Fish Out of Water, a solo show by Mexican painter José Nava, is at Koppel Project until 20th Jan, open daily 9-6pm except Sunday, 93 Baker St, Marylebone W1U 6RL