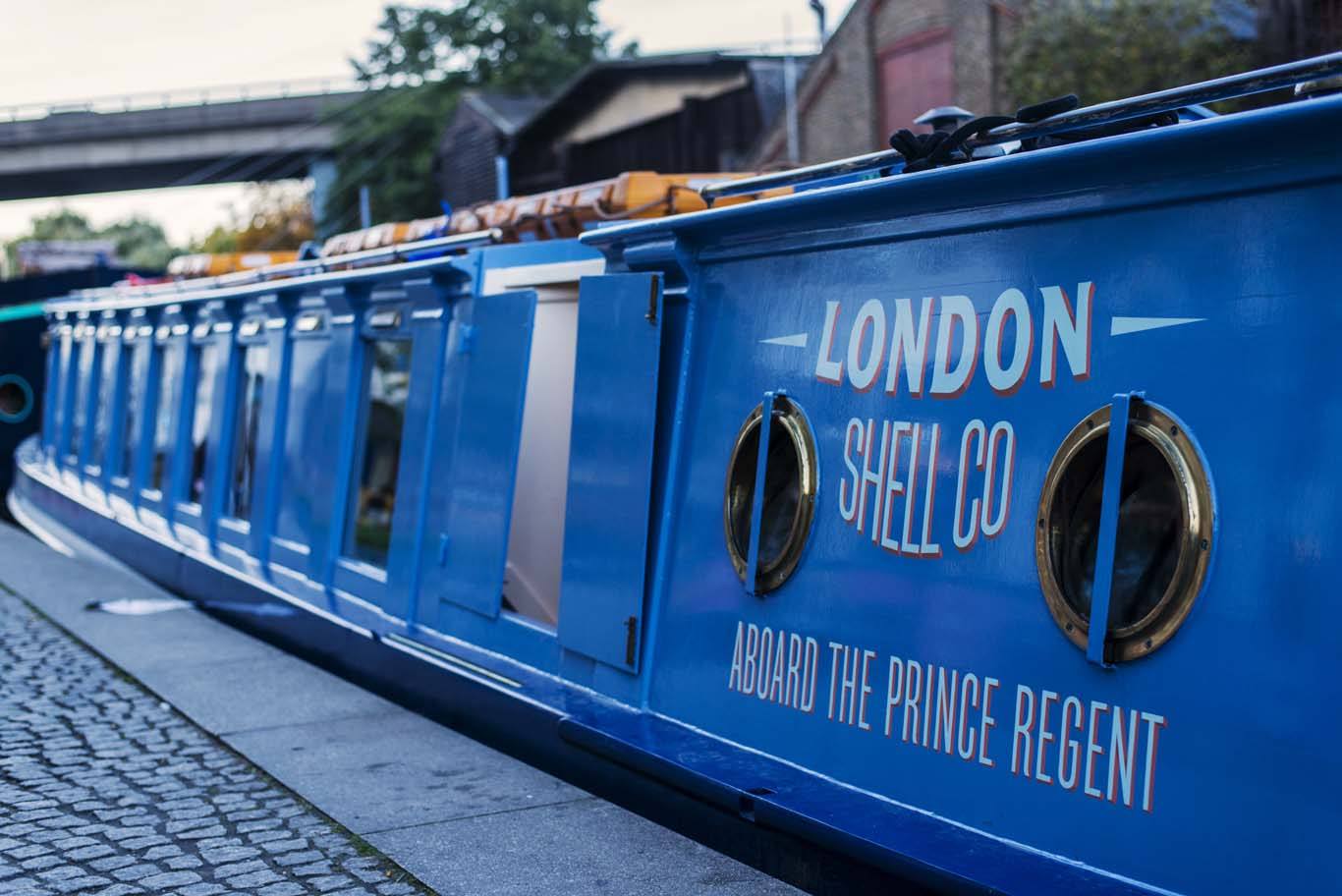 There’s an inevitable tendency for pop-up restaurants to take things to extremes. The endless quest to score Next Big Thing status means that an assured hand in the kitchen or flair behind the bar is now deemed no longer enough. Diners must dangle from the end of tall cranes or be surrounded by immersive costumed theatrics while they attempt squeeze in the odd, distracted mouthful.

Upon arriving on this scene last year, London Shell Co’s own particular shtick was that meals were served while traversing the city aboard a narrowboat. Eating on the Regent’s Canal is by no means a new angle (they borrowed an existing floating restaurant for the pop-up), but the brother/sister team at the helm were set on steering urban waterway dining in a new direction.

Reports of their piscine sharing plates and thoughtfully paired wine list made just the right kind of splash before their limited initial season was over. And the many obvious challenges that come with attempting flawless cooking and service for 30+ people at once in such a confined space twice daily doesn’t seem to have put them off their waterborne mission.

Now, having signed a 10-year lease on historic local boat the Prince Regent, London Shell Co has launched as a firm, if forever roaming, fixture on the capital’s list of quirky destinations for a memorable meal.

Stepping down into the boat on a wintry evening, there’s a lovely warmth emanating from within. To one side the kitchen is in full flight, plates piled with oysters teetering and ready to go, to the other, an already fairly noisy collection of guests are sipping on welcome drinks and getting to know their neighbours amidst the twinkle of soft side lighting against plentiful table-top glassware.

Host and on-board sommelier Harry has done time at all the right joints, including Highgate Road’s Bull & Last and the Pollen Street Social, and he exudes confidence in his drinks list, which has a pleasingly English slant. Meanwhile sister Leah works the puzzle of getting everyone happily into the boat’s tight-fitting chair configurations, then whisking them out their first plate of impressively-sized Irish molluscs, as if this routine is already second nature.

The whole operation is so slick you can – almost – begin to understand why they’ve committed so wholeheartedly to a life on the water.

As the boat chugs through the ethereal symmetry of the Maida Vale tunnel (make sure you head up to the bows for a quick nosey outside at this point), the pace of the meal motors along with a similar grace and purpose. There are no fits and starts, the sharing plates keep coming, each one an instant talking point across the cosy tables.

Delicately smoked roe and burnt leeks on croutes proves very moreish, while strips of hispi cabbage scattered with meaty little brown shrimp is a simple but effective combination, too. Pickled herring with some serious dill-flecked horseradish brings the flavours to a crescendo, and is accompanied by an equally hardcore drinks pairing of Burrow Hill bottle-fermented cider. A fairly challenging tipple, it nevertheless works a treat with the blast of pungent fish and herbs.

We glide past Regent’s Canal’s most iconic, if incongruous dining proposition: the floating Chinese restaurant by London Zoo. Who eats here? Sure, it could be argued that, 30-years ago, they were blazing the trail for all the crane-dangling destination dining experiences of today, but it remains seemingly forever stuck in a tourist guide timewarp. Meanwhile, the Prince Regent slips by each evening, stuffed with enthused diners having – I’d wager – a somewhat more exciting floating meal. And we’re actually moving too.

By Camden, things are getting decidedly merry on board. We’re tucking into a main of fluffy, almost translucent cod, perched atop a rich and creamy medley of cannellini beans, smoked pork and cavalo nero. We washed this satisfyingly warming plate down with the evening’s only red wine, a delicate but deep Burgundy, a 2008 Fixin ‘Le Crais’.

Pudding ends up being all about the sweet nectar of Somerset Pomona cider brandy, and before we know it, the boat is mooring up where we left off in Paddington Basin and, seemingly all too abruptly, our night of culinary city cruising and boozing is over. We could easily have sailed about for an hour or so more, but can’t really fault the zippy pace of the evening. In an environment where so much might potentially go wrong, absolutely nothing has, and we tumble back into the cold reality of the outside world still very much under the spell of such a smooth few hours spent aboard this cosy vessel.

With regularly changing menus, and moored lunchtimes at Paddington too, there’s every reason for us to make London Shell Co a regular port of call now they are fully-fledged post pop-up. Dining on the canal has indeed grown up.

This is box title
London Shell Co cruises every Wed-Fri from 7.30pm-10.30pm (static lunches 12pm-2.30pm). Set dinner £45 with wine by the glass from £4.80. Meet the boat at Sheldon Square, Paddington Basin. Reservations and more info.