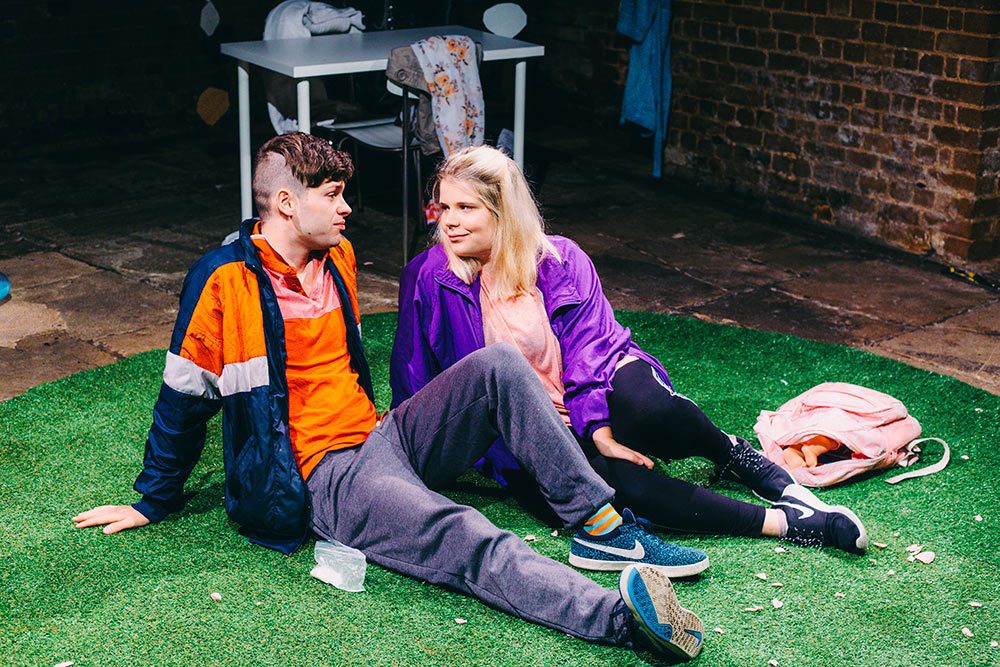 After an impressive nine break-ups and make-ups, seventeen year old neo-love-birds Leo (Bob Yates-Tily) and Caitlin (Eliot Salt) are probably not the best candidates for parenthood.

Pulling Out, the latest offering from Documental Theatre, follows this young couple’s tumultuous journey from unexpected conception, through to the wrath of their furious parents, to the birth of their child and their against-the-odds attempts to make their family unit work.

Stephanie Kempson and Lucy Bell (the talent behind last year’s excellent Score) have created a play that uses humour to produce a piece that’s as warm and relevant, as it is poignant and insightful.

The hour-long work, performed over two nights on Hampstead Road last week, was inspired by conversations with young dads in London and Cornwall. It primarily follows Leo’s attempts to abandon what he knows – school, dating and partying – in order to “do the right thing” and fulfil a parental role that he is neither ready, nor fully able to fill.

Constant stigma from the mother of his child, his family, his peers and society as a whole leave Leo feeling frustrated at never being able to do anything right and always falling short of expectations. Highlighting an important issue that is often disregarded, the play addresses the idea that young dads are often accused of abandoning ship before they have even stepped aboard.

While the role of the father is the primary focus, the play simultaneously gives insight into the life of young mums. Eliot Salt’s multi-character performance sees her impressively give as much authority to Caitlin’s omission that she is little more than a “tea towel with benefits” as she does to Leo’s friend’s interesting attempt to convince him that he can’t be a good dad if he is sexually frustrated.

Salt’s performance made this two-person-play feel like a troop of actors had taken over the intimate stage at Camden’s People’s Theatre.

Pulling Out kept the audience chuckling and thinking for the duration of the performance. While honestly portraying and gently questioning society’s expectations of young parents, the work concisely and effectively gives a voice to young dads – a voice that is barely asked for and rarely heard.

This is box title
Pulling Out played at the Camden Peoples Theatre NW1. To find out where and when it’s next on, follow @documentaltheat on Twitter or check out the website here