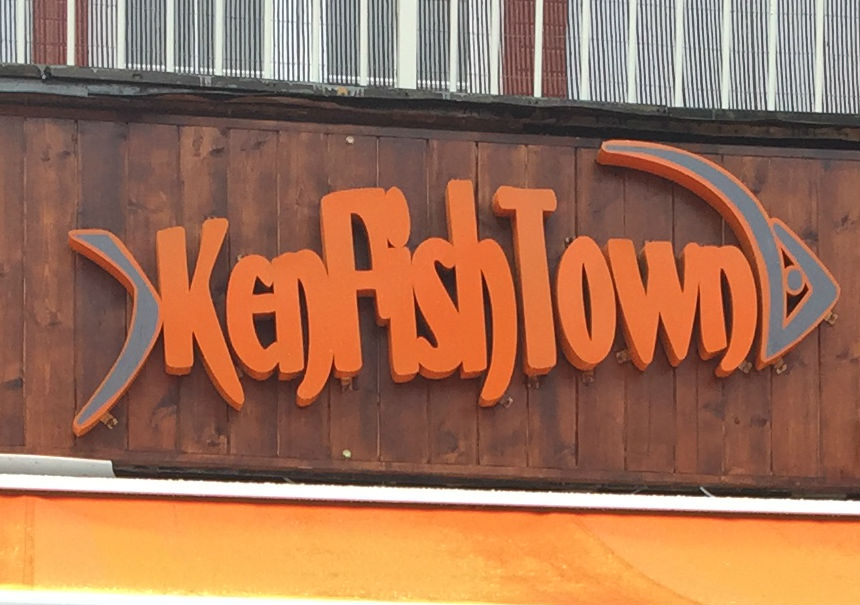 Now, we enjoy a punning name for a chippie as much as the next flounder: think Fishcotheque in Waterloo, Codfellas in Peckham, and the Codfather in Finchley Road. And that’s just for starters.

But is this new arrival to Kentish Town Road, KenFishTown (geddit?) a fin too far? Or the best, punniest name ever? And can you believe it’s landed right next to high street pun stalwart Hair Today?

So far, so crying-with-laughter-emoji. But the fashion for wordplay, in fact, goes back to the first ever UK chain of fish restaurants, Samuel Isaacs, founded in 1896. Their slogan (get ready to LOL)? “This is the Plaice”.

This new outlet, the second in an Edgware-based small family chain (not owned, alas, by Ken Fish himself), has an eat-in counter and a couple of alfresco tables. It opened late last week on the site of Danny’s, which lasted a couple of years.

Despite the quirky name, and colourful branding – one half-tiled wall pays homage to famous cod gobblers like the Beatles, who allegedly ate at a previous incarnation on this site – it’s business as usual in the food department.

The menu is standard haddock/plaice/cod with sides, as well as a substantial veggie offering, and priced at about £7 for a meal. There are also calamari rings, fish cakes and cod roe.

It’s worth trying the £5 lunch offer, as we did yesterday. First thoughts? It’s a much bigger portion than expected at that fairly bargainous price: the fish was succulent enough, the batter crisp (if a little greasy) and the chips home-made and thankfully not greasy at all.

A side of mushy peas (a quid extra) wasn’t bad either, although needed a bit of oomph – otherwise known as seasoning. But that’s OK: salt and vinegar were readily on hand.

Take a pew outside, if you can: it’s quite the spot for people-watching. As office-workers, locals, funkateers and media types swanned up and down from Highgate Road, we gazed at the, erm, islands of Kentish Town, crowned by toilet-turned-bar Ladies & Gents – before torrential rain swept in and everyone scarpered. Thankfully the the owner came out and extended the canopy. A nice touch.

But back to the soleful job in hand: is the name inspired? Or a bit, well, pollocks?

This is box title
KenFishTown is open daily till 11pm at 385 Kentish Town Road NW52TH.