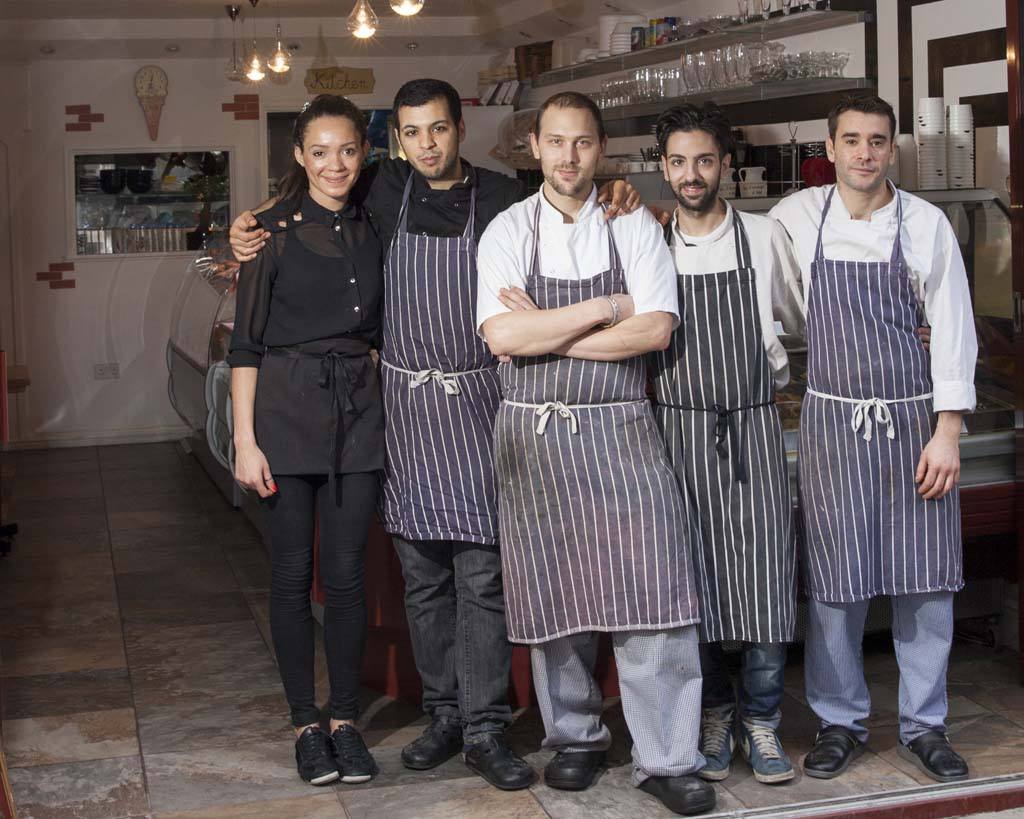 The hit Kentish Town Road restaurant is now open five evenings a week. But is it any easier to get a table?

A couple of years ago we popped into a low-key new opening on the lower Kentish Town Road. It was a casual lunchtime visit at what looked like an ice cream parlour, but its counter was laden with artisanal goodies, and beyond lay a windowless dining room.

The day’s chalked-up starter was a simple carrot soup, but this was the start of an unexpected culinary adventure: here the vegetable appeared in no less than three guises, the broth studded with carrot gnocchi and topped with crispy carrot strips.

A rosemary baba – a muffin-like bread which takes 48-hours to prove, rise and infuse (see main pic, above) – exuded parmesan richness, enhanced by a mousse of taleggio with walnuts upon which it came so daintily perched.

W e couldn’t keep this discovery to ourselves and gave the place a rave review: it was no surprise when Calabrian-born owner Mustapha Mouflih explained that his team had backgrounds cooking at Four Seasons Park Lane, Le Gavroche, Ilia and Cecconi. Their aim with this small opening in a grungier part of Kentish Town, however, was not just to serve “a clique of billionaires” but for it to “feel like home. We wanted the chef to come to your table himself, tell you what we found at the market today, then go to the kitchen and cook each dish.”

A nice idea, indeed; and each time we visited, the food improved. Many other publications, including Time Out, followed with gushing reviews. The result? Anima e Cuore became pretty booked up.

After we put them on the cover as our top new arrival of 2014, you couldn’t get near the place. Friends would moan that the restaurant was booked solid till May, or July, or October, while it didn’t help that it was closed on and off for much of the summer, due to other commitments.

The upshot? With a shrug, I consigned it to the shelf of great places I wanted to eat at, but wasn’t organised enough to book. Heck, I’m rubbish at diarying anything three months ahead, let alone a local meal out.

So it was about fifteen months after our last visit that we finally decided, on the spur of the moment, to drop by one cold Thursday night in March. It was just before 7pm, and serendipitously we snared the last free table in the back room which, we noticed, has had a slight makeover since the place first rocketed in popularity. Now there are sturdier wood, rather than laminate, floors, more atmospheric lights, and a stylish lick of paint on the walls.

Thankfully it’s still BYO – and there’s no corkage (unlike some cafes we know, which charge up to £8 a bottle). And as well as chef-patron Mustapha circling the small room explaining what he has on the menu, a waitress now passes round a blackboard, with one side of starters and another dozen or so mains scrawled up daily.

The good news? The food is even better than it was. The two years’ experience shows in the slickness of the dishes, many of which we’ve tasted over a few recent visits (most spur of the moment). The signature tuna tartare, avocado cream and cucumber sorbet (above right) is as beautiful to look at as its spicy, fishy and chilled notes are balanced.

Caramelised scallops are paired with smoked mackerel and mullet – something I haven’t seen before – to give a gratin that’s creamy yet light, its earthiness underlined by nutty borlotti beans. Gnocchi with salt cod and anchovy is all umami flavours, with the al dente bite of asparagus.

A highlight? Strangolapreti (or priest stranglers), a gnocchi made from stale bread rather than potatoes, which are bright green with a herb sauce that melt in the mouth. The dish is traditionally served on Fridays, when religious restrictions forbade the consumption of meat. (As the legend goes, priests and other clergy members would eat it until they, er, choked).

What else? Carnivores should order the fillet, served rare over on-trend bone marrow mash, with roasted red onions and spinach; meanwhile sticky chargrilled lamb chops, pillowy-pink in the middle and seasoned with salty caponata and artichoke, come a close second. Tender octopus in a tomato and herb sauce with dark black polenta may prove an acquired taste for some, but it’s thrilling with an Italian red (perhaps an Etna Rosso – it’s BYO, after all, so you can splash out a bit).

So, after all that, our one absolute must-try dish? A meaty beef tartare served with soft quail’s egg and mustard ice cream in a dinky cornet (above), a rollercoaster of textures and tastes: by turns fiery, cold, crunchy, chunky and velvety. (Incidentally, for the sweet-toothed there are some very decent dessert ice creams, not to mention superior chocolate fondant cake, too.)

Anything not to like? Well, as the tiny dining room has room for no more than twenty punters, it’s fairly crammed in to say the least, so it won’t suit everyone. There can also be a lengthy wait between starter and main course, so if you’re speedy sippers you should take note when visiting the off license first, although there’s plenty of booze for the thirsty in the shop next door.

And it’s a tad too light on the central tables for some: we watched an entertainingly tipsy trio of women try to flick the light switch off next to us – only for it to be turned back on time and again by the waitress (who didn’t find it particularly amusing).

Food aside, what’s most thrilling is the real sense of expectation. Most tables booked weeks, sometimes months in advance – and diners are genuinely excited to be eating here: one couple arrived joyously with three bottles of wine clinking in a carrier bag. You can’t say that about most neighbourhood cafes.

So the old chestnut of being loathe to write about something stands firmly here: Anima e Cuore is really, really good, and one of the capital’s most interesting dining options – which is why, said Mustapha on our last visit, it’s booked at weekends till July.

But the good news is that, with the new hours, now we all have a better chance of making it through the door, as it’s open for both lunch and dinner in that earlier, quieter part of the week.

Open from Tuesdays to Saturdays, 6-10pm, and lunchtimes on Thursdays to Saturdays. Expect to pay £20+ a head for two courses. On our most recent visit the bill for four people was £97 without service. BYO wine, no corkage. 129 Kentish Town Rd NW1