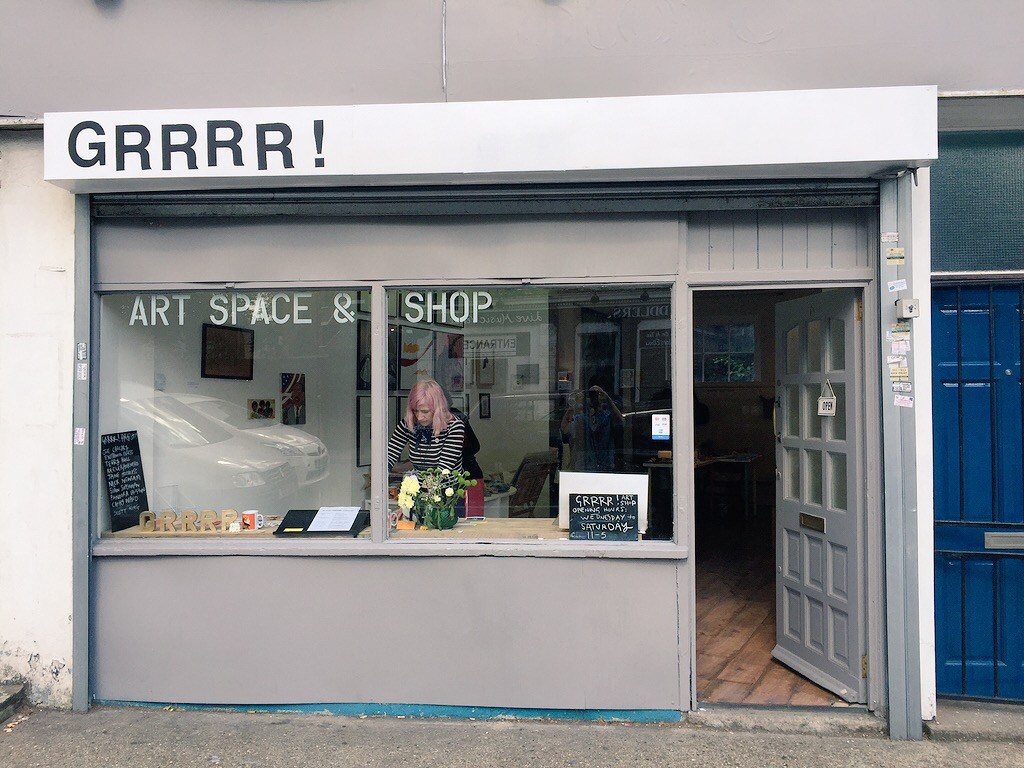 Siân Pattenden (above, right) is an artist and the creator of the popular Kentishtowner Cultural map. Her mate Pandora Vaughan is an artist who works with “people, thread and places”. This month – in fact tomorrow, 20th May – the duo unleash a pop-up at 6 Malden Road called Grrrr! Gallery and Shop. We asked the pair to interview each other about their plans, art, and experimenting.

Siân: So Pandora, tell me about the shop.
Pandora: It’s called Grrrr! It will be a place of un-ending discovery. And lots of art things to look at, buy and make.
SP: We’re selling our own art, but will have some really special guests – to be revealed shortly – showing some never-before-seen artworks. Like Deja Vu in reverse. We’ll also be selling items – material products – like art mugs, jewellery and badges. And also maps: Kentishtowner Cultural maps, and I want to create some using what I call SitNav.
PS: Have you just made that up?
SP: Yes. It’s Situationist SatNav – utilising the methods of Psychogeography and “drifting” – but in a car. So maps of motorways and A roads that go round in circles.

PV: OK. Remind me why we’re calling it Grrrr!
SP: Grrrr! as in roar. Roar as in Raw! Grrrr! as in Grrrreat and in the grrrr! of the life force.
PV: Are we running any workshops?
SP: Yes, on Saturday afternoons we’ll host loads of stuff for everyone to do, with our visiting artists being part of the theme. But it won’t be overly prescriptive or workshoppy. It might just be adding drawings to the wall or speaking into a Dictaphone. I’d like to do something with living sculptures, in a Pose Band/ Bruce McLean sort of way. But obviously, not exactly the same, as he will come after us.
PV: Friday mornings we’ll be running some dedicated art workshops.
SP: What do you think of the word “workshop”? Should we instead call them “shopworks”?
PV: Creative Training Modules.
SP: Really?
PV: Yes.

SP: What is the meaning of all this?
PV: Sharing.
SP: In what sense? Sharing in a modern, gadgety Instagram sort of way?
PV: Partly, but also sharing in the olde-talke-to-reale-people and make-stuff-with-your-hands way.
SP: We’d really like to include the community and make artworks collectively. This goes back to the Saturday Shopwork Plan. It’s a huge experiment, really. Greatly exciting, excitingly grrrr.
PV: Did we have any other ideas?
SP: Yes, some of our plans include: silent disco, short film screenings, an installation art beauty salon theme afternoon, soap sculpture shopwork, “failure” pencils, banner-making, manifesto weekend and livedraw [#livedraw]! We’re also interested in local businesses and shops getting involved, especially pubs.
PV: Who else do we have to mention?
SP: Thanks to the support of Camden Council and the Gospel Oak Business Group. They’ve been really helpful.