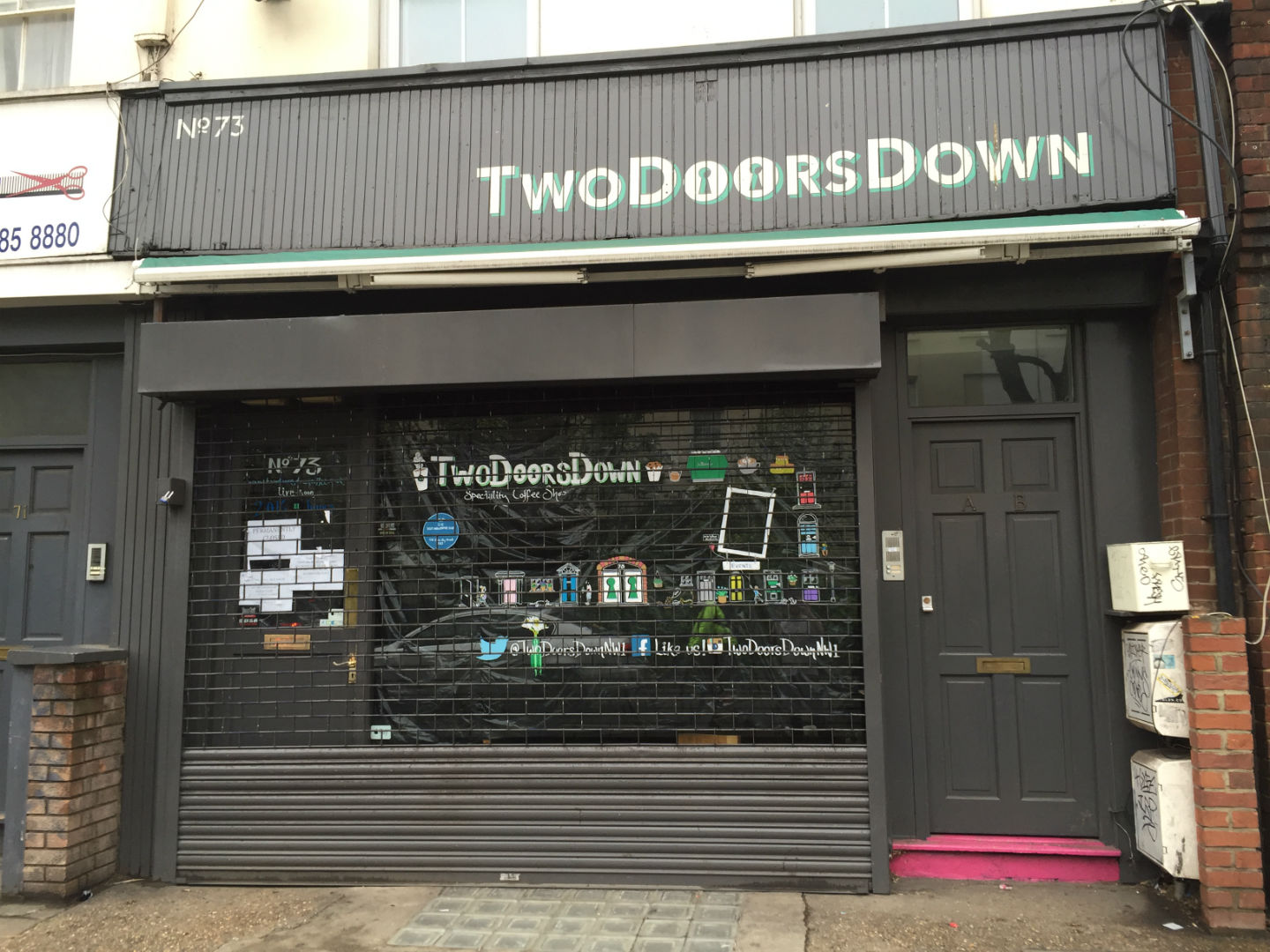 It’s been a pretty crap few months for independent closures in the neighbourhood, right? First, legendary ladieswear boutique Blustons shut its doors after half a century’s trading; then pioneering basement cocktail bar Knowhere Special and its airy sibling, the Somewhere Over Knowhere bakery, couldn’t keep up with a proposed hike in rent.

A few weeks back the chef-patron of acclaimed Fortess Road bistro Shoe Shop seared his last onglet before upping sticks to the countryside. And down near Phoenicia Food Hall Mediterranean grill Te Amo moved out of a cursed site shortly after.

The latest in the line is one of K-Town’s favourite (and award-winning) coffee shops, which inexplicably cleared out, after tweeting only last week that they were “closed today and tomorrow for a bank holiday refresh”.

“Thank you for all your support and custom over the past two years,” reads the (quite chirpy) printed notice on the door of Two Doors Down on lower Kentish Town Road. “It’s been a ball! We’re now permanently closed. Best wishes Klara, Rich and the TDD team. We will miss you all.”

There has inevitably been speculation about the reasons why on social media since, with nearby craft beer seller Caps & Taps owner Phill Elliot tweeting yesterday that the closure was because of “cash flow issues with lots of bills due at the same time.”

This is unsubstantiated, of course. But for now, we aren’t any wiser either.

@ClaireMBullen Cash flow issues with lots of bills due at the same time. Closed over the Bank Holiday weekend.

A two-floor concept, Two Doors Down made clever use of its ostensibly tiny space, with a bare wood counter upstairs, handy window seating, a small alfresco terrace beyond, and downstairs snug lounge, all cutely furnished.

Friendly owners Rich and Klara ended up back in their old stomping ground of north London after years in the south-east suburb of Brockley, where Klara was a teacher. The couple were about to abandon the capital for Brighton, before they stumbled across a disused unit which, they said at the time, costed “less than a similar-sized space” in the oversubscribed seaside resort.

An immediate hit with locals, the house coffee was roasted by E2-based Allpress, while the avocado toast and homemade quails’ egg sausage roll, hand-crafted daily by Rich, were both Instagold.

Last year Two Doors Down justifiably picked up an award for Best New Coffee Shop in the UK, no less. We wish them well; they’ll be missed.