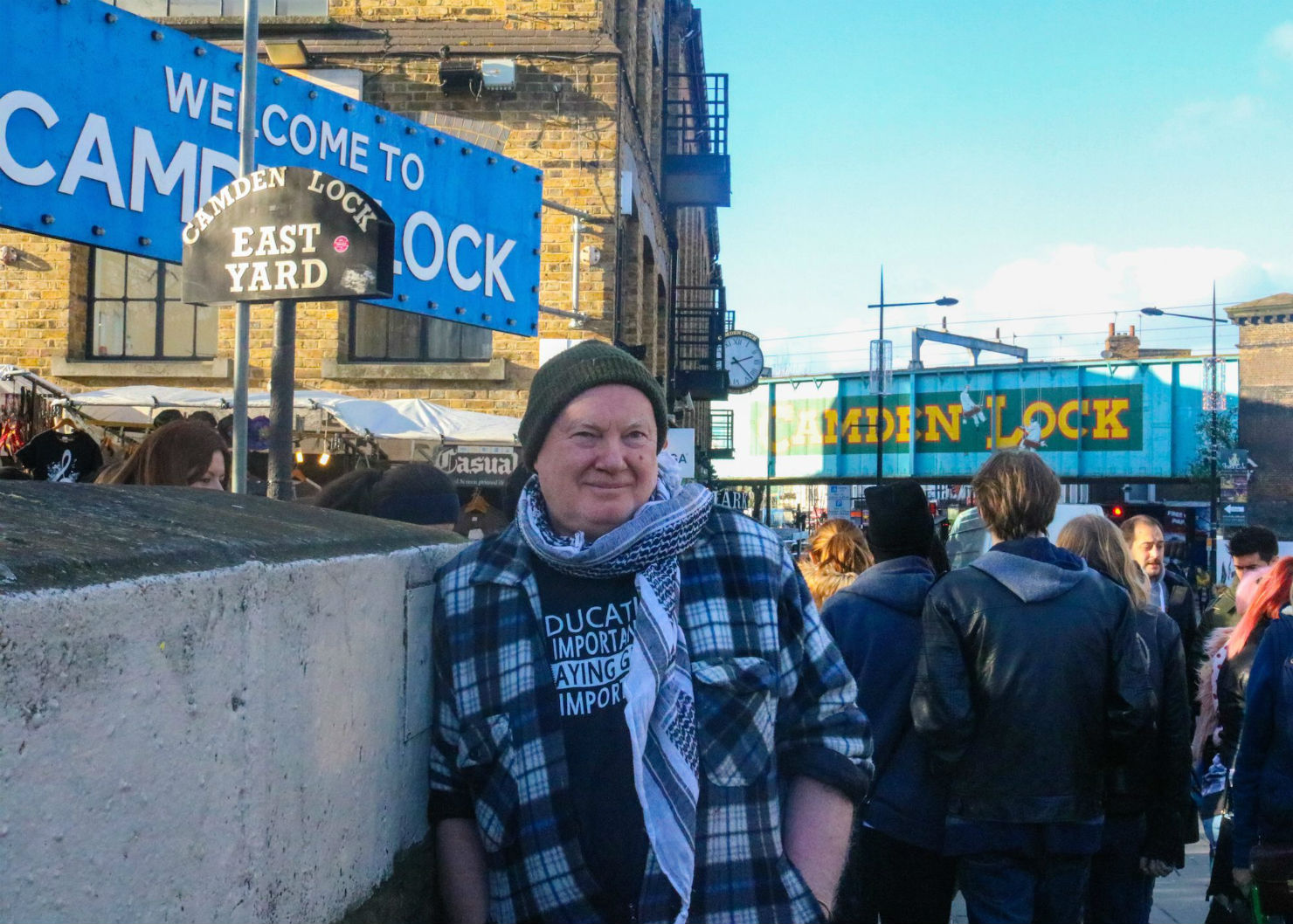 How I painted the famous Camden Lock railway bridge

“I‘d been doing sign-writing and painted hoardings all around London and someone from Camden Lock must have seen them, because they got in contact. A man called Eric Reynolds was tarting the place up and needed new shop signs. There was definitely a feeling of change, a bold new direction bout the place. I liked Eric’s working style: yes or no, get on with it, job done, no messing about. It suited my own style too.

I worked on the sign for what was then the new Dingwalls, The Cuban restaurant, and as the site was surrounded by hoardings I did a massive piece for London Zoo on one of those too. I also did Jongleurs comedy club. Never could never spell that bloody name, but I obviously did ok, as I was asked to do a satirical mural inside, no holds barred. So I took the piss out of the great and the good: politicians, royalty, the rich and famous. I loved it.

In amongst all the other bits and pieces I was doing for Eric around the Market, he asked if I could come up with an idea for the railway bridge as it was about to be refurbished and repainted by British Rail. It was that prosaic, no big fanfares, just a job on a bridge.

First and foremost the design had to be a landmark sign, visible from a distance. I knew I didn’t want it to be just a boring signwriting job, I wanted something different, something with a bit of humour in it, something that stood out.

I designed a great big fat typeface that was very easy to read from a distance and then came up with the idea of doing a trompe l’oeil over the top of it. I posed and photographed two of the blokes I was working with at the time to make it look like they were up there in the process of painting the bridge. I liked the conceit that it would never actually be finished, those two eejits would always be up there painting away. The colours were chosen because I liked them and they had a certain coolness (in hue, rather than trendiness) about them, which I thought suited the Camden feel.

A deal was done whereby British Rail would get the bridge re-furbished and painted in a colour of my choice (the background green), then I was allowed to use their scaffold to get up there and finish my design. I spent the next two weeks schlepping up to Camden on my Moto Guzzi from where I lived in Bow, working away over the traffic up on the scaffold. They were good times. I was perched way above the world, doing something I loved.

It’s my bridge. That’s it really, Camden is just borrowing it. That’s what it means to me. I thought it would just last a few years and then become an advertising hoarding like everything else in London, but it’s still there nearly forty years later. And the longer it stays there the more amazed and – secretly, of course – the more proud I become. Don’t tell everybody though.

I like to pretend it’s no big deal, just another bit of work I did ages ago, but in reality I love it to death, love walking under there knowing it’s all my own work, and love the kudos it brings me amongst street artists. I like to casually drop it into conversations – I’m such an art tart, me so humble – “yeah, Camden Lock bridge…I did that.”

A couple of years ago a guy from Camden Market phoned me and said they were going to repaint the bridge exactly as it was. It needed it, as it was looking very sad) and could I give them the spec for the colours. I was horrified. It was my bridge and at the very least I should have been asked to repaint it. They knew my number, they knew I’d done it, I’d even offered to do it a few years before.

I threw my toys out of the pram and told him to get lost, convinced they’d ruin it, but truth be told they did a good job. They’ve lost some of the subtle touches I’d originally painted, of course, but overall the feel and the colours are actually spot on.

Nothing lasts forever, and one day the bridge will come down, but for now I’m happy to still be able to wander up the road from the tube station and see it gradually appear over the rise of the canal. I did that. That’s my bridge. I made an icon.